I actually got this alien abduction costume idea from Family Fun magazine. 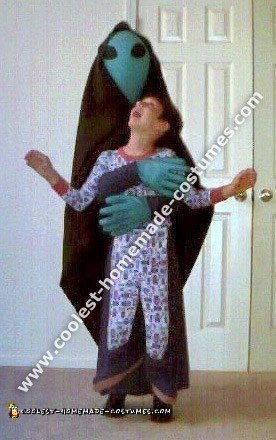 The costume was a balloon papier-mache head with a paper towel roll attached to the bottom then painted and eyes made of felt attached with glue. My son wore the pajama top with the pants stuffed with batting and attached with safety pins and slippers.

On the bottom he wore a straight black skirt. I then took a piece of cardboard approx. the same size as his back (a little taller) and attached the head, cut slits for ribbon to go through and tie around like a backpack onto his back, then covered the alien’s head with a large black sheet to cover everything.

I have the exact directions if interested. I know it sounds hard but it was a very simple alien abduction costume, just time consuming for the papier-mache head. I hope you find these Halloween ideas helpful! 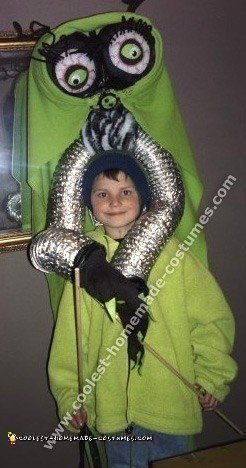 Here are a few of my costume-making Halloween ideas. I started off with a 3/4″ three foot long dowel and painted it black. I drilled two holes about 10″ down to string wires through to hold the eyes which are two Styrofoam balls covered in black fleece or felt and black and green-colored foam with googly eyes glued on. Black pipe cleaners poke into the Styrofoam at eyelash angles.

A bit further down the dowel, I drilled holes for arms to hang on – made of dryer vent with black gloves wired on with green felt fingernails glued on. The center faux zebra fur is covering the attachment of these items on the dowel. I stitched it together on top and bottom.

I used a large piece of green fleece, wrapped it around the eyeballs and tied together underneath. I made a nose out of the same black/green fleece glued together and wired it around the tied fleece. There are small dowel rods wired onto the dryer vent at the gloves for wearer to move arms.

The wearer has on a backpack, which is also belted around his waist for extra support as well as his chest (otherwise it can be top heavy). Place the dowel down into the backpack (we had a matching green fleece jacket to cover up the backpack). I hope you find my Halloween ideas helpful! 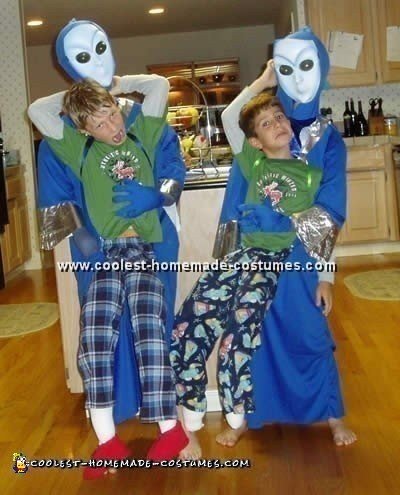 We searched for Halloween ideas on the Web and found this idea that the boys loved. We purchased large alien costumes at the costume store for about $18. It included the mask robe and gloves.

The alien’s head was a balloon attached to a paper towel roll (neck) and connected to a foam board that acted as the shoulders of the alien. The foam board was strapped to the child’s back like a backpack. Stuffed tights were taped to the foam board to act as arms. The legs were the challenge.

The child wore a belt with a leather tool holder. From the tool holder we fastened PVC pipes (a few pieces and elbows) that acted as the hips knees and legs. Another stuffed tight was placed over the PVC pipe to give the legs a realistic look.

The costume was a huge hit at school… the question they kept getting was “who is holding you?”

Good luck with your Halloween ideas. 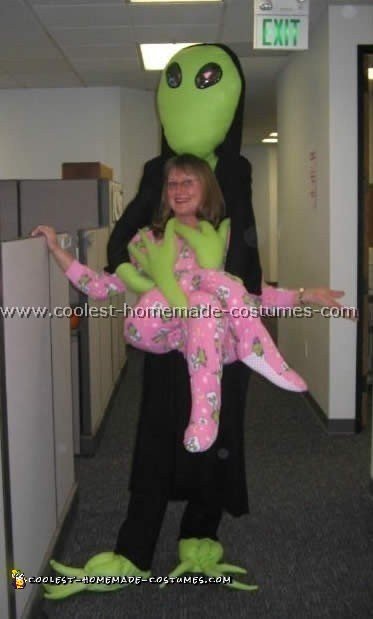 I created this costume in 2006 for our company Costume Contest and took first prize! I collect all my Halloween ideas from other costumes that I see every year. I am not a seamstress (at all) but the whole costume is hand sewn, not neatly, but I managed not to make any of the stitching show. That was the need for the sleeves and the hood on the shroud.

I found an old hiking backpack with an aluminum frame and attached a piece of PVC pipe to establish the height of the alien head and secured it with duct tape. I then constructed the head from fabric and batting. I didn’t have to be neat in my stitching because of the hood which I sewed to the top of the head. I made the eyes of felt and a scrap of shiny fabric with a little padding to make them stick out slightly.

On the top corners of the metal pack frame I placed old tennis balls to form bony shoulders and an old pillow folded over the pack to round the alien back. I attached the long skinny arms up the sleeves and taped them to the frame. Then I cut the back out of the footed pajamas so my arms would fit in and stuffed it from the waist down adding weight to the feet so they would bounce when carried. I put Velcro at the back of the neck of the pajamas so they would close around the backpack frame. Then I also used Velcro on the palms of the alien hands.

The bottom of the costume was black pants and alien feet which I sewed onto slippers. The shroud closed around my waist but was hidden by the pajamas. The trickiest part is the placement of the Velcro on the pajamas where you attach the alien hands to support the (stuffed) legs. This is what makes the effect appear real. Once that is done you are set. I spent about $100 putting this together because I brought new slippers to make the feet new pants hooded cape and footed pajamas. I could have cut it down by using more used items but time was short for me. I hope you enjoy the result and that you can also get Halloween ideas from this costume. 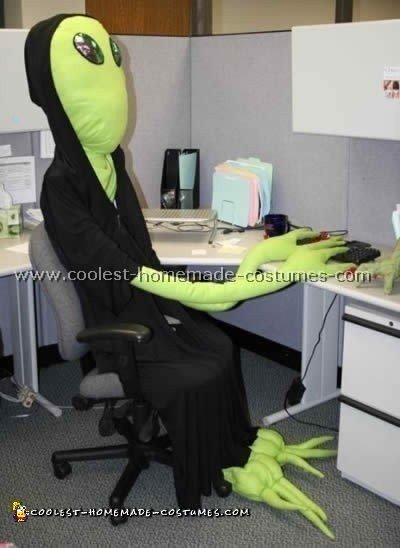 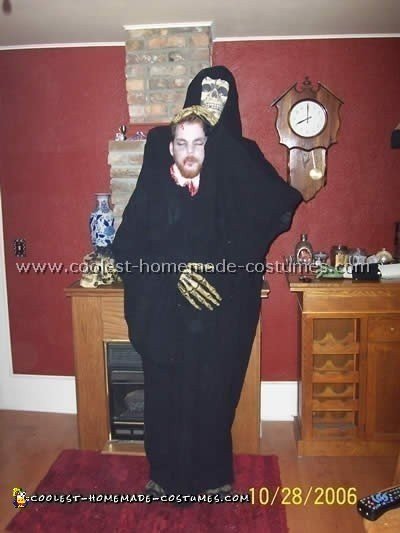 My husband and I made this Grim Reaper costume for him. Started by making a frame of PVC pipe to mount the head on the head. We inserted small flashing lights in the skull eye sockets. We wired the fake hand to the frame.

Then we made a robe to cover the whole thing with a hole for the real head. Made a tattered and bloody collar for the real head, attached the fake hand to the real head with a narrow elastic strip after the robe was on. My husband had a black glove on his hidden hand and had a slit in the robe so he could use his hand.

The whole Grim Reaper costume was about seven feet tall and pretty spectacular. 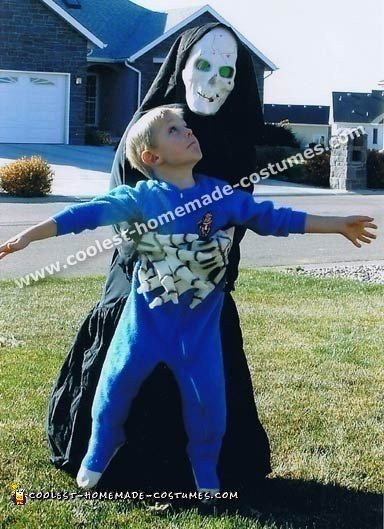 The abduction costume was created by putting a backpack carrier (the type you carry a child on your back) on the boy, and putting a blow up doll (the type you buy at a costume shop) in the backpack. This, therefore allows the head to be about 2 feet above the real person.

We then dressed the skeleton doll in a black cape with a hole cut in the front of the cape for the boy’s body to come through. You cut a hole in the back of a pair of pajamas with legs and feet. Dress the real boy in only the top portion of the pajamas and stuff the legs with newspaper.

So in essence, the boy’s legs are under the Cape (not seen) and the boy’s upper part of his body is in the pajamas.

Buy cheap hands of some sort and tie them to the fake body’s arms with shoestrings. Cut a hole in the palm of the hands and tie them together under the child’s arms to look as if the monster is holding the child.

This really is an easy skeleton costume to make and very comfortable to wear. My child had a blast with it at school and even his teachers thought there were two people! Although we were very disappointed, he didn’t win the contest we took him to, I think the judges thought his daddy was literally carrying him around!!