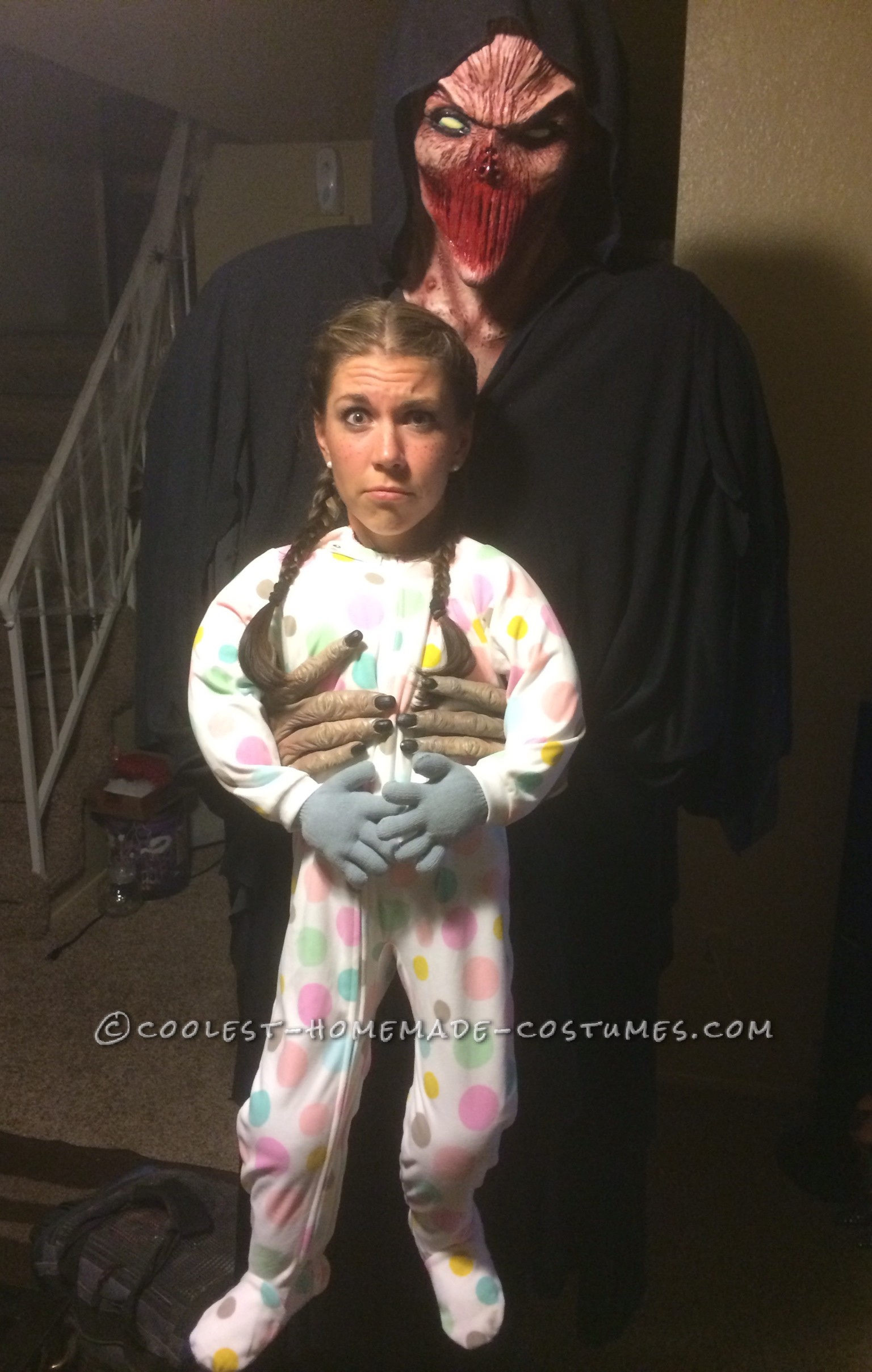 I am terrified ofthe idea of “other life forms” that may be out there and Alien abduction stories! So, I thought it would be appropriate for me to asseble a constume and make it look like I am a small child, being abducted by an Alien creature.

I started off by ordering the mask and gloves online. Then, I knew someone that had the mid-section of a mannequin. So, I asked to borrow it. I used my backpacking backpack and shoved the mannequin into the backpack and then had to use a lot of elastic straps and hooks to hold it in place. Then I bought nylons and shoved them over the top of the mannequin and stuffed those with pillow stuffing and formed them so that they would look like his shoulders and arms. Then I blew up a balloon and put that inside the mask so it would be sturdy and not floppy, and attached it to the top. I bought a cloak but it was way too small so I ended up having to buy 5 yards of black fabric and cutting/layering it all over the alien.

Then, for the baby’s body, I bought some 3T footie pajamas. I formed some wire throughout it to give it some shape and make it look realistic. Then I tried stuffing it but it didn’t look realistic because PJs are baggy and I couldn’t quite make it look baggy and also keep the stuffing formed. So, back to the store I went! I bought little girls nylons and a long sleeved shirt. I then stuffed those and ran the wires through those, and then put that in the Pjs. I used gloves for the hands and ran wire through them and stuffed those as well as sewed them to the long sleeved shirt underneath.  I then sewed the shoulders of the PJs to the black fabric of the alien creature and cut a triangle shaped hole for my head to fit through. It still looked saggy. So, I sewed Velcro to the shoulders of the child and could use that to secure it tighter around my neck. I also sewed little elastic wrist straps to some of the black fabric so that my actual arms wouldn’t show, even when I appear to be holding the baby.

Lastly, my hands. I thought it looked funny to have my normal hands appear to be attached to an alien’s body. I couldn’t find and alien type gloves at the costume shops so my best alternative were a pair of werewolf gloves I found. I spray painted them to make them match my Alien head. The paint wasn’t compatible with the plastic of the gloves and remained tacky. So, then I used face powder/compact on the gloves to make them not quite soo sticky.

People gawked everywhere I went. “By far, the best costume I have seen in my life.” was what I heard over and over. Some people laughed hysterically. Others screamed and wouldnt make eye contact. I was poked and prodded quite a bit. Just about everyone asked to take a picture with me. They couldnt believe it was just me in there. A few people asked why that creepy alien followed me soo close. I’d tell them it’s my over-protective “cradle-robbing” boyfriend. I was definitely the center of attention everywhere I went!

I didn’t compete anywhere. I just wanted to enjoy my evening. So, now I am regretting it! Haha! This costume took a lot of work and was by far, the best one in every bar! So, now I’m submitting the picture to this online contest! 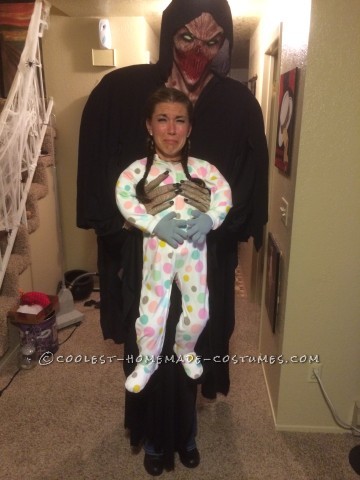