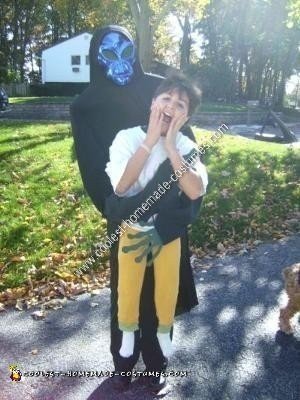 Many years ago I saw this homemade alien abduction Halloween costume in a Newsday article. A woman made it for her son and won a few contests with it. I always thought that if I had a son, I’d make it for him. My son is 10 and we made it together this year. The only 3 items we purchased were the robe, alien head and styrofoam ball.

We started by making the holder for the alien head using 2 skinny pieces of wood (one 36″ and the other 24″) putting them into the letter “t” and securing them with nails and tape. We put the styrofoam ball on the top. We sewed old PJ pants to the front of an old t-shirt and then stuffed them with newspaper. We added stuffed socks to the bottom of the PJ pants and sewed the bottoms so the newspaper wouldn’t fall out. We had to cut a big hole in front of the robe about 10″ down from the neckline so his body could pop through.

We cut a small hole in the back of an old t-shirt that was my husband’s. This was so that the stick holding up the head could go through. This would be the PJ shirt of the little boy. We put the robe with hood over the styrofoam ball adding the alien head to the ball. We also added green construction paper to the aliens eyes so they appeared to be glowing. My son wore a backpack which held up the wood to support the alien.

He wore black pants and black shoes because he was the legs and feet of the alien. When he put the costume on he first put on the shirt with the sewn on pj bottoms. Then he put on his black pants and shoes. He added the backpack. He then put the white t-shirt on over the backpack. We put the robe over his head directing the stick into the hole on the t-shirt and into the backpack while letting his body go through the hole we cut out in the front. We then pulled the “fake” sewn on legs through the front hole.

So we had my son as the body and face of the little boy and the feet and legs of the alien who was behind him taking him away. We then drew big alien hands on green paper and cut them out. We added newspapers to fill up the alien arms, added the alien hands and pinned them around his body as if he was being carried away by the alien.

It was a lot of fun making this with my son and we got many compliments and strange looks from people trying to figure it all out!! 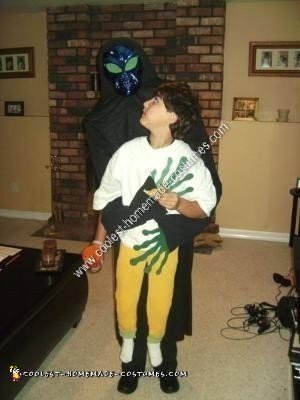