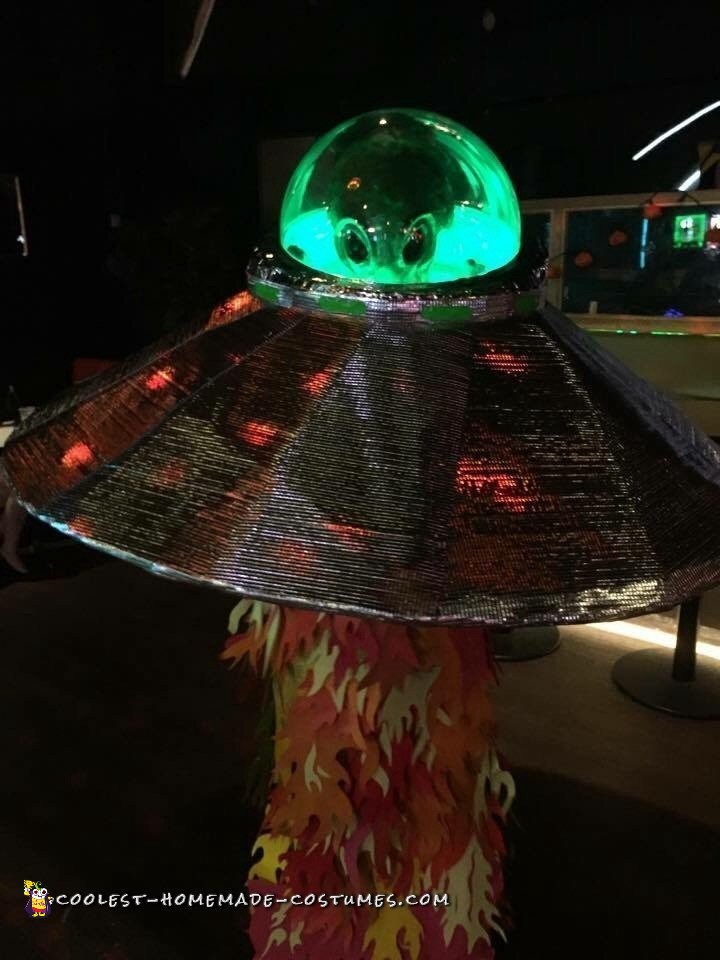 This year I decided to create an old-school Alien costume with a UFO, something that I’ve wanted to do ever since I was a kid. Some sci-fi influences include the Tim Burton film Mars Attacks!, Buck Rodgers, the Twilight Zone episode “To Serve Man” and the little green men from Roswell’s Area 51 culture.

First off, I must say that I love this website. Such amazing displays of creativity and talent! I often look at Coolest-Homemade-Costumes.com to get inspired or to have a good laugh.

For the past several years, I’ve gotten into making homemade costumes for Halloween. This hobby has definitely paid off and I have been able to win several costume contests in recent years. My friends and family are always asking what I’m going to be next. I guess I like the challenge and am always trying to outdo what I’ve done in previous years.

This year I wanted a costume that could grab a lot of attention and make a big entrance, but also one that I could take off and move around easily in. My alien costume was able to achieve both of these goals.

The alien costume and UFO took me about 6 weeks to complete. I mostly worked on it during weekends and only for a few hours at a time. My kids really liked this costume idea and they enjoyed helping me paint the face mask and doing the papier-mâché.

Because I live in Japan, I usually need a lot of extra time to order stuff online or build things myself. People here don’t really enjoy DIY home projects like they do in the USA and there aren’t many stores like Home Depot or Lowe’s. It’s often very difficult and expensive to round up paints, materials and costume supplies. What’s more, many products available on Amazon.com USA do not ship to Japan for some reason. This year I tried to buy Mehron face paint and some battery-powered LED lights (both said “Ships to Japan” on their descriptions) but the orders were cancelled on two separate occasions. I got a message that said “items undeliverable” and they reimbursed me. Not sure if it was a customs issue or the seller didn’t want to pay international postage rates. I ended up using the local Amazon Japan (Half the product selection available and double the prices) and was able to get some LED lights from China at the last minute.

As seen in the attached photos, I made the UFO by laying out a big, flat piece of cardboard and cutting a large circle. From there, I stacked circular layers in the center like a layered cake. I attached the plastic dome to the top and tied it down to the base with wire and nylon rope. For the side panels, I cut cardboard pieces out and positioned them at an angle. I duct taped them on each end and used white Elmer’s glue to stick on the silver foam sheets. Inside the cockpit, I painted it white and taped the green LED lights around the base of the dome. I cut up the foam swimming pool noodle and hot-glued it around the exterior base of the dome. I then covered it with the aluminum tape.

The UFO was a bit heavy and cumbersome to walk around with, but it was easy to slip on and off over my head. I made sure to leave an opening on each side of the dome so air could flow and also so I would have something to grab on to when carrying the thing around. Under the dome, the UFO rested on my shoulders and allowed me to see out the top. The only drawback to this design was that my hands were basically pinned around my chest- it was like wearing a couple of car tires around my torso. Another issue was that it was very hot under the dome, with the body suit / mask and LED lights. The air vents in the side of the dome helped, and I also bought a cheap, portable neck fan to keep cool. In the hot and crowded dance club, however, I could only stand wearing the UFO for about 15 minutes at a time before I got too hot. Comfort was not part of the story that night.

The alien costume face mask was pretty simple to make. I started with a kid’s Spiderman mask and simply did papier-mâché over it. I sculpted exaggerated eye sockets out of modeling clay and added 3 more layers of papier-mâché. When it dried out, I taped a paper helmet to the mask and added more layers to give it a bulbous head look. My kids helped me paint the mask with green acrylic paint. The size was perfect so it slipped onto my head like a hat and I didn’t need to use any straps to hold it on my face.

For the alien costume body suit, I simply ordered it from Amazon.com for about $40. I went to a fabric store and bought some shiny black material for the collar. ($20) My Japanese mother-in-law is an expert seamstress and helped me make the collar. We used wire inside the collar to keep it standing up, and Velcro tape to make it easy to open it / close it around my neck. She must think I’m a bit weird about Halloween, but she is glad to contribute each year.

Under the black collar, I wore the portable neck fan that I bought for about $9 on Amazon.

For the glowing necklace, I used a child’s light toy that we purchased at Disneyland earlier this year. Kids usually wear these light-up necklaces during Disney’s Main Street Electrical Parade. I think they cost around $20. I covered the toy with tissue paper from a shoebox and used cardboard and aluminum tape to hold it all together. The end result was pretty cool- it looked like I was wearing some sort of glowing amulet that changed colors green, purple, and red.

To give the UFO alien costume a flying illusion look, I decided to cut out flames and make it look like I was blasting off into space. I used thick poster board and colored construction paper for the flames. I painted some of them orange, red, and yellow and attached a small piece of duct tape at the top of each piece. I think there were about 200 flames in total. I then wrapped a yellow bed sheet around my waist and used safety pins to attach each flame, carefully laying them out like a tile pattern you would see on a house roof. The flames kind of looked like autumn leaves, and my wife said I looked like a fish, but it was the best that I could do. I wanted to add cool LED rope lights in red, orange and yellow, but those were the items that were rejected by Japanese customs on my Amazon order so I had to do the flames without any illumination effects. Oh well.

Halloween night was a memorable one. I live and work in Sapporo, Japan and every year Halloween gets bigger and better. A local dance club holds a huge Halloween party that draws almost 2,000 people. They have DJ’s that fly in from all parts of the globe and a big costume contest with great prizes.

Earlier in the day, much to my horror, I discovered that the UFO I built was too wide to fit into the back of my car. It was only a couple of inches too wide, and no matter how I tried to angle it, I couldn’t squeeze it into the back of my Subaru Forrester without seriously damaging the cardboard. I couldn’t take a taxi either, so my only options were either renting a moving truck or walking to the club. Since it was a crisp autumn night without rain, I decided to walk about 2 kilometers. It took about 30 minutes and many people on the street stared in surprise and wonder. One old Japanese lady on her bicycle came around a blind corner and shrieked with fright when she saw me. She almost had an accident, but luckily recovered at the last moment. It was a genuine, Orson Welles “War of the Worlds” moment and was the highlight of the evening.

At the club, my costume was a hit. I was posing for photos all night. The evening ended in the wee hours of November 1st with me winning the Best Costume award and a 100,000 Japanese yen cash prize. Then I had to walk back home in my UFO, a bit drunk and tired, but happy as an Alien in a strange land could be.

In the end, the UFO alien costume was a huge success and Halloween night was a lot of fun. My costume won the Grand Prize at the club, and I got a 100,000-yen cash prize. I decided to keep the UFO in my office at the university I work at and hang it from the ceiling on fishing wire. Hopefully, there will be some more people to surprise and startle in the future! I BELIEVE.

Thanks for reading this! 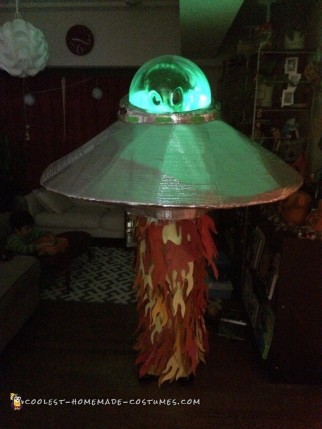 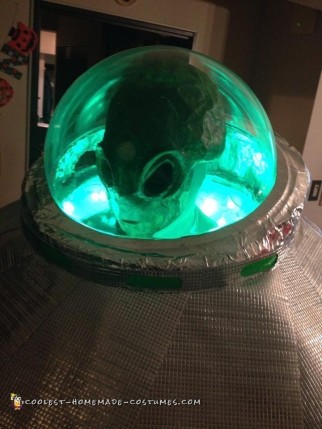 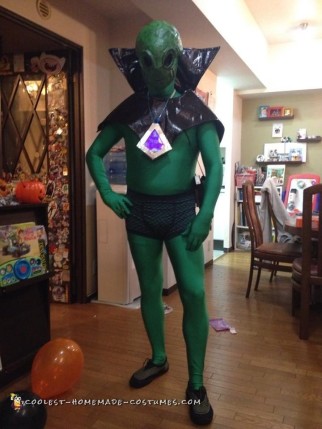 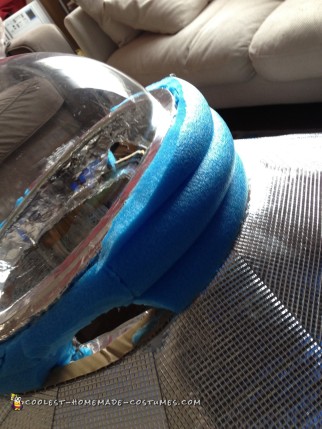 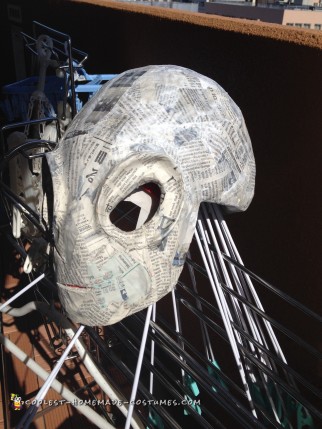 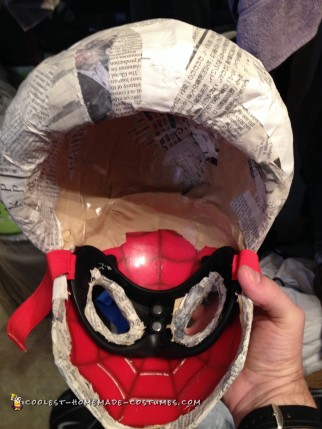 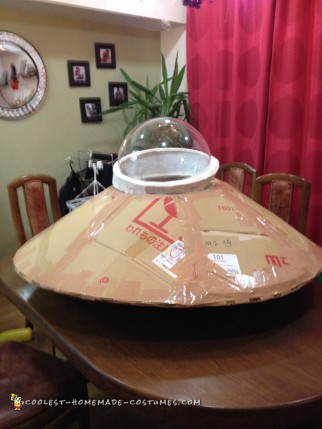 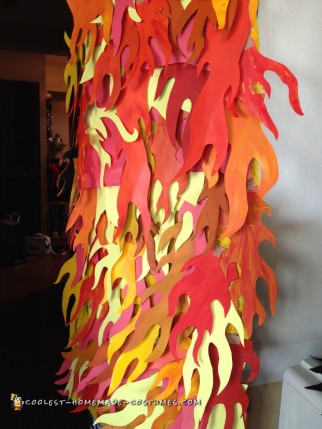 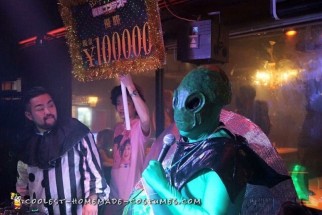