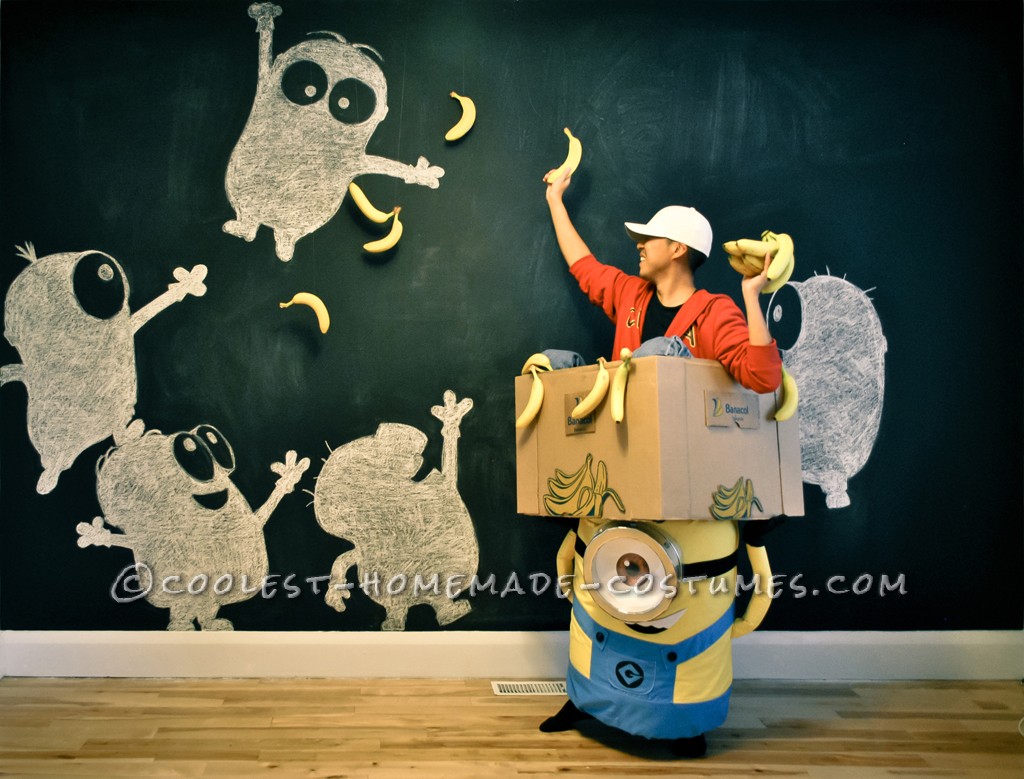 This year for Halloween I really wanted to make a minion from Despicable Me. But when I thought more deeply into making this costume, many questions popped into my head if I were to go outside dressed as a giant minion.

How would I see?

How would I eat?

How would I drink?

Would I even fit through a door to get inside the party?

How hot will I be inside the costume?

And how would I solve my biggest peeve with minion costumes; turning a character with tiny feet and a round cylindrical body into one with long human legs and a long cylinder for a body. The cons definitely outweighed the pros to make an accurate costume so I abandoned the idea of making a minion costume.

As Halloween crept closer and closer, I still had to urge to make one. But what should I do in order for it to have the same proportions as the actual character?

Then I had a thought……he can carry me!

And so the costume began… 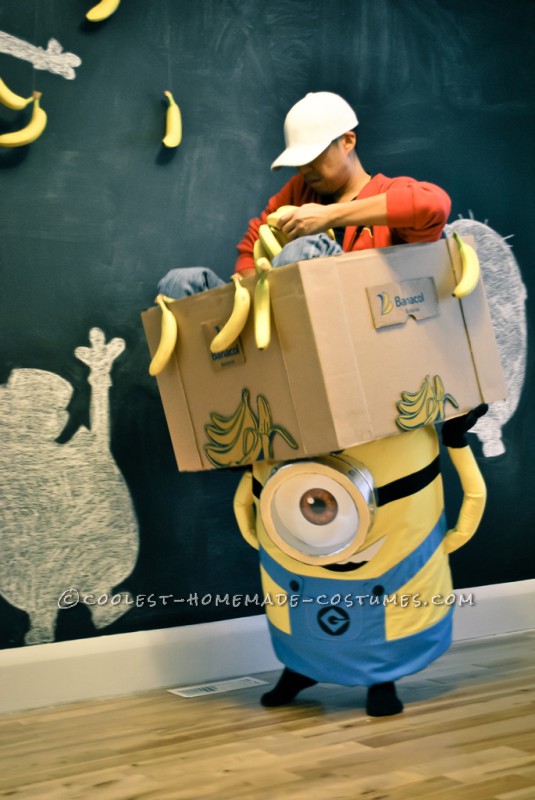 Digging for more bananas in the box

The first thing I thought of making the minion out of was paper mache. Then I thought of the incredibly long hours of messy paper mache-ing I would have to do and tried to think of some other way I could make a light yet durable body to go around my legs. I ended up finding an old wire pop-up hamper in the basement. Stepped inside it, and it was perfect. To hide the hamper wire frame from being visible out of the minion’s body I wrapped it with some mattress foam and held it with duct tape and carpenter’s glue. This gave the minion more volume and was softer to touch. The soft body would be more ideal since it would most likely be banged around a lot when walking.

Next it was off to the fabric store to find the right colours. I thought about just painting it but figured fabric would give it a sharper look. Ended up finding a nice blue and yellow on sale and bought one metre of each colour. The fabric was then wrapped around the foam covered hamper and measured. After it was measured for the right circumference, they were stitched together by my friend (so glad I know somebody who knows how to sew!) and slipped the fabric over the hamper. Next we cut out the rest of the pieces for the overalls: the front and back flaps, shoulder straps and front pocket. I created a stencil for the “G” logo and pressed black acrylic paint over the stencil to get the logo on. After that the front pocket was stitched on to the front part of the overalls. All the pieces were then placed onto the body with fabric glue. The buttons were hot glued to the overalls.

The mouth was made from black and white felt that was hot glued to the yellow minion fabric. The white was a bit transparent when glued to the black felt so I had to do two layers of white felt to make it a more vibrant white. 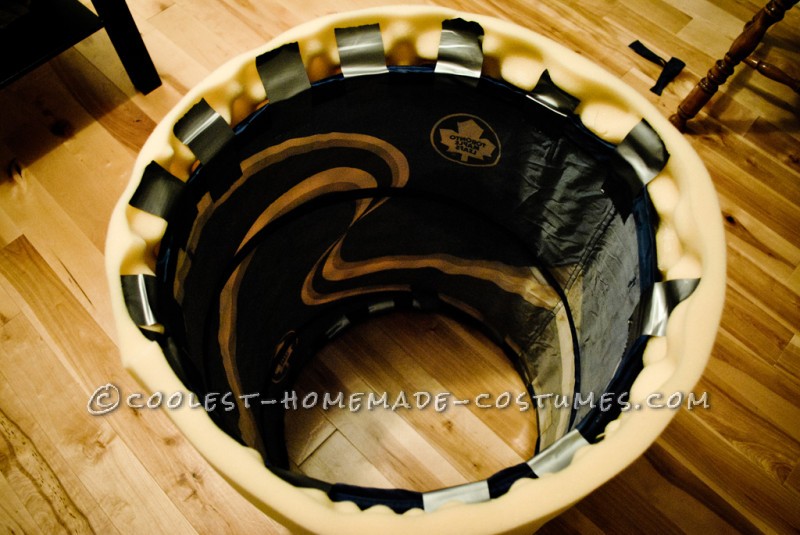 Wrap the hamper with foam 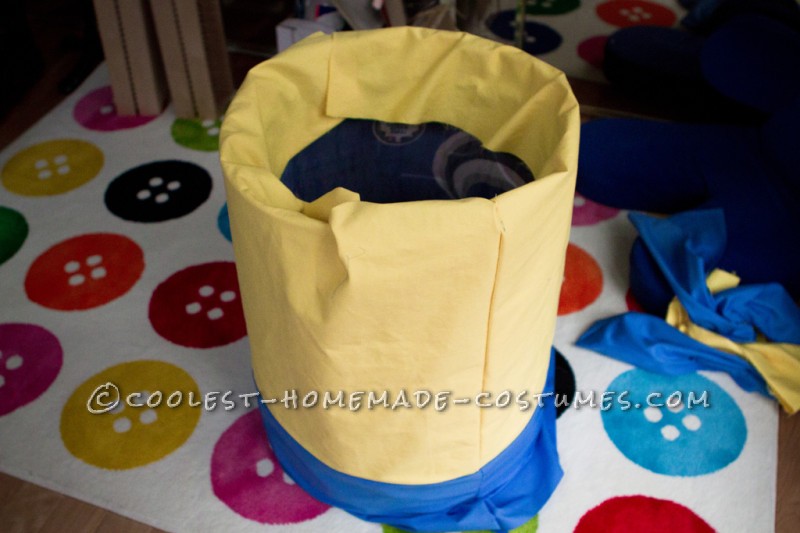 Slip on the stitched fabric 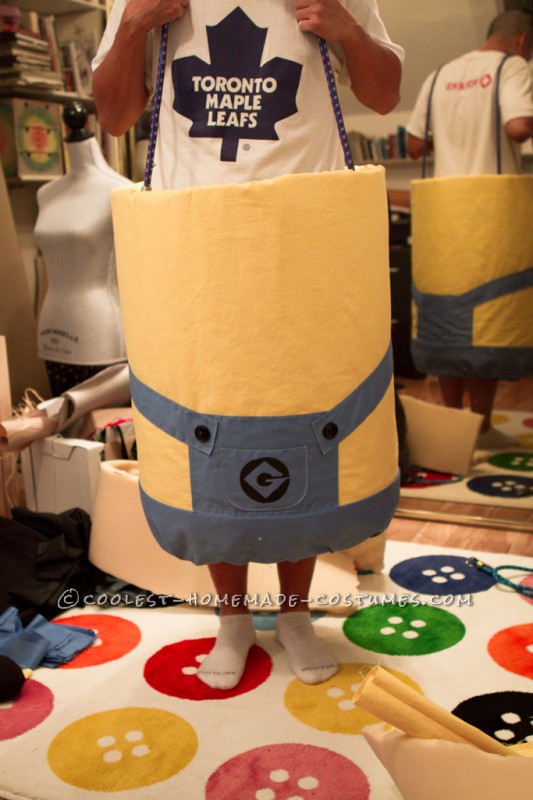 Getting there! Testing out the straps

The goggle was created from a roll of aluminum flashing coil purchased at the local hardware store. It was measured and a cylinder was made with tabs so that they could be bent back and hot glued to the parts that needed to be connected. This method is similar to how papercraft models are made.

The white part of the eye was simply white bristol board hot glued to the aluminum goggle. For the iris I  just found a high-res image of the minion and printed out the image in a 4 inch size and glued it to the white bristol board. I pondered the thought of placing clear plastic or acetate over the goggle, but since the aluminum reflected a lot of light it wasn’t necessary as light reflected off the bristol board giving it a glass look already. The rivets around the goggles were magnets purchased from the dollar store. I painted the magnets with metallic paint and hot glued them around the goggles.

The goggle was then hot glued directly to the fabric. The goggles strap was just black fabric cut from old clothing and also hot glued to the body. Hot glue definitely came in handy for this costume! 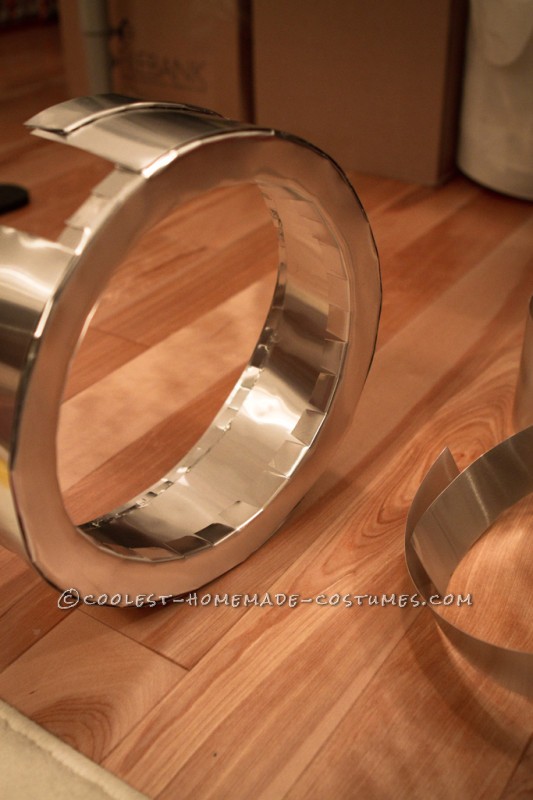 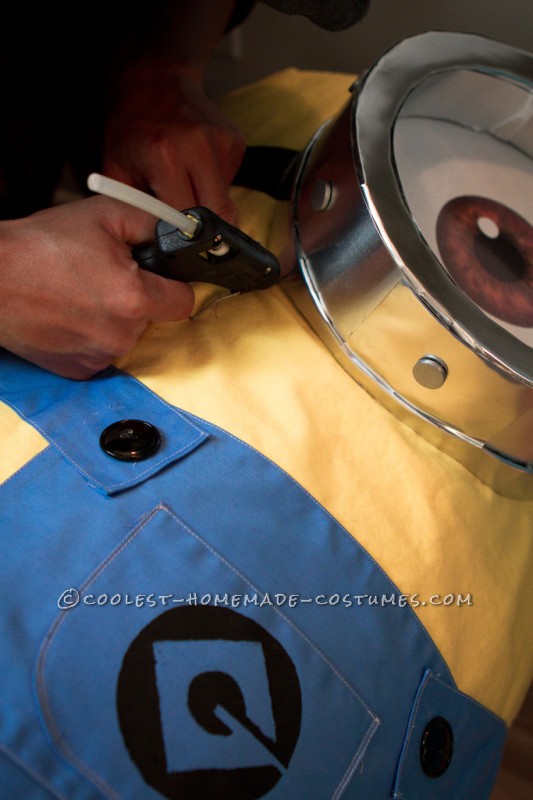 Hot glue the goggles to the body

The arms were created using the remaining yellow fabric and stitched together into a long cylinder with a pinch where the arms bend. They were then stuffed with the remaining mattress foam.

The hands were made of black fabric sewn together and stuffed with small styrofoam balls in the fingers and bits of fabric from t-shirts. The hand was stitched to the arm and the arms were stitched directly to the minion’s body. To make the hand flat, a piece of cardboard was cut out and placed inside the hand so that the palm remained flat when connected to the box. The velcro was then glued to the palm of the hand and the corresponding velcro piece was glued to the bottom of the cardboard box to ensure the hands would stay connected to the box to give the illusion he was holding it. While the hands kept falling to the ground making it difficult to attach to the box when inside the costume, we decided to sew the hands close to the top of the head using fishing line so they would be in position to easily attach the hands to the velcro under the box. 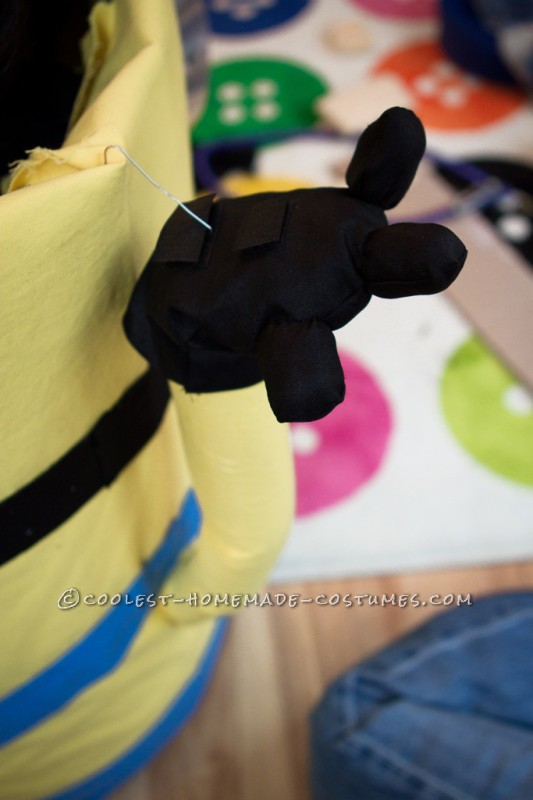 Place the velcro hands in place

This was probably the easiest part of the whole costume. I couldn’t find a box big enough at the grocery store so I took a bunch of moving boxes I had in the garage to make one that had the right dimensions. The box had to be big enough to sit on top of the minion’s head and also have room for his hands to sit where it will look as though he is holding the box. The size of the box I ended up with was 25″ x 25″. I then cut a hole approximately 1.5-2 inches smaller than the circumference of the minion. That way the box can sit on top of the minion without needing anything to hold it up.

Since the banana boxes I picked up at the grocery store were too small to actually use, i just cut out all the logos and images of bananas from the boxes and glued them onto my new box I made.

Remember to check if  the box can fit in your car!! I almost wasn’t able to bring it to a Halloween party because I couldn’t get the box into the back seat or trunk. Luckily we tried the front seat with the seat reclined all the way back and it fit. Whew! 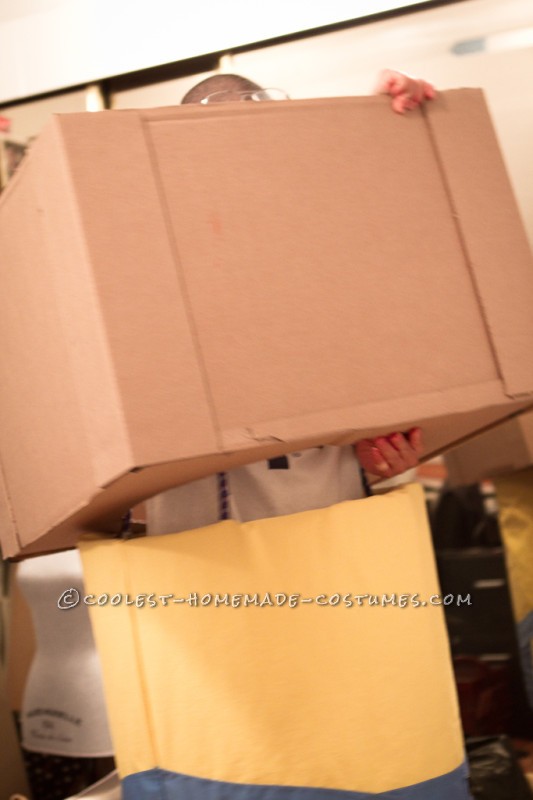 For the legs I cut the legs off an old pair of jeans. Then I taped up the bottom ends with duct tape to keep all the stuffing inside from falling out. For the lower portion of the leg I used newspaper to stuff it with and the top thigh area I used the last of the mattress foam rolled up into the size similar to a human thigh. I then bent the leg and hot glued it (hamstring to calf) so that it would stay bent and experimented with stuffing and pulling the jeans to make realistic pant creases and the appearance of a knee cap.

Both fake legs were then hot glued to the cardboard box. I placed one in each corner so that it would be more realistic and also gave me more room in front of me for arm movement. 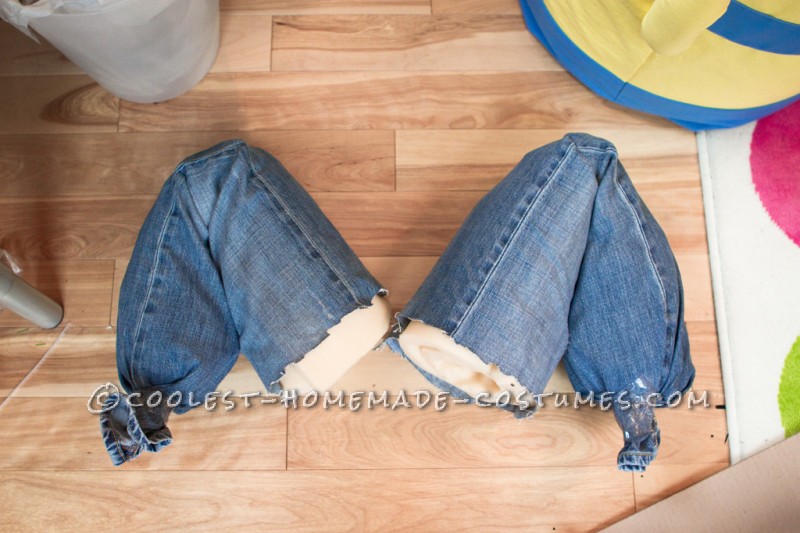 Time to put it on and head out!

To complete the costume, I tossed on a pair of black socks to mimick black shoes and wore a hoodie so that the bungee straps would be covered. Before I went out to a party I took pictures and showed family and friends. The first thing almost everybody asked was: “Wait, who’s feet are those??!?”. Followed by: “How is the bottom supporting all your weight in the box??” These were the first people to see what we had spent the past week working on so I’m glad we were getting the reactions we hoped we’d get before we started making the costume.

I put my costume on outside before entering the party and while I was walking there, somebody asked if I would come walk in front of their house to show their kids cause they loved minions. The kids were in awe and so happy!

When we got to the party the reactions were the same. You can see the looks on people’s faces as they tried to figure out how I’m sitting in a box while wondering who’s feet those belong to. A lot of people had to peek inside the box to understand! I got lots of compliments and was asked to take a lot of pictures. At the end of the night I won prizes for Most Original and Funniest costume!

My brother thought it was a cool costume too and asked if he could borrow it to show his kids as they love minions also. The look on their faces was priceless! They kept asking him if they can sit in the box with him! My brother decided to wear it to work on Halloween and he ended up winning a prize for Funniest costume too!

It was a fun costume to make and seeing the reactions and all the compliments was well worth it! We couldn’t get enough of it so we had some fun with some pictures and a chalkboard background! Hope you enjoy it as much as we did making it! 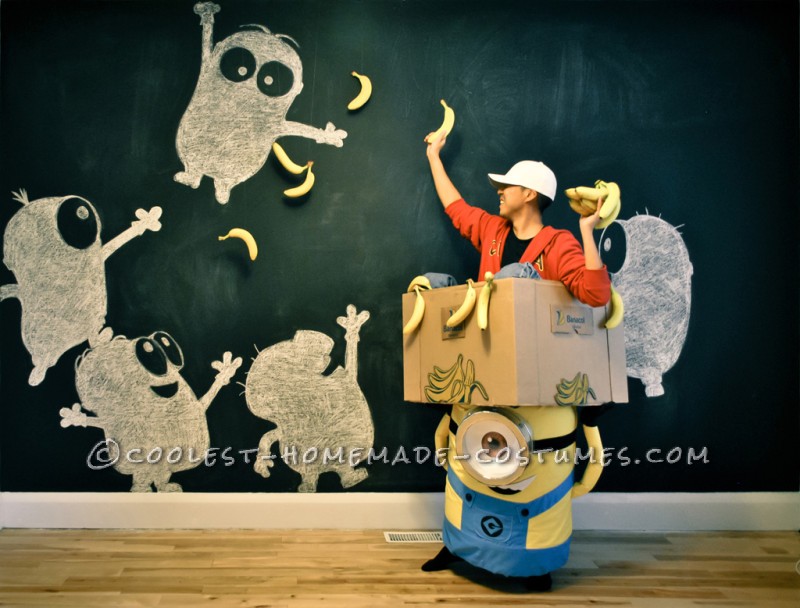 Feeding some excited minions some bananas!