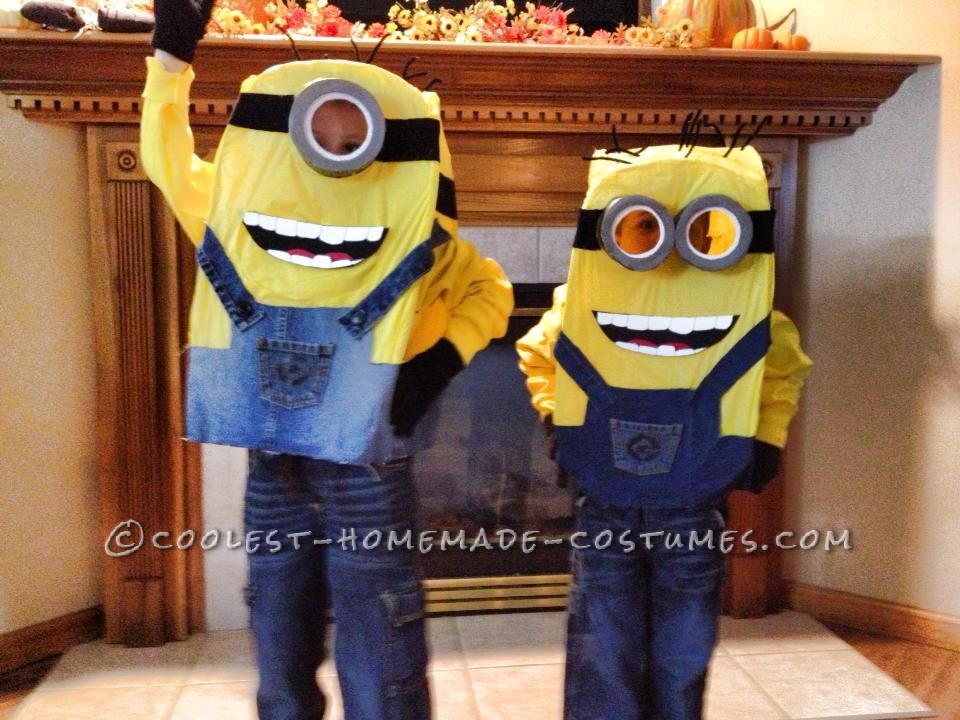 When Despicable Me 2 came out, I knew I wanted my boys to be minions for Halloween.  They are huge minion fans. After doing some research, I noticed many people used either a round garbage can or insulated foam to make the shape of the minion.  I wanted something lightweight and cheap for my boys to use so I came up with the idea of using a pop up hamper from the dollar store.  It was a great shape for the costumes.  Next came the idea of what to use for the yellow fabric.  I went to a few fabric stores and wasn’t a fan of paying over 3 dollars a yard for the fabric.  Inspiration came to me while at a Bengal’s football game.  It was a wet game, a very WET game.  Fans everywhere were wearing yellow ponchos….ponchos the colors of minions.  I knew I wanted to use a yellow poncho for the outside fabric of the minion costume.  After the game, I went to throw away some trash and at the top of the garbage can was a yellow poncho…Score!  A free poncho for my costume!

For the goggles, I used white foam piece that you can buy at Michaels for 1.00 a sheet.  I had pieces left over already at my house so I didn’t have to buy any foam.  I cut out a 2 inch rectangle and painted it silver.  I also had silver craft paint at my house.  After the paint dried I rolled the rectangle into a cylinder shape. I then made a circle about 3/4 inch thick for the front of the goggles and also painted it silver.  I cut out another circle shape smaller in size out of white felt (the stronger kind). This was to go inside the bigger circle to make it look like the outside of the minion’s eye.  I did have to buy a sheet of felt at Michaels (I used a 40% off coupon so it cost 63 cents.  I then took an old black shirt and cut it to make a 3 inch width strap to go around the minion’s head to complete the goggles.  I had each son try on the hamper so I would know where to put the goggles.  I then cut a circle and hot glued the goggles in the circle.  I glued the black strap around the minion’s head.

For the mouth I used black, red and white foam sheets.  I had these already at my house, but you can buy them at Michaels and use a coupon.  I made the black mouth first.  Then I cut out the top teeth and glued those on.  I then made a red tongue and glued the white teeth on top of the tongue to give it more of a 3D effect.

Obviously, the minions need bib overalls.  My motto is crafty and cheap so I knew I didn’t want to spend a lot of money on bib overalls.  After checking a few Goodwill stores and coming up empty handed, I decided that my boys could wear their on jeans and I could create the bib look on the minions.  I took an old jean skirt that I was getting rid of and made a bib pattern.  I hot glued each side of the bibs to the minion costume and made the bib straps.  I took a pair of jeans my boys had outgrown and cut out the pockets and glued it to the front of the bibs.  I then took 2 black buttons I had and glued them on the straps to make them more authentic looking.  For the Gru symbol, I printed out a copy on photo paper, cut it out and glued it on the pocket.  The boys wore yellow shirts under the costume and black gloves.

For the hair, I used black pipe cleaners (I had these as well already) cut into thirds and poked them through the top.  I then duct taped them on the underside of the hamper so they wouldn’t poke the boys’ heads.

Each year we go camping at a Halloween campout.  We decided to dress up as a family this year.  The boys were the minions and my husband was Gru.  He did buy the mask, and wore his own leather jacket, black pants, and my gray scarf to complete the look of Gru.  I went as Lucy Wilde.  I had an old beige trench coat that was in the garage sale pile that I dyed blue and spray painted to get the blue Lucy wore.  I then took a pair of old sunglasses and painted them blue.  I used an old photo wallet and duct taped it blue and printed out the AVL symbol and Lucy’s picture ID.  I took an old white t-shirt and cut it into a strip and painted pink dots on it for Lucy’s scarf.  I didn’t buy a wig so I spray painted my hair orange.

I had bought my daughter a unicorn costume at the end of Halloween last year so she went as the fluffy unicorn from the movie.

We were a HUGE hit at the campout.  We were stopped numerous times and asked over and over where we got the minion costumes.  The best part of the minion costumes was that it cost me less than $3 to make both costumes! I had the majority of the supplies at my house, but even if I didn’t they would have been cheap to make.  I absolutely loved how they turned out.  As an added plus, it rained on Halloween night and the boys stayed dry under their poncho costumes! 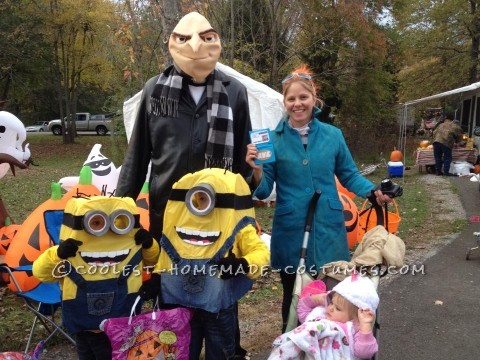 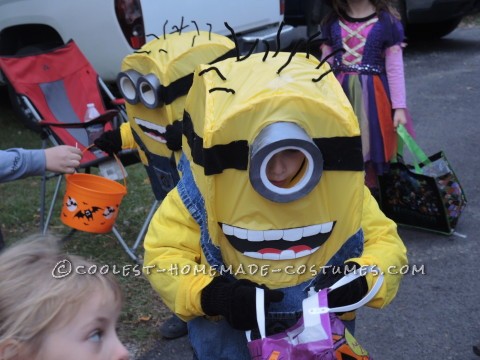 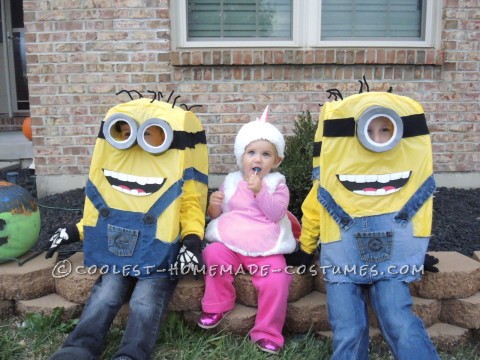 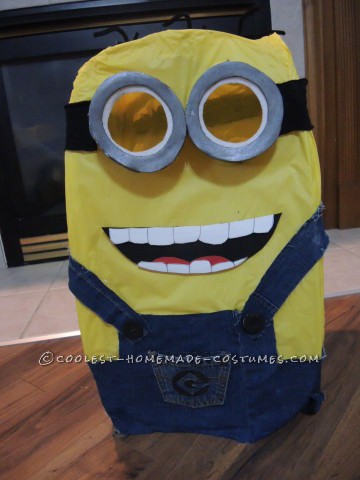 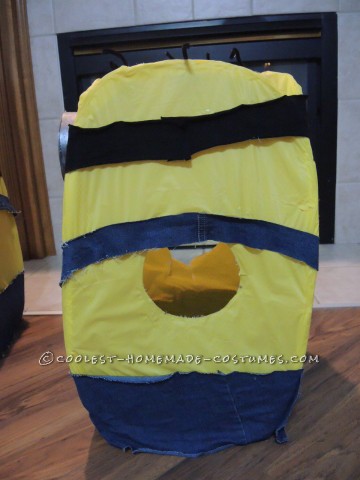 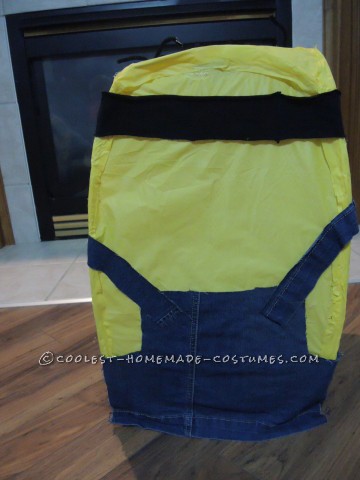 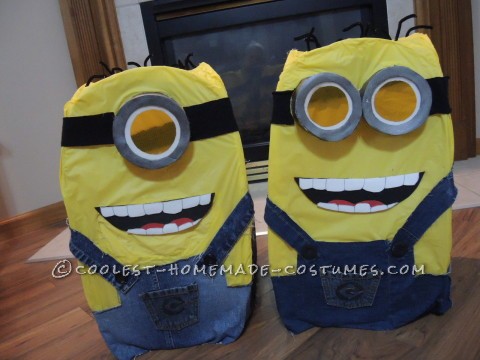 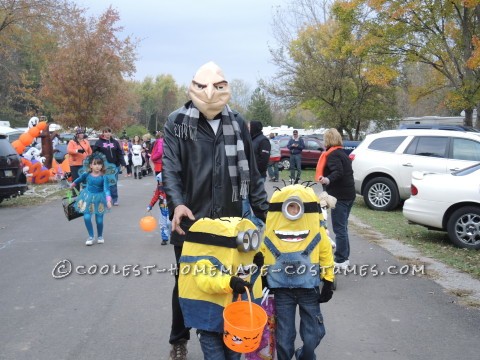 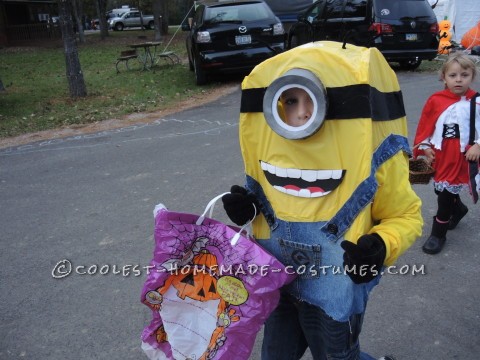