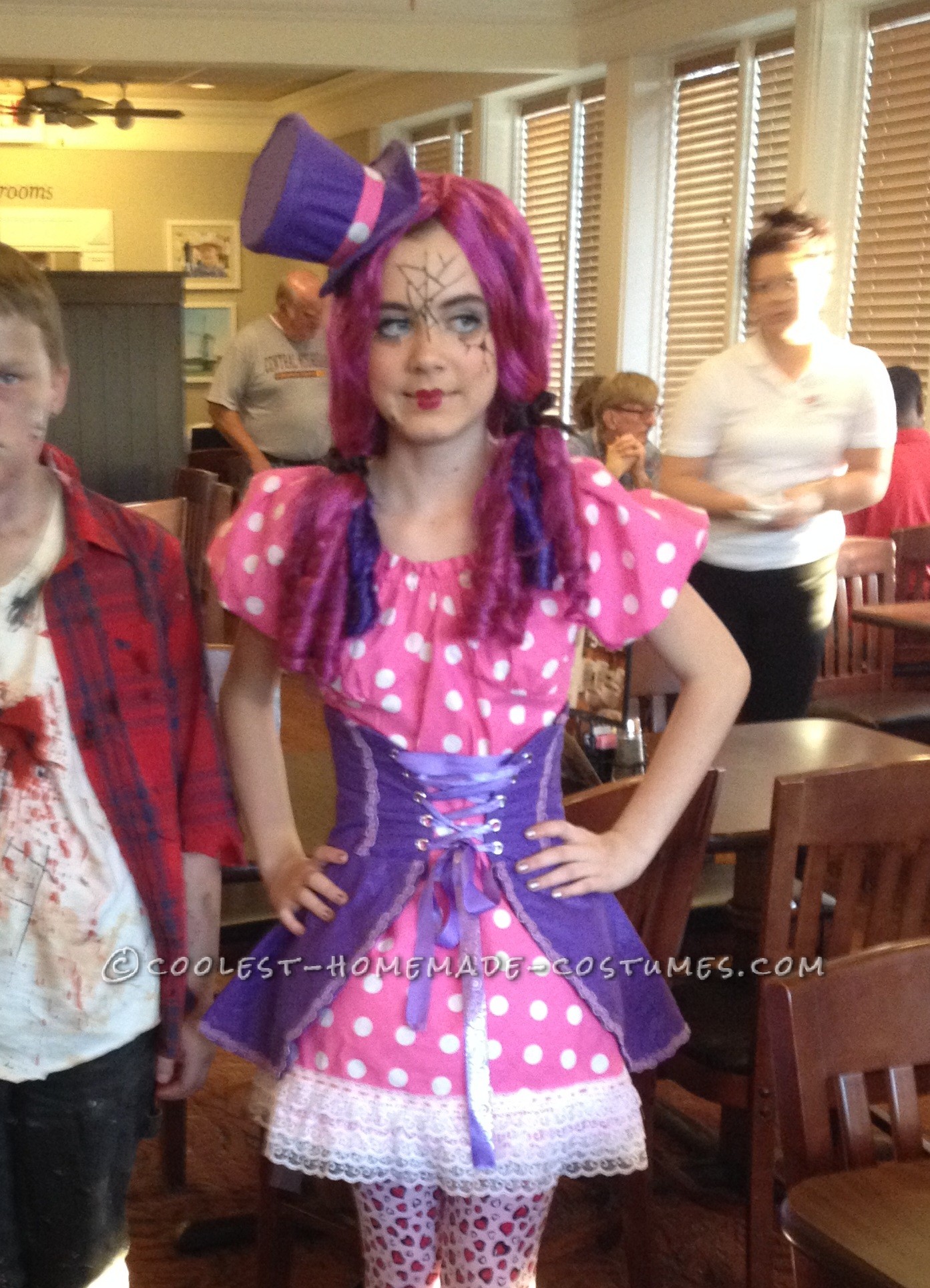 I’m entering this for my daughter:

I’m 11 years old and this is my first Halloween with my adoptive mom and she wanted to make it special for me. I saw a costume for a broken doll and that’s what I wanted to be. My mom said that we could make it and that we could make it any color and pattern that we wanted. I was so excited that we started at the beginning of September. I knew that I wanted it to be pink and purple. My mom likes polka dots, so that’s why I chose polka dots. I liked the sparkle on the purple part.

I never knew how to sew, but my grandmother taught my mom how to sew and my mom told me that she was going to teach me. So, I guess this was the perfect time. The first thing that I learned how to do was read the pattern for how much material we needed. It was confusing and I know that I’m still going to need my mom’s help the next few times. The next thing that we did was cut out the pattern and lay it on the fabric so that we could cut it. It’s not as easy as they make it look on project runway because if you have a pattern, it has to go a certain way or else it won’t look right. Thankfully, polka dots don’t get messed up too easily. The hardest part of cutting it out was making the “notches,” my mom had to help me with those.

The next step was to assemble the dress. We had to read the instructions to put the pieces together and match the notches up. This wasn’t too hard. I loved this part because I actually got to use the sewing machine! At least mom was patient with me because I was too afraid to go too fast. But, when I was using some scraps, I went really fast and pretended like I was a finalist on project runway.

After the dress was made, we made the peplum. We had to iron on the interfacing, that’s the stuff that makes it stiff. Then we put all of the pieces together like the dress. We also had to put grommets in the front where the ribbon went in it, and we put the trim on it.

The dress was too “flat” so we made a tutu to go under it by using some tulle strips wrapped around some elastic. It wasn’t hard, it was just time consuming. But, it was well worth it because it made such a difference.

Then we made the little hat. Mom did most since she burnt her fingers on the hot glue and didn’t want me to get hurt too. We cut a piece of cardboard for the top of the hat. We used a piece of posterboard for the sides of the hat. The diameter of the top was bigger than the diameter of the bottom because we wanted a “mad hatter” type of hat. We rolled the hat onto the fabric and hot glued the cardboard so that it would stick. Then we glued the bottom to the bottom of the poster board. I cut some wire for the brim and closed it with some duck tape. We covered the top and bottom with fabric, then we attached the pink fabric around the bottom near the brim. We had to glue the hat to the wig as well as putting a couple of bobbie pins in it as well to make it stand right.

The last thing that we did was the make-up. My mom did the make-up. First she made my skin look like porcelain, I really don’t know how she did it, but I want to know because my skin really looked like porcelain! She made the “doll eyes” and made it look like my fore head had been smashed in. She made some black marks to make it look like chunks of the porcelain had been broken. I think she used something called rigid collodion to fill in the missing parts, this made it look sunken in. The lips were made really small and she used this awesome velvet like lipstick.

Oh, and I can’t forget that she made me a very cool bag to go with it that I can use even when it’s not Halloween! How cool is that?

I got a lot of compliments, especially after people learned that I made most of it. We went to Greenfield Village (a historical park), and the actors kept asking my why I’d run into a wall, and why my mom made me wear such a tiny hat. But, then as I walked away, they whispered how they thought my costume was just about the best they’d seen all night. I’m so proud of myself. If you would have told me a year ago that this is what I would have done for Halloween, I wouldn’t have believed you. The way that I look at it, even if I don’t win this contest, I’m still a winner twice over because I spent some alone time with my new mom and I learned a valuable skill! 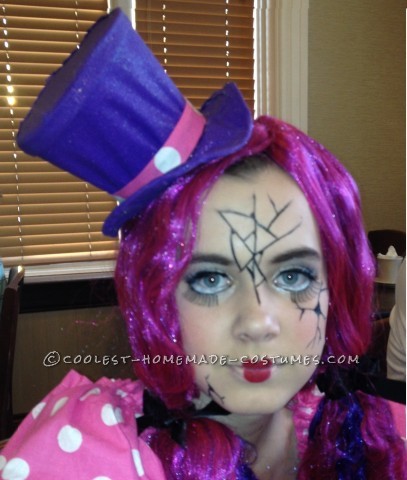 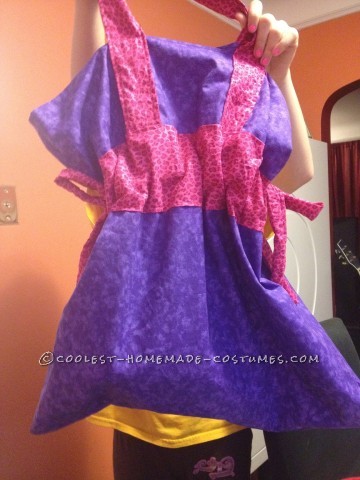 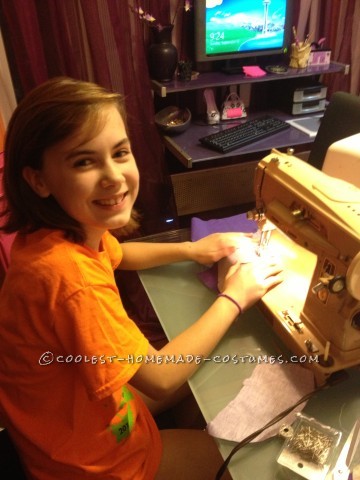 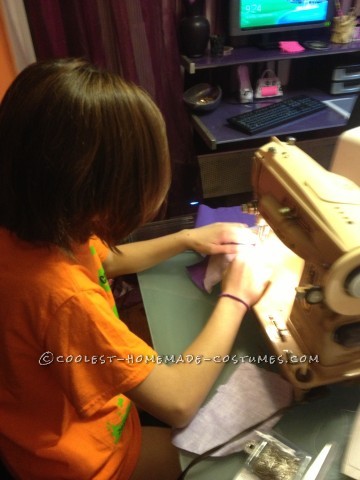 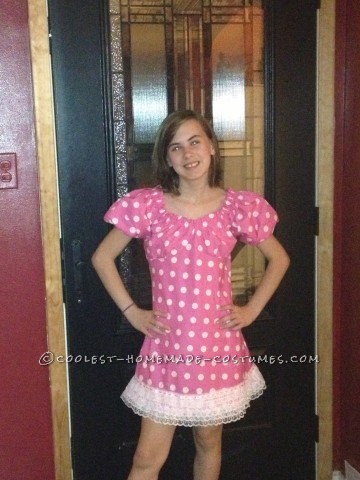 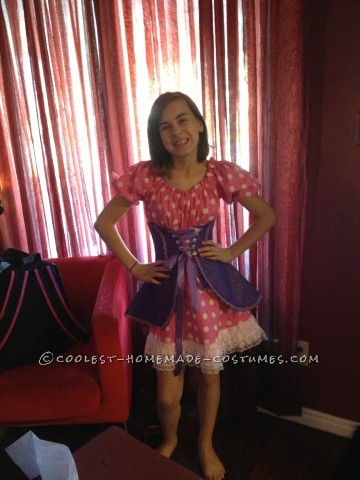 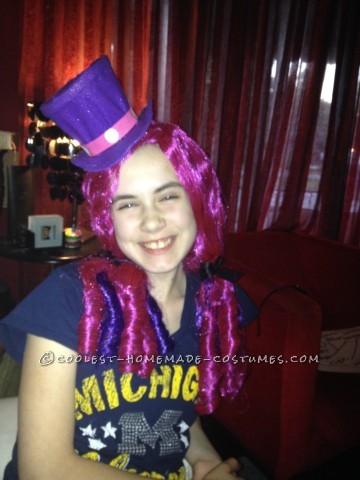 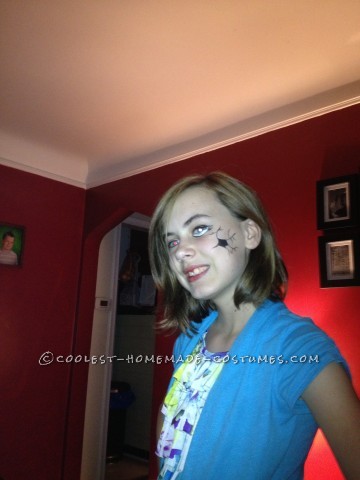 4 thoughts on “Polka Dot Broken Doll Costume Made by an 11 Year Old!”