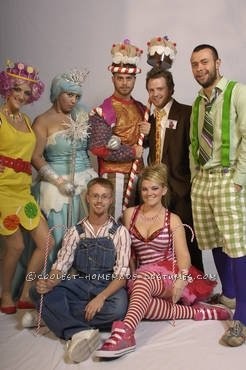 We planned Candyland a YEAR in advance. It took a long time to make. Basically we bought things for our costumes whenever we found something, throughout the year.

Princess Lolli: I was princess Lolli. I found the yellow dress at Goodwill. It was old. Long with a high neck & sleeves. I altered it. Cut the sleeves off, squared the neck, & shortened & scalloped the bottom. This took time to alter, resew, resize, etc. I found lollipop ornaments at I believe Hobby Lobby. I made them into a necklace & earrings. This was simple. I took a crossstich hoop from my great grandma & painted it yellow then hot glued more lollipop ornaments to it to make my crown. Bought the red shoes online because NO WHERE had red flats. They were like $6. Belt I already owned. I bought a Marylin wig at a Halloween stored & painted it purple. The lollipops on my dress were the most time consuming part. They are called fabric yo-yos. You cut a circle out of fabric & hand stitch the edges to itself & then pull, sintching the fabric. It takes a lot of time & I did A LOT of them. I think I had 8 on my costume. I used just quarter fabric used for quilts of random colors. Glued them onto my dress as well as a painted white popscile stick. Done!

Queen Frostine: She made her costume. She used an hold prom dress that she cut up to scallop the bottom. Added some fur fabric to make it look like snow. She added tuelle & basically extra fabric under her dress to poof it. It didnt really matter what we put under there haha. Crown she bought. Her want was a wooden dowel she painted silver & COVERED in glitter. Glitter was everywhere.. but she is known for her glitter obsession :) Then she attachted a snowflake ornament. Bought the gloves & earrings. Her wig was bought at a Halloween store & painted parts of it blue. Done!

Mr. Mint aka Miss Mint: She is our less crafty friend haha. Red & pink tutus bought. Candycane tights were bought at a Halloween store. Her tank top she owned & then painted the already existing stripes with pink glitter paint. We bought the candy canes in the Christmas section of probably the dollar store. The suspenders were actually red sequin trim that can be bought at any fabric store & made into suspenders. I think we pinned them to her skirts. Then she bought pink chucks & put red & white laces in them. Done!

King Kandy: He was the hardest most time consuming costume & the most last minute to complete. I bought a gold skirt & red long sleeve shirt from goodwill. I spent forever using gold puffy paint on the shirt to make it look like little shields. I made a million more fabric yoyos out of white fabric & glued them to his skirt & then glued a red pompom to the middle of each one. I also cut strips of white fabric (old sheet) & glued them vertically on the skirt. Got him white tights to wear (ha). I bought random pink fabric for his cape. I sewed two white fabric “tubes” & stuffed them with stuffing & wrapped them with red thin duct tape to make his shoulder pads & glued them on. I then found the giant bubble wrap & spray painted them purple & glued them on but I had to glue them on last minute before going out while he had the shirt on becaue he had really big arm muscles which stretched the shirt, & therefore I couldnt glue them on without his arm in the sleeves. His crown: I took a cookie tin & painted it brown. Stuffed it with random fabric & added a gold fabric (I think I spray painted white fabric gold) circle on top to make it look like a cupcake. Added some of the fur trim from Queen Frostine to look like frostine. Glued on some pompoms. I attached this to a white foam wreath which I wrapped with red duct tape candy cane style. Wand: I basically did the same thing for this as I did for his hat. But I drilled the cookie tin onto a wooden closet dowel. Quick simple screw drilling. Before doing that though, I painted the dowel white & used the duct tape again on this candy cane style. Done!

Plumpy: he didn’t really look that plumby. Basically we just made a friend wear lots of green. He owned the shirt. We bought the suspenders from a store. Tie & shorts from goodwill. & he owned purple baseball socks. Done!

Gloppy: (We were going to photoshop a fudgesicle in his hand but never did!) We got the brown suit from good will. I hemed the pants because they were too long. The tie we also go at goodwill & added the red polka dots. White shirt was of his own. We even made him a nametag just to make sure eveyrone knew who he was. Done!

Boy: Candycane-ish stripped shirt from goodwill. I believe I borrowed the overalls from someone, but you can get those anywhere. Done! 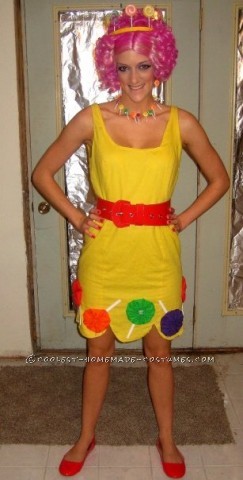 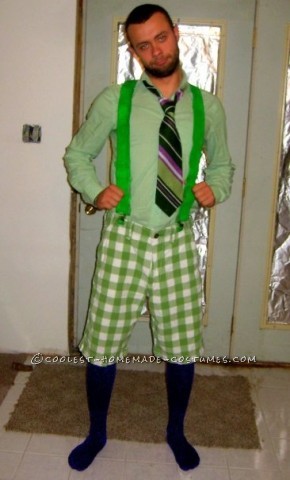 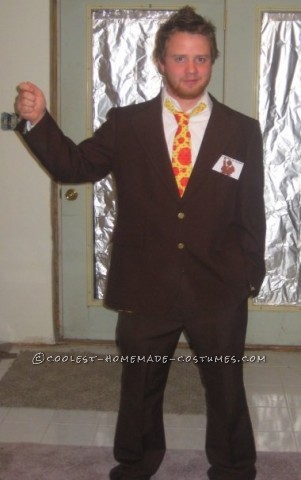 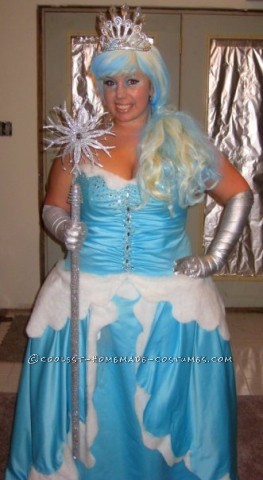 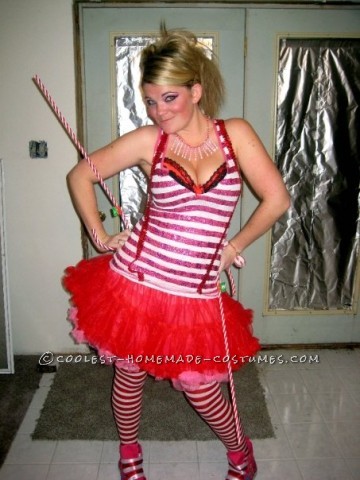 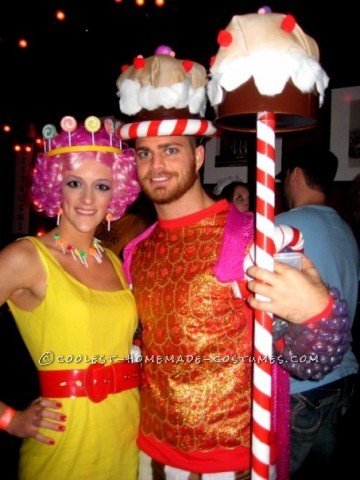