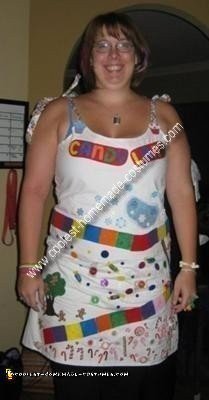 This year I decided on a homemade CandyLand costume for Halloween. I was trying to think of something fun and originally thought either cotton candy or Twister but I kept seeing Twister costumes at the Halloween stores and wanted to be something different.

So I made myself a plain white dress as a base. The dress didn’t quite end up as I had hoped at the top so I ended up just hemming the top and using ribbon as the straps. I then cut out a bunch of 2” squares of red, purple, yellow, blue, orange and green felt which I used to create the gameboard wrapping around me. I also included two special pink squares one with a candy cane on it and the other with a gumdrop on it (if you remember the game there are also cards with these on them). I made the shortcuts using rainbow ribbon.

I created the Peppermint Forest, Gingerbread Tree, Lollipop Woods, Snowflake Lake, Gumdrop Pass, and the Castle using a combination of felt and foam cutouts. Luckily all the craft stores already had their Christmas stuff out so I was able to find foam candy canes, gingerbread men, snowflakes, and other glittery basic shapes (very helpful!). I used felt to make the Gingerbread tree and then glued some of the foam gingerbread men and sparkly red circles on it.

For the Peppermint forest I glued on foam candy canes and peppermint candies. I also sewed real starlight mints using fishing line. The wrappers tear easily so people can pull them off and you can’t really see the fishing line. The actual candy can easily be re-sewn for the next party. I created a loop using elastic to hold candy canes and put a foam peppermint candy on top of it to hide it.

To create Gumdrop pass I used the glittery ovals (from the foam basic shapes packet) and cut them to look more like gumdrops. I also cut out felt gumdrop shapes which I painted with sparkly fabric glue. For Lollipop woods I used the glitter circles (again from the foam basic shape packet) for the main part of the lollipops and cut the top off some to white foam candy canes I had to use as the sticks. Throughout Lollipop Woods I sewed on Jolly Ranchers and Lifesavers with fishing line for people to pull off.

Snowflake was created using felt painted with glittery fabric paint and foam snowflakes. The Castle was also created with felt and the glittery foam basic shapes. The cupcake were sticky felt pieces I bought that I thought kind of went with the theme and I also cut out some felt candy-looking pieces which I attached on the back. I tried to create and use an iron-on logo but it didn’t work and ended up staining the dress so I created my own colorful “Candyland” to cover it.

In addition I put in some colorful clip-in hair extensions that I had from previous events and had found some temporary tattoos with a sweets theme that I put on. Under the dress I work a colorful camisole and some black leggings (looking for some colorful ones). I also wore bright red shoes, colorful bracelets, candy necklaces, and a ring pop.

A friend suggested I put Velcro on the bottom of the game pieces so that they would actually stick to the felt which worked out great. I had them on string around my wrist most the time. I took the game cards and stapled packets of Smarties on the back of them and had them in a baggy so people were actually able to play me (which a couple people did). 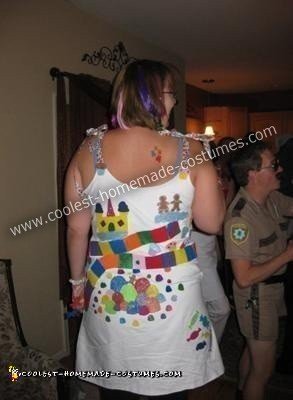