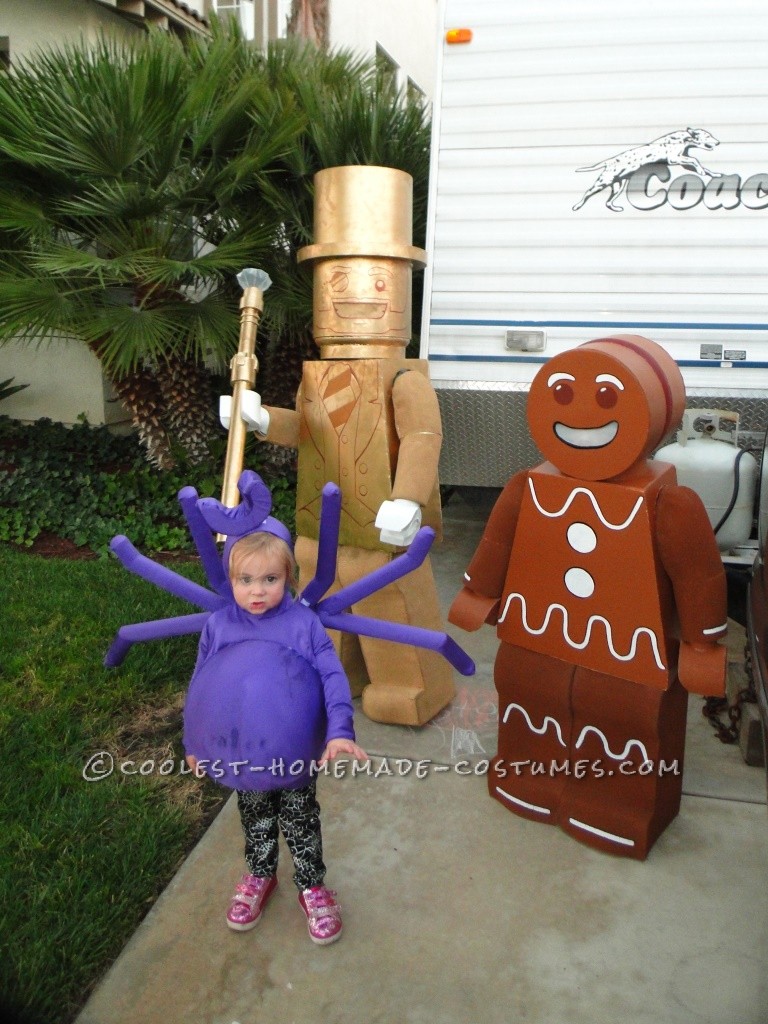 My son decided he wanted to wear his Lego Mr. Gold Minifigure costume around Legoland he loved it so much. We didn’t go very fast though because everyone kept stopping us and asking if they could take their picture with him, which he loved!! One man that made costumes for the contest said he couldn’t figure out how to do the Lego Minifigure Legs and asked what I used and if he could take a picture of them, so I explained and let him take pictures of the legs without my son in them.

When it was time for his costume contest there were some other great Lego costumes there. They called 3rd place then 2nd place and we were thinking our chances of winning weren’t looking too good, then when they called my son’s name for 1st place he started yelling and jumping up and down before he even got on stage!!!  He was SOOOOO excited!  Totally made all the time and money I put into the costume worth it to see him so happy!

My daughter’s Lego Gingerbread Man Minifigure costume won 3rd place the first weekend of the Legoland Costume Contest.  She was also SOOOOO excited that she was dancing when she got on stage!! I’ll always remember that when I look at the picture I took of her on stage with blurry arms. Her smile underneath the Gingerbread Man’s head was as big as the one on the Gingerbread Man!! Totally worth all of the time and money I put into this costume to see her so happy as well!

My youngest daughter is only 2 but stole the show when she got onstage in her Lego Spider costume. She walked back and forth on stage with the Dracula announcer and got lots of smiles and awe’s. I was just thrilled to see her get on stage and really enjoy it.  At 2 years old sometimes she can be very shy.

We also entered in one other Costume Contest on the Marine Corps base my husband is assigned to.  All 3 of them were in different age groups for this contest, and all 3 of them won! One of the men running the event came over to us and commented that they brought in a giant M&M character and the costumes that we brought were better than that!  What a wonderful compliment.  We were very excited to win on base as well!

I made the Lego Minifigure bodies out of foam boards for the front, back and sides with holes for arms and head then I glued the pieces together and painted them to match the Minifigures.  I made the legs and arms by using sheets of foam (for easier movement) cut to look like the minifigure legs and arms and glued the pieces together, but left the legs separate from each other for easier movement, then painted them.

I made the hands out of thin craft foam sheets and glue. The hands had a hollow tube like top to them so the kids could put their hands inside them kind of like a glove and move them easily. I made the heads out of concrete tubes (which I don’t recommend due to how heavy they can be), Styrofoam wreath, cardboard, see through fabric, paint and glue. The accessory for the Lego Mr. Gold Minifigure costume was made using a cardboard mailing tube, cardboard, an envelope (for the diamond, using a pattern I found on the internet), glue and paint.

I made the Lego Spider Costume mostly out of fabric and thread. I also used a large  Styrofoam half ball for the bump on the spider and pressed marbles into it for the indents the spider has, then sprayed it with glue and attached fabric to it.  I used Styrofoam tubes and duct tape for the spider legs and made it so they can be attached with Velcro. I also used foam for the U on the spiders head, as well as cardboard and glue for the circle on the Lego Spider that says LEGO.

I hope you’ve enjoyed our costumes as much as we did! 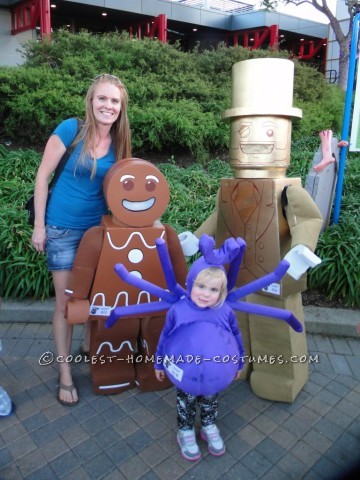 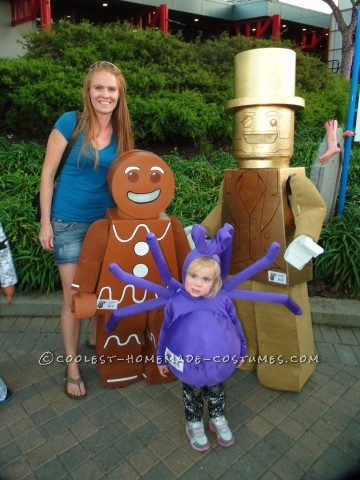 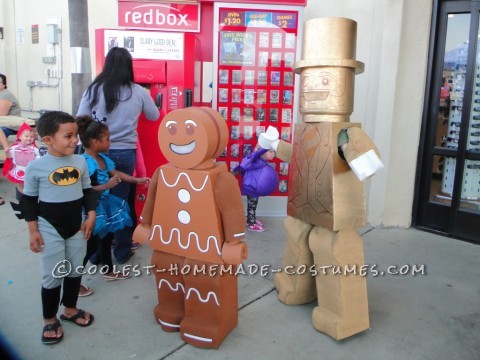 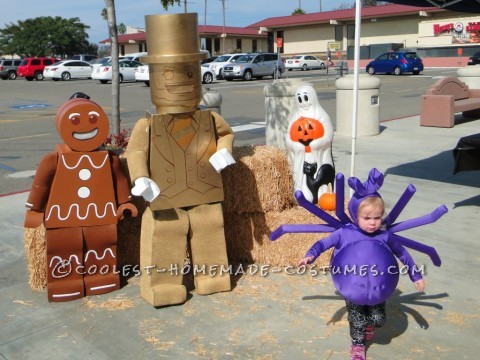 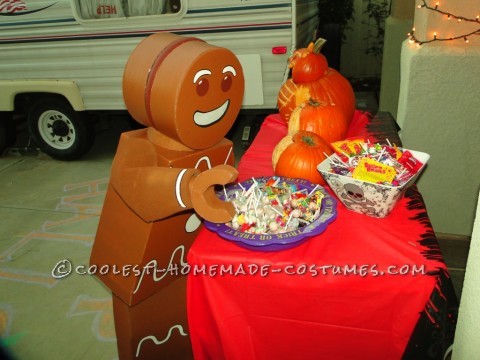 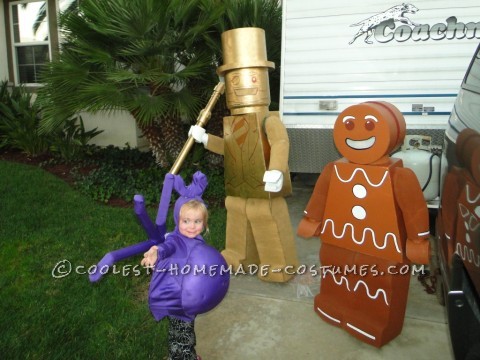 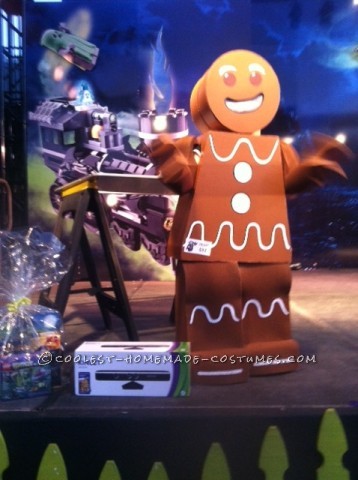 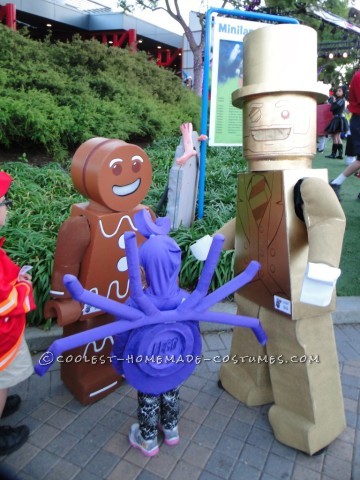