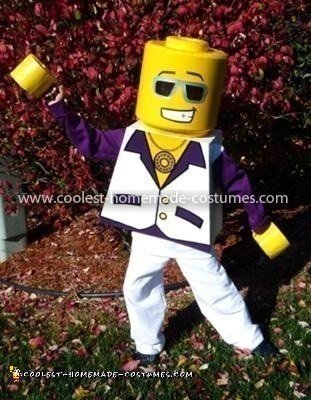 This year, my son didn’t know what he wanted to be for Halloween. After suggesting a few ideas, he finally decided on one that he liked: a Lego Minifigure. I did some research on the web, including “The Coolest Homemade Costumes” website. After collecting ideas and tips from others who have made human-sized Minifigures, I decided that I would give it a shot!

My son was worried about how it would turn out, but I told him to trust me, and that I wouldn’t let him out of the house wearing something that wasn’t cool. So, I headed to the local craft stores for inspiration on what to use to create the Disco Dude Lego Minifigure Costume. The two things I knew I needed were Styrofoam & cardboard.

I wanted to make the costume as close to the scale of an actual minifigure as possible. So, I took the measurements of the minifigure, and then measurements of my son. I wanted to make the head first, because I knew that would be the hardest. And, if I couldn’t get it to look like a real minifigure head, then I was going to have my son choose another costume idea (I’m kind of a perfectionist when I make costumes.) I knew if I could get the head looking good, then the rest would be easy.

I added a foam cushion to the bottom of the head, where it rests on the shoulders, and I added foam inside the head where it rests on my son’s head. Then I spray painted the head shiny yellow. I needed to find a minifigure face that would work with my son’s eye-level, so he could see out of the eye holes covered by black screen. I decided that a minifigure face with sunglasses would work the best, providing the largest area of vision.

My son wanted to use the face from his “Disco Dude” minifigure, so I found a photo of that minifigure, scanned it in and recreated the face in Adobe Illustrator. Then I sized up the image to the right proportions for the head and printed it out. Then I cut out each piece of the face, and glued it to the head. I cut out the sunglasses area with an Xacto knife and glued black screening to the inside of the head. My son tried on the head and loved it. It turned out better than I imagined!

The body was much easier to do. I scaled cardboard pieces to the shape of the minifigure body, cut them out and put them together with duct tape. I painted the body shiny white, and detailed the body the same way I did the head (I scanned the photo, re-drew it in Illustrator, printed it out and glued it on.) Disco Dude Lego guy was nearly complete.

Using the tips I got from “The Coolest Lego Minifigure Group Costumes,” I fashioned the minifigure hands out of Styrofoam blocks I made from gluing two 2-in. Styrofoam pieces together. Then I traced the shape of the hands on the Styrofoam and cut out the hands. We attached wooden dowels to the end of the hand, so my son could hold them. Then I covered the hands in the “minifigure yellow” duct tape.

To complete the Disco Dude Lego Minifigure Costume, my son wore a purple sweatshirt and white sweatpants to mimic the look of the Disco Dude minifigure. My son loved the costume! He was amazed at how much it really looked like a minifigure.

However, when it came time to wear it to school, he got really nervous thinking everyone was going to laugh and make fun of him. I was with him that day, helping out at his 4th grade Halloween party, and told him to just put the head on and walk down the hall with confidence. I told him again, “Trust me. You look awesome.” So, he put the head on and as soon as his classmates saw him, they went crazy! Everyone swarmed him, wanting to high-five him and tell him how cool his costume was. He was the hit of the school!