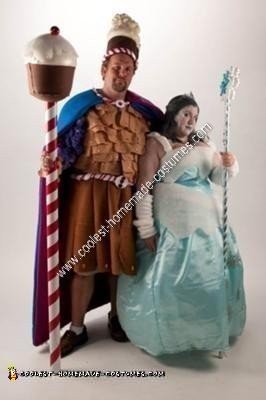 I came up with the idea of Candyland costumes when cleaning out the attic with my hubby back in August. I commented that I wished I could be a queen surrounded by milkshakes and ice cream cones and it just clicked!

Overall, this homemade Queen Frostine and King Candy from Candyland couple costume was easier than I thought, even if it was very time consuming. One of the hardest parts was the design, since they’re spaces on a game board there isn’t a lot of detail and everything’s in 2 dimensions. I spent a few extra days making the design and patterns so they would look like real characters and not just spaces on the game. I also took a few liberties with Frostine’s costume since the design on the board is very simple and boring. I added icicles to her face using pieces of homemade rock candy and spirit gum. My complexion is still a mess but I think it’s well worth it.

I made the Queen Frostine costume first. Everything except the tiara is completely home made. It consists of a large petticoat, blue satin over-skirt, corset, & arm warmers. There is a net of lights between the petticoat and over-skirt that is hooked up to 10 D batteries, the lights twinkle and look like falling snow. I couldn’t get a decent picture of the twinkling lights :(. The staff is made of a shower curtain rod and assorted Christmas decorations from the dollar store.

Next I tackled King Candy’s costume. It was made out of mostly felt (it was cheap and warm) and made 100% by hand, other than his shoes. It took me about 6 weeks just to make the King costume. The staff is pvc pipe treated with acetone to get it extra white. I then used Duct tape to get the candy cane effect and insulation spray foam to make the cupcake. I used the same foam on the ice cream cone hat. He’s also wearing a pair of thermal shorts that I made under the costume (you can see them peeking out)because we were spending the night walking the freezing streets of Salem, MA and he was worried about his “little guys”.

If anyone has any questions about this homemade Queen Frostine and King Candy from Candyland couple costume, feel free to email me and ask!! I spent 2 months of my life on these costumes and I’m kinda proud :) 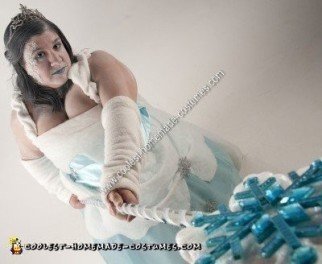 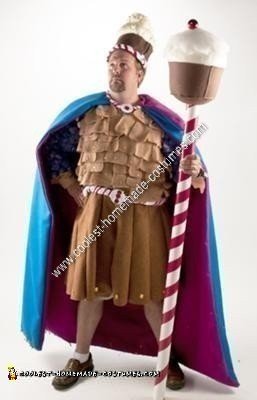