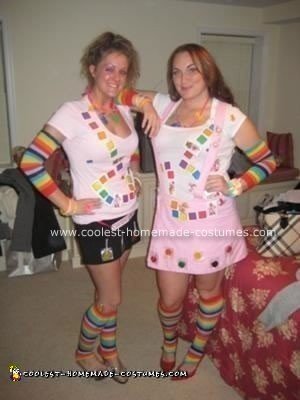 I love Halloween. Although other people may be able to pull off costumes that are seen and done on a yearly basis, I like to go away from the norm and have an original costume. Every year I pride myself with coming up with a new and fun idea for a costume. This year I decided to walk through toy aisles at Target. I walked through where all of the puzzles and games are located to see if I would get any ideas. I then spotted the game that every child loves to play: Candy Land. That’s where I had my big idea of a Homemade Candy Land Costume.

I decided to go as Candy Land, and I realized it would be even more fun with a friend. So we bought two board games, which costs less than $10. We also bought two pair of rainbow knee socks each. This was under $15. We cut off the feet part of both pairs so the socks could act as arm and leg warmers.

We also purchased candy, such as mints, lollipops, candy bracelets and necklaces, which cost us under $10. I used a white shirt I already owned, and decided to make a cute pink skirt with suspenders. My friend, however, chose to wear a black skirt that she already owned. The costume can work with various different colors.

My friend and I laid out our shirts, mine white and hers pink, and cut out the board pieces to make them a little smaller. We then proceeded to tape them on our shirts in a similar way to the game board. We could have used a hot glue gun, but luckily the tape worked fine. It took us about an hour to put everything on our shirts and it was fun eating some of the candy during the process.