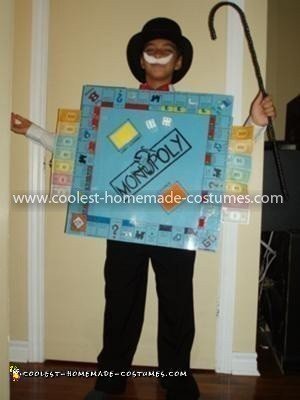 Well, last year I made an Ipod for my son. It ended being a “real working” Ipod if you will with music and a back-lit screen. He and everyone else thought it was the coolest costume ever so the bar was raised for this year! As we were thinking of ideas we thought of board games. I immediately said Monopoly and my son’s eyes lit up. Big mistake!!! No actually it was quite a bit of work but turned out great and I really enjoyed making it.

Anyway, the Monopoly Board Game Costume is basically a replica of the board game. I hand drew the board myself on Bristol board. Yes everything including the monopoly man in the middle of the board is hand drawn. Than used dollar store paint and a sharpie to color in everything. Covered the Bristol board with that transparent plastic stuff we used to use to cover school books.

Then I made hotels and houses out of paper and used double sided tape to stick them to the board. Made dice out of styrofoam and added the Chance and Community Chest cards using a stack of paper and paint.

Finally made two game pieces, the canon and the hat by hand as well. I also added real monopoly money to the sides. The money is the only thing from the real game, everything else was hand made. As a final touch, we got a top hat, mustache, bow tie and a cane (which was a Christmas cane we covered with black tape) for my son to look like the monopoly man.

All in all it was a lot of work… it’s a lot of detail creating the board but my son loved it. And now we have a big monopoly board to play on in the future! My boys also made the back of the Monopoly costume by hand. They drew it and painted it on their own. They did a great job and so it was a family project. The main thing is that my son had a blast trick or treating… and oh yeah he got extra candy too for the Monopoly Board Game Costume!!! 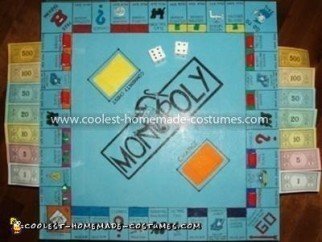 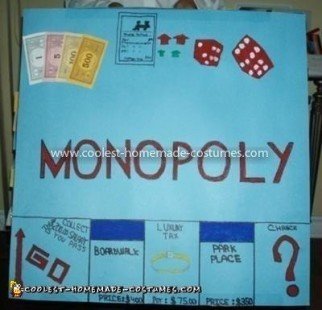