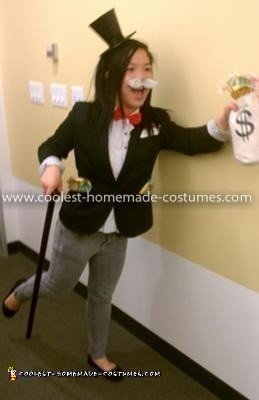 After much thought and contemplation, I finally fell in love with the idea of dressing up as Mr. Monopoly. I have a thing for wearing fake mustaches, so I think that had to be my favorite part to the whole costume. I started by searching Google images of Mr. Monopoly. I found that he wears a black tuxedo top, white shirt, red bow tie and gray pants.

Luckily I had some of the pieces already to make this Homemade Mr. Monopoly Costume. The black blazer, white shirt, gray jeans, and black flats were already mine to begin with. Now it was time to transform these items into a Mr. Monopoly costume.

I was lucky and found the actual Monopoly game at a nearby thrift store for $2.99 – what a bargain! I used the playing money to spice up my costume.

From the picture you can pretty much tell how I put together this lovely outfit – it was a big hit this Halloween and even won most original.

I spiced up my blazer by fanning out Monopoly money, stapling it and sticking them in both pockets of my blazer. I used clear packaging tape to hold the money in place. Then in the chest pocket I added the Monopoly property cards. I took three cards, fanned them out and used the same technique I used with the money.

As for optional items to make my outfit more fun I created stud Monopoly game piece earrings. I bought a bag of backings from a local fabric store it was $2 for a package of them. I them cleaned the metal game pieces with rubbing alcohol and hot glued the piece to the stud.

I also sported a lovely moneybag to add to this look. I bought the moneybag off online for $5 then I filled it with crumbled newspaper and fanned out more Monopoly money and had it sticking out of the bag—this wasn’t necessary, but I definitely think it added to the look.

Halloween is one of my favorite holidays and I’m so happy that this costume came out the way it did! I cannot wait to think up another cool costume for next year. I think this one will be hard for me to top definitely one of my best yet.