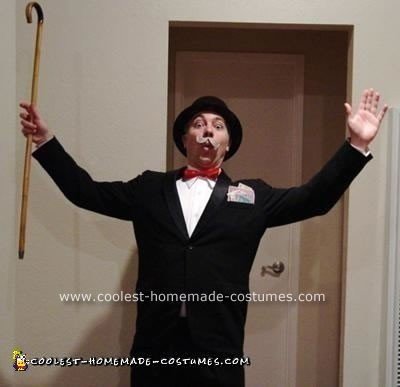 My boyfriend wanted to be the “Monopoly Man” or Rich Uncle Pennybags from the board game Monopoly for Halloween.

He bought a secondhand tuxedo suit for $30, a cane for $5 at a local Halloween store and we made out our own Monopoly money (you can actually download a patten to print out on color paper on the Monopoly board game website). He got a cheap hat too, at Target or somewhere for $5.

The hair and mustache were the hardest part of the costume. To get dimensional grey hair, we bought both silver and white hair spray (two for one at the local party store $3) and painted a brown mustache silver and then sprayed my boyfriend’s hair up to about the middle so the hat would cover it. I layered grey with white and the result looked pretty natural.

But the main part of the character is the attitude. I told him he should do that open mouthed surprised face Mr. Monopoly does on the cards when he gets money. Then again, he looks a bit Dali in the pic, but I don’t think anyone would get a Dali costume at a Halloween party.

Our total was:
Tux $30 (we plan to sell it back to the thrift store once it gets worn a few times)
$5 Cane
$5 Felt Top Hat
$3 Colored hair spray in silver and white
$3 Mustache
Free – Printed out money on paper we had