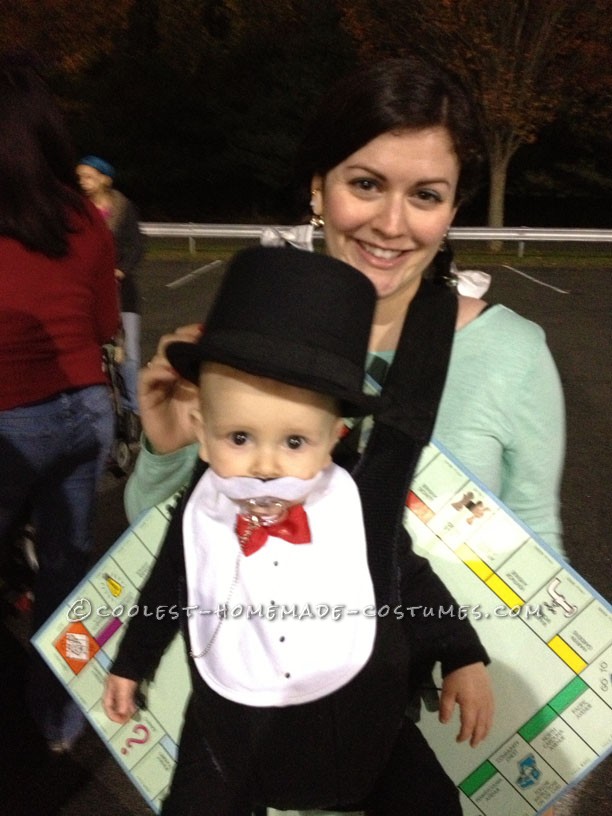 It all started with a novelty mustache pacifier we received from my parents. Once we saw Joshua with it we knew his costume needed to revolve around that rockin’ ‘stache. We rejected Mario on the basis that Daddy had been Luigi several times already and we wanted a costume that would work for the whole family. Rich Uncle Pennybags fit the bill perfectly! A quick search on Pinterest helped us find Daddy’s corresponding costume (Jake the Jailbird, complete with a Jail Spot board with the between-the-bars area cut out) but we came up with Joshua’s Uncle Pennybags costume on our own.

I knew I’d be carrying him to various Halloween events around town plus trick or treating so I wanted to incorporate his baby carrier somehow. Adding the board to the costume really helped emphasize who he was – people sort of took a second to figure it out even with the board! He spits up a lot so I knew it had to work with a bib – the bib turned out to basically function as the entire tuxedo indicator which was awesome. An elegant fob to keep his “mustache” from falling turned out to be a great extra touch. Everywhere we went people thought it was the best first costume ever! I’m glad we went for something unique; as cute as all the snuggly store-bought animal baby costumes were, I’m glad Joshua was the only one we saw with his costume!

Keeping the ‘Stache Handy (with class!)

We got keychain fobs from a craft store and used them to create a chain to ensure the pacifier wouldn’t fall to the ground when it fell out of his mouth. It also lent a touch of class. So many people are under the mistaken impression that Uncle Pennybags has a monocle (he doesn’t; they’re thinking of Mr. Peanut) so the fob really helped bring home the Uncle Pennybags impression.

The Hat (unfortunately not our own creation)

We ordered the hat from Amazon and padded the inside with foam since it was still a little too big. We tried about three different hats and none of them really worked as-is; he’s really small!

I bought some plain white bibs, made “buttons” on them with dots of black fabric paint, and hot-glued red bows to the neck. Joshua spits up a lot so we had six bibs at the ready!

His actual outfit was just a black onesie and black pants (the onesie actually had the Batman logo on it, but it was hidden by the baby carrier).

Mounting Him To The Board (or, as we called it, the Bjord)

We cut a piece of cardboard the same size as the Monopoly board and tried it on with the baby carrier to estimate where we should cut holes in the board. We cut the holes in the cardboard and tried the whole thing on before destroying our Monopoly board (purchased at a thrift shop for $2). It was actually pretty comfortable and Joshua was securely fastened (despite nicknaming it “The Bjord”, the carrier we used was actually a Belle carrier.)

I should here note that at our own Halloween party when Joshua went to bed, we had another board at the ready – no holes, just straps for me to wear, but to add some pizzazz to this one we fastened iron bars to the back, superglued some Monopoly pieces to strong magnets, and made a playable board!

You can’t really see it but Mommy’s hair bows are made out of Monopoly dollars, she has earrings that look like dice and Scottie dogs, her eye makeup and shirt both match the board and her tights are black and white striped like Daddy’s “Jail Space” costume (he’s Jake the Jailbird, but we stole that idea straight from Pinterest so we’re not posting it for competition).