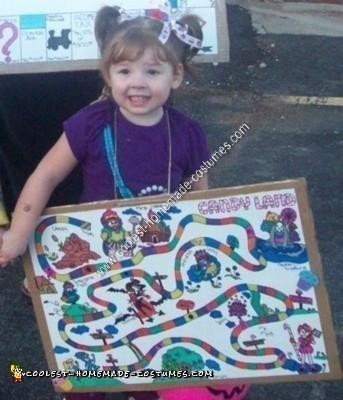 We were all going to on a Halloween camping trip and went as a themed family. Gameboards!

My 2 year old daughter was had a Candy Land Costume. Since she’s so small I cut a piece a of poster board in half, then trimmed the edges to make it a little smaller for her. Then just started copying the board. I drew all the characters first where they should be so that I could add the game trail in afterwards. I didn’t follow the trail exactly but I made sure there were the same colored spaces, and made sure there were spaces for the characters logos, and the black dot spots. After drawing I used paint pens to fill it in. After I finished I used packing tape to tape the poster board to the cardboard leaving a half inch on all sides. Punched 2 holes towards the middle and used twine so it could be easily hung over head.

I took an old sparkly pair of pants and added pastel candy pieces buying gluing them on and felt cupcake stickers. We also found a cupcake hoodie and added some of the felt cupcakes to the hoodie as well. Then used cupcake ribbon for her pigtails. 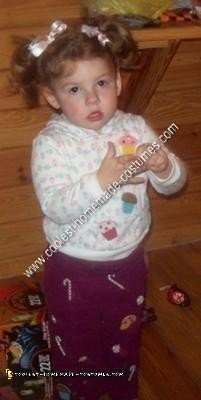 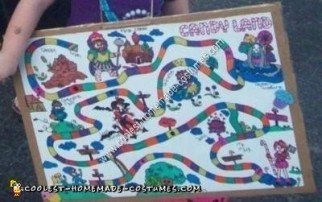