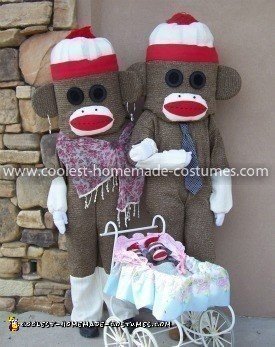 This year’s costumes were inspired by a recent Super Bowl commercial where a life sized sock monkey was driving a Kia SUV. I started this Homemade Sock Monkey Family Costume by finding a textured upholstery fabric for the bodies and heads. The store I purchased it from only had 4 yards of it and that was BARELY enough.

I did not have a pattern for the body suit, so just took a t-shirt that was larger than both kids would wear and cut it into the pieces and used it for a pattern. I just extended down from the top to include legs. The upholstery fabric worked great because it was a type of fabric that doesn’t unravel so it didn’t have to be sewn at the edges.

The arms from about elbow down, and the legs from about knee down were attached with a cream colored textured fabric, which was also used to make the muzzle, bottom area, and caps. The back of the suit was cut so they could just walk into the suit and hooks and eyes were sewn on to connect it.

The head was made by cutting out a large circle out of foam board and then gluing onto the outside of the circle a piece of poster board about 1 ½? wide to secure the foam bed pad to and also the cap onto. I cut a rectangle out of a foam bed pad and hot glued it into a circle shape and glued it to the cardboard circle and then turned the bottom under all the way around hot gluing it to the inside of itself. This part was hard to do, but did work out well in the end.

Then the kids tried each foam head shape on to find out where to put the eye holes. Then the eye holes were cut out and the upholstery fabric attached to the foam with hot glue. Then the eyes were cut out of the fabric. The “button” eyes were made out of small Folgers coffee can lids. They were plastic and so I cut a hole out of each one and glued a black mesh fabric inside them.

These blended so well while trick-or-treating people were commenting on not knowing where they were seeing out of the costume. The ears were two half circles sewn together and then turned right side out and stuffed with same shape foam pad pieces. Then these were hot glued onto the head.

The muzzle was two oval pieces of the cream colored fabric sewn together leaving a small space unsewn to leave for stuffing it. Then it was turned right sides out. I cut out the red mouth piece of fleece and used a very large needle and sewed on large stitches with black yarn. Then that piece was hot glued to the front of the muzzle piece.

The muzzle was hot glued onto the face and stuffed with pillow stuffing and then I hot glued shut the opening where the stuffing had been pushed through. Rounded black buttons were glued on for the nostrils. Then I cut about 6 pieces of poster board strips that were about 1 ½? wide by 26″ long and hot glued them around the top of the cardboard circle head overlapping them as I went (forming a cone shape) and then stuffed shipping paper wadded up under them (to keep the shape).

Then to make the cream colored cap 6 rounded triangle shapes were sewn together and draped over the whole thing and secured with hot glue. Then a red fleece strip was glued around it to look like the folded up part of a cap. The bottom area was made by cutting out an oval shape of the cream colored fabric and gluing a red piece of fleece to it and then gluing it to the appropriate spot on the back of the suit.

Then a tail, after being sewn together and stuffed, was sewn onto the bottom area. I cut out a large cardboard circle pom pom pattern and my daughter wrapped red yarn around it (over and over) and cut the edges and tied the yarn together to form a pom pom for the top of the cap.

Mr. Sock Monkey (our 14 year old daughter Taylor) wore a tie. Our 11 year old son Dalton, since he’s shorter than Taylor, was Mrs. Sock Monkey and sported a large scarf around “her” shoulders as a shawl connected by a brooch. We also bought huge hoop earrings from WalMart and hot glued a pair of dress-up heart shaped earrings to them.

They both had so much fun trick-or-treating and heard all night, “Can we take your picture? These are the best we’ve seen tonight!” One house gave them a 2-liter bottle of Coke for being the best costume of the night. The ten month old sock monkey babies Charlie and Charlene (Taylor and Dalton received these 10 months ago for Christmas) did very well all night. Most babies do love to be strolled! 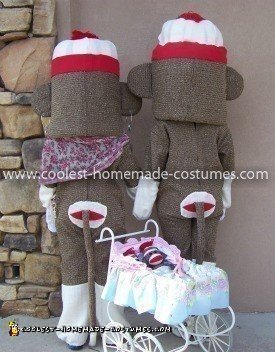 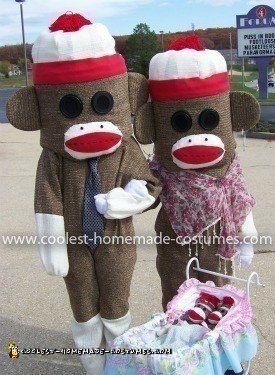 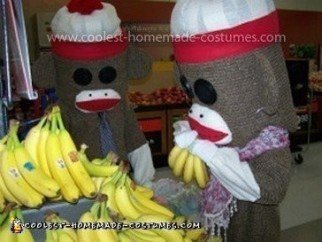