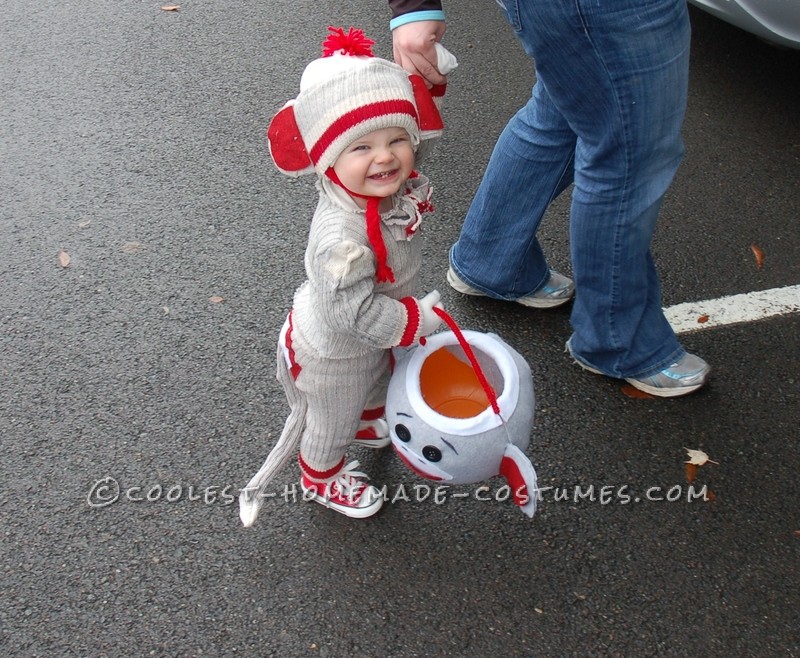 My dilemma this year: how to out-do last year’s costume (a wee baby Viking), plus make it warm (we live in Washington), and comfy (or my son will try to rip it off), and last but not least durable (for a very active one year old). Luckily, I didn’t have to search quite as long this year for an awesome idea.

While browsing Pinterest, I came across a picture of an adorable little boy dressed up as a sock monkey. I clicked on the link and found out the costume was made out of actual socks, which to me was just too cool. I read over the blogger’s description of how she made and set about coming up with my own version.

After I had my idea drawn out and a plan in place, I searched for the perfect socks. I found a 3-pair pack of men’s wool work socks on Amazon that I knew would do the trick and placed my order for three packs (9 socks total). I also ran to my local craft store and grabbed some red felt, some white felt, and some grey fleece-like material. From there I went to Wal-mart where I picked up a white knit hat, white mittens, and some red yarn.

I started with the hat, cutting two socks just below the heel. Then I cut off the toes to use for ears. I turned everything inside out (with the ears on the inside) and sewed up the sides, using the white hat as guide for sizing, After I was done sewing I made sure it fit over the white hat (sort of like a headband) and voila! The hat was 90% done. I added felt semi-circles to the ears for a pop of color and added a simple yarn pom-pom on top and yarn tie-ons on the bottom. Then I hemmed the top of the sock headband to cougher up any rough edges from cutting.

The pants were suuuper easy. All I did was cut the toes off of a pair of socks and and pin them together to look like pants ( heels together with toes facing away from each other) and then cut off the toes to make waistband. My friend sewed them together and then I lightly sewed the waistband onto a pair of oatmeal colored thermals so they would stay put (and for the added warmth). That way there was no elastic needed! When you sew the socks open there will be a whole in the crotch. I left it open since he has the thermals underneath but you can also stitch an extra toe of a sock in there to close it up.

The tail was pretty easy as well. I took one sock, folded it in half, and cut it down the middle. Then I turned it inside out and sewed up the cut edge. I stuffed it with pipe cleaners braided together (to make it moldable). On the pants I stitched on two felt ovals, one red and one white (with the white being smaller than the red), Then I cute a small slit in the middle of both and stuffed the tail in, securing it with a few stitches,

The shirt was a little more complicated. The front and back panels are two pieces of sock sewn together ( if you use socks with lines in them, make sure the lines match up!), One I had the two panels done I sewed them together leaving holes for the head and arms. The sleeves were done using two socks ( one for each side, cute just after the heel heading toward the toe). I pinned them in leaving the heels out as shoulders and then sewed them to the body. (I had to do some resizing to the arms  so it might be easier to cut the socks on the inside seem and sew them to fit using either measurements or another long-sleeved shirt as a guide). One the shirt was done I added a boy tie I had made from scrap socks using hotglue and then stitched on a little red felt heart with a “C” in the middle of it (my son’s name is Carter).

Since I’m an accessory gal, I also created a sock monkey trick or treat pail to go with the costume. I took a regular orange pumpkin pail and glued on grey fleece (gluing only on the bottom and inside). I covered any seams and folds on the bottom with red felt and on the top with a thin strip of white felt. Then I made little ears like the ones on his costume and used the felt design from the back of his pants for his mouth. I added some button eyes and some sharpie eyebrows and then wrapped pipe cleaner around the handle to make it red. It looks like a lot of work but it only took me an hour or so.

Then we added the mittens and the converse and he couldn’t be a cuter sock monkey. I call it a sock “hop” monkey cause I think with the bow-tie and everything it looks kind of 50’s style. So far, everyone is loving the costume, I can’t tell you how many compliments I’ve gotten. And the best part is there’s no way there will be a million kids running around looking just like him! 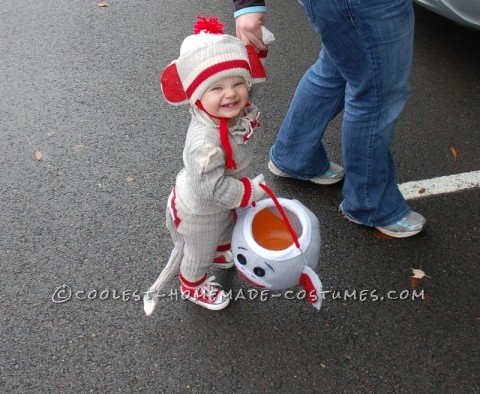 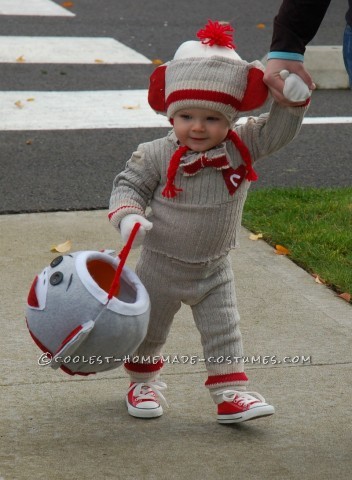 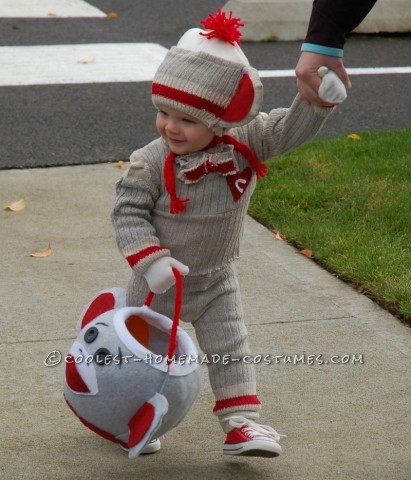 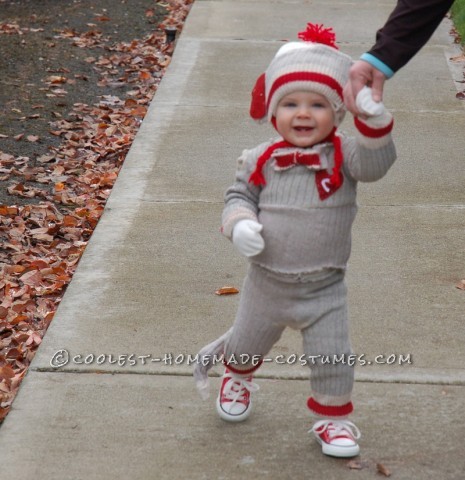 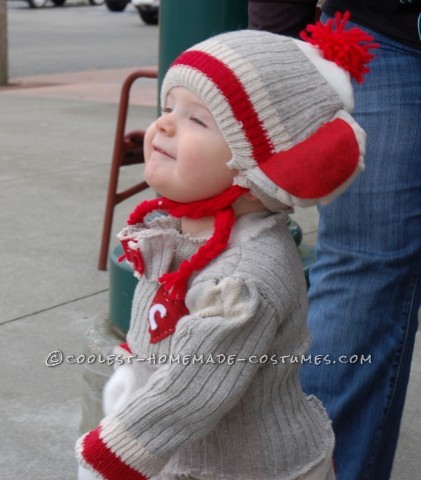 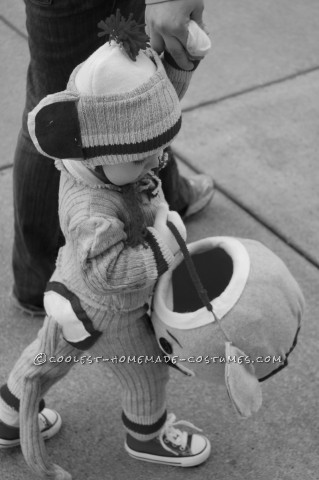