My son wanted to be a Sock Monkey for Halloween this year. I looked at every Halloween store and everywhere online to try to find him a Sock monkey costume. I had no luck! I decided how hard would it be to make a Ohio State Buckeye Sock Monkey DIY Halloween Costume?

So he and I made a trip to the local thrift store. Still nothing that would do. I started knitting the hand ends and the legs and made a hat. I have only been knitting for about a year so I am not that good to knit the entire body. So we made another trip to the thrift store to try to find something that would match to make the body. We found a woman’s sweater dress that was all black and very big. I laid my son down on some newspaper and drew around his body to make a pattern for a one piece jumpsuit. I took the dress and sewed it up to fit my sons size. And I put a zipper in the back to get in an out I then sewed on the hands and leg pieces that I had knitted.

The Final project piece was trying to figure out how to make the perfect head. I examined his real sock monkey and came up with an idea. I went out and bought a roll of 1/2 inch foam. I took the foam and wrapped it around the circumference of his head. Next I cut ^ ^ ^ ^ all the way around the top and joined them together to make the head round on the top. I used spray adhesive to hold them together. The hardest part was making the snout, the mouth part. I tried many ways and this is how I ended up doing it. I cut a piece of oval foam about 12 inches long and 8 inches across and folded it in half and glued the long edges together to form the snout. I cut a hole in the head where the mouth should go and stuck in the snout piece and glued in place. Finally, it was almost time to cut out the eye holes and cover the head. I measured the head on my son and marked his eyes and cut them out. I took the left over material I had from cutting out the sweater dress. I wrapped the head with the left over scrap piece. I cut a piece big enough for the head and about a 1 inch seam. I sewed the material and put it over the foam. For the top I just made a gather stitch. I took the hat piece that I had knitted and put it on the head to hide the gather stitch on the top. Now it was time to cover the snout. I had to knit a piece to cover the snout like a hat but not gathered on the top. I covered that over the snout and glued on with the adhesive. The inside of the mouth is a piece of the dress. The two buttons on the nose were from the dress also. The eyes started out being just plain cut out O’s from felt but I then decided to make it more Ohio State and to cut out block O’s. The red netting on the inside of the eyes is from and old nighty that had ruffle like netting on it. I needed something to put in the eyes that he could see out of. I thought I was finished and realized it had no ears. I knitted two more hats the same size. I cut out an oval about the spread of my hand from thumb the pinky from the foam and cut it in half for the ears. I covered the ears and cut a slit on each side of the head and inserted the ears and glued them in place.

To make it an Ohio State Sock Monkey I cut out another block O out of red felt and I had an old Ohio State sweatshirt that I cut the stitch lettering off of and glued it on the front of the outfit. I used spray glue adhesive for the gluing of everything that I glued on this costume. Spray adhesive dries fast and stays stuck forever.

This costume took me about a week to knit all the needed items and put it all together. 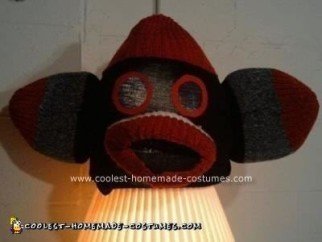 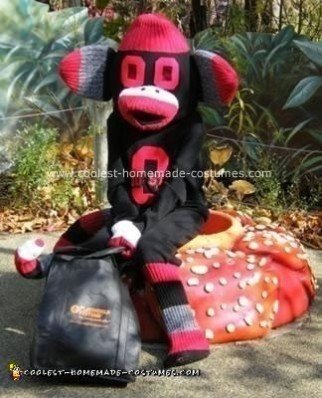