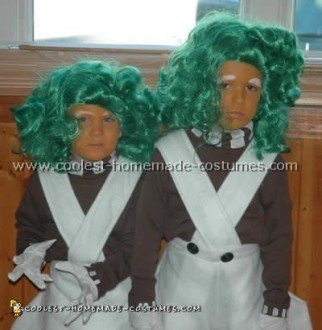 This idea came from my two boys ages three and five. They watch the original Oompa Loompa movie everyday and have it memorized. They kept on telling me that they were going to be Oompa Loompa costumes for Halloween. So there I was on a mission to find this costume.

I found a woman on eBay that I sent measurements of the boys to make the actual white jumpsuit and suspenders. I then found the green wigs on line, as well I got brown turtlenecks from Old Navy and painted the white stripes on them. Then, I found white tights and got brown fabric paint and painted stripes on them as well.

For the shoes I had brown shoes and I had bought Bunny Tails from a bunny costume and swirled the brown fabric on them and clipped them onto their shoes with safety pins. Then the final thing was painting their face orange with white eyebrows. The people in our neighborhood were hysterical. People would stop in their cars while we were trick and treating and sing the Oompa Loompa song. We carried a radio as well playing the song.

Their Oompa Loompa costumes were so cute, I don’t know how I will top this next year!

I had the idea for Oompa Loompa costumes a few years back already. I actually had made the costume a year before the new Charlie and the Chocolate Factory came out.

For the socks, I took a pair of red ones and then added white stripes with the use of white medical tape. I used an old pair of brown shoes I had. I picked up a pair of white sweat pants from a thrift store.

To make the suspenders I had taken a white belt and cut it in half and finished off the buttons with black fabric. Then picked up a red turtle neck from Wal-Mart and again added the stripes with medical tape. I bought a pair of white mittens, a wig from a thrift store with a can of green hair spray paint. I used costume make-up for my face. 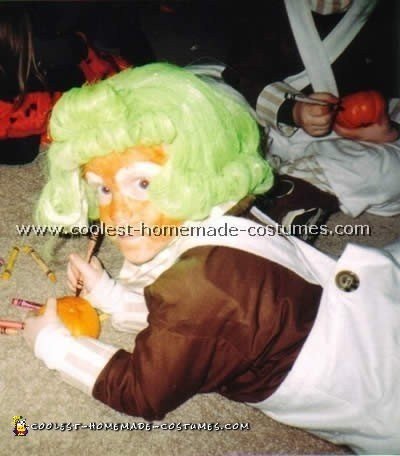 I made these Oompa Loompa costumes for my children back in 2001. I didn’t have a pattern to follow so I just “winged” it. It was basically trial and error but they turned out great. It took about two months to make both costumes and it cost about $40 for each costume. For the wigs I bought two long blonde wigs. I colored them with spray-on temporary hair color. Then I used a hot glue gun to hold the style in place.

The outfits were pretty difficult since I didn’t have a pattern to follow. I basically cut the pieces and pinned them together and had the kids try them on to make sure they fit. If they didn’t fit I made adjustments and had them try them on again. They got pretty tired of it since they were only three and four years old at the time. 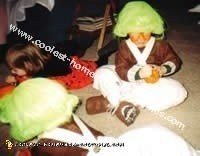 They got a lot of attention while they were trick-or-treating. People would stop us every couple of minutes wanting to take pictures. The kids were very shy at the time and they didn’t like all the attention they were getting so our trick-or-treating was cut short because they wanted to go home.

But the Oompa Loompa costumes turned out wonderful and we still talk about that Halloween. I still have the costumes and will probably never get rid of them.

Heading to the Chocolate Factory 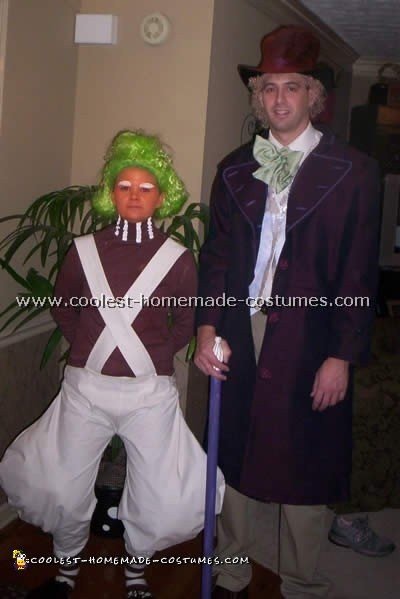 The costume for Willy Wonka I used a pattern for the coat and bought cheap clearance fabric that has a lot of stiffness. The shirt was sequins glue onto a shirt and the neck tie is a piece of shiny fabric. The hat is a black top hat painted with spray paint and the stick is a dowel rod painted with a finial on the top. The top hat has doll hair glue inside of it.

Oompa Loompa costumes have no pattern, you take white fabric fold it and draw out the legs and butt really wide then sew all the way around leaving holes for the legs and waist. Make suspenders with matching white fabric and pin them in place.

The shirt is a dye turtle neck with painted sleeves. The socks are store bought and the shoes are white socks with brown pom poms. Paint yourself green and get a green wig and you are set. 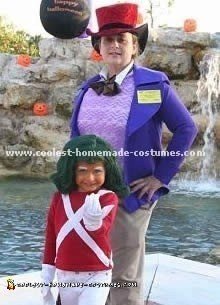 Last year my daughter had a dress up at school where they had to come dressed up as their favorite character from a book. So we went in Oompa Loompa costumes, Willie Wonka and Oompa Loompa. She even gave everyone in her class a Willies Wonks chocolate bar. It was so much fun. And we used clothes from around the house. The most expensive part was the wig. I took one of the blond bouffant wigs and spray painted it green. 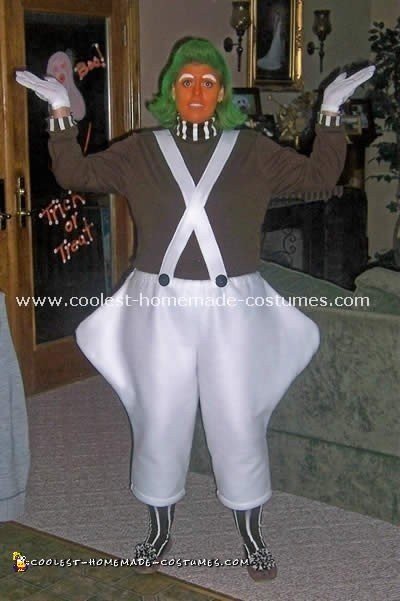 A friend at work made the pants for me; she is an expert on Oompa Loompa costumes so also helped me with the make up. She painted my face orange with white brows and the shirt is a brown turtle neck with white tape on the neck and arms for the strips. I sprayed my hair with green temporary paint and stripped the socks with white paint. My mom made the puff balls on the shoes out of yarn. Everyone seemed to love it. 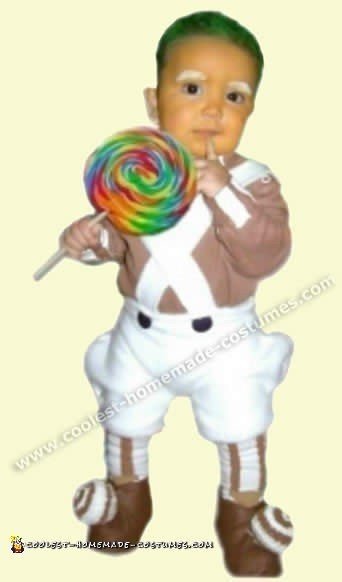 Our little man started walking at 9 months and by 11 months he was a pro. He looked funny walking because he was so small and so we decided he would become an Oompa Loompa. I didnâ€™t like the new Oompa Loompa costumes, so I went old school.

This was my first time making a costume ever, so pretty much anyone could do it. To make the costume I bought a white turtle neck, white tights, white fleece fabric, white yarn, elastic cord, brown felt, white fabric paint, 2 brown craft paint, small sponge brush, orange face paint, and green color spray for the hair all at Walmart for about $10.00 (maybe a little more w/tax). It took about an hour or 1hr and a half to make.

For the white turtleneck I used brown craft paint called Apple Barrel Colors (2fl. oz for $.20) The color was Chocolate, I think. I poured the whole bottle into a big bowel added a bit of water and threw the turtleneck into it (you could just buy dye, but this was cheaper). I let it set for about 15min. and just like shampoo, rinse, wash, repeat till you get the color you like. When the turtleneck dries (dryer) the next step is to make the white stripes with the white fabric paint (Polymark dimensional fabric paint 1fl. oz $1.50) on the turtleneck area and on the sleeves.

For the overalls I used fleece fabric (1/2 a yard for $2.00). I drew a pattern onto the fabric (almost like shorts but with half a circle on the side). After cutting that out, I then made another one for the backside. I sewed together and for the waist I sewed on the elastic band ($1.00) to have little bit of give. Next I cut out two strips for the crisscross overall and added the buttons.

As for the tights ($2.00), I inserted cardstock paper rolled up on each side (looks like little legs) so paint won’t leak through and also easy to paint on. I used a small squared sponge brush ($.30) to paint the brown stripes [the same color brown craft paint Apple Barrel Colors (2fl. oz for $.44)].

I made shoe covers with brown felt (4 pieces for $.20 each); just measure your kid’s shoes sideways and outline it 1 inch away from the shoes, sew the pieces together and add the elastic at the bottom to keep in place under the shoe. As for the balls on top of the shoes, I used white yarn (.99). I made two balls and hot glued the end of them to the shoe covers. I also made swirls with the brown paint.

As for the face paint I used an orange Halloween paint tube ($.99) and the green Halloween hair spray (.99).

Everyone loved him! Just to let you know his costume sold for $50.00 on eBay if you can believe that!! (In case you want to make a small profit out of your Oompa Loompa costumes). 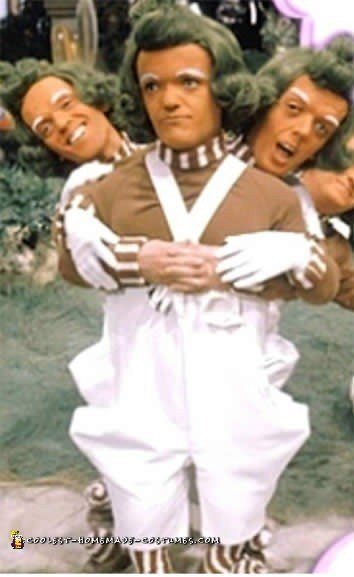