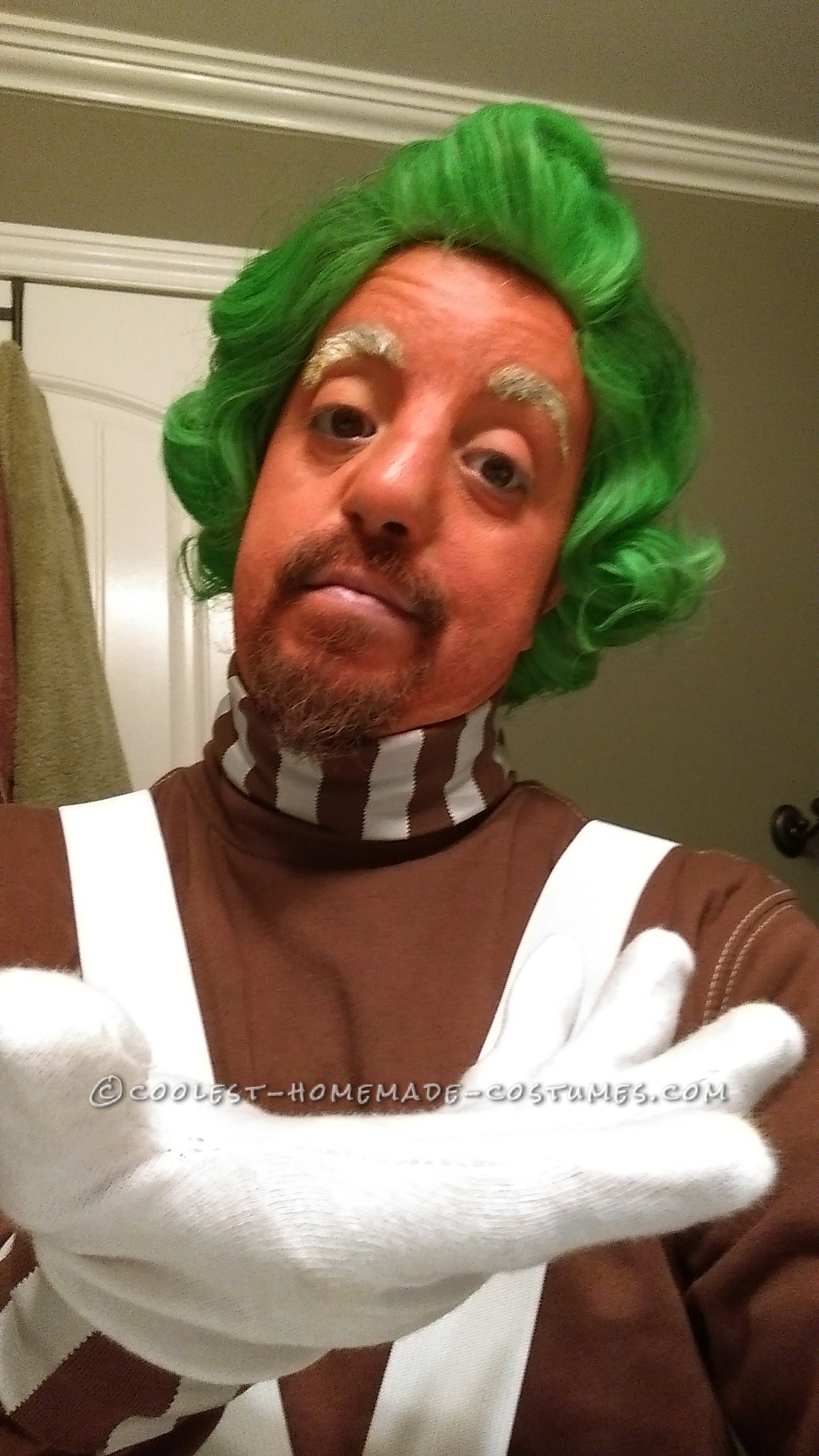 To begin with, as the title suggests, I am the least crafty guy there is. I checked many websites, including this one, and took ideas from all over the internet to make this costume. Clearly, I’m a researching type of guy. I actually learned a lot from making this costume and it really was a great experience.

Before I go into the making of the costume, let me go into some background. For starters, I’m 5’1. Yeah, that’s pretty short, but I fully own my shortness and love it. An Oompa Loompa costume was inevitable!

So This all started about 10 years ago. A friend of mine asked, “If I get you an Oompa Loompa costume for Halloween, would you wear it?”. I said “Absolutely!”. He set off to find the Oompa Loompa costume but came back a few days later empty handed. There went that idea, and while I didn’t think of it much, his great idea and the fun I could have it stayed in the back of my mind. Cut to 10 years later, September 2014. I was trying to figure out what to be for Halloween. It had to be something really good. At this point, that idea from 10 years ago popped in my head and I knew I HAD to do it this year.

So I was pretty excited, I went around telling EVERYONE that I was going to be an Oompa Loompa for Halloween this year. The idea was that I was going to have the costume professionally made because if I was going to do this thing I was going to it right and it had to be on point. At this point I should mention that in addition to not being a crafty person, another trait of mine is procrastination. Yeah. So, all of September and half of October rolled by when the thought occurred to me, “I should probably get on this costume thing right about now.”

I called several tailors only to find out that there was no way this was going to happen this year. What was I going to do? I already told everyone I was doing this thing. Make it myself? Why not? Surely I can find striped socks and white short overalls with buttons and a green wig. No, not so much. That’s not how it worked out at all!

I couldn’t find anything for this costume already made, nothing! So began the process of making this thing. I pulled up pictures on YouTube and started searching websites and I started to think, “this isnt bad, I can do this…”, with help from my sister and my mom, since they can sew and such things. Here’s how the costume broke down:

#1 White scrubs: I wanted pants with no zipper and a clean front, so after searching three different stores I finally found a pair one size too big, perfect. I just cut a hole in the waist to fit the buttons, very simple

#2 Suspenders: I didn’t want regular white suspenders because it would have looked different with them not crossing and there being metal on them. So I went to a craft store and found elastic bands that I guess are used  for underwear waist bands. They had to be the perfect width, 1/2 inch. I buttoned one side and had to put them on and measure how much to cut off so I could use them to keep the pants at the right height.

#3 buttons: I found these at the craft store had to be big but not too big and the right shade of brown.

*With the buttons and bands, I assumed my sister would sew them on for me. She didn’t have time, desperate times called for desperate measures. Now, I have never sewed anything in my entire life, and to be honest I was pretty scared to try. Thank God for YouTube! After searching YouTube, I found a very simple video on how to sew a button, so yes, I sewed on my very button on my own costume, this is the point I realized how into this I was getting. I have to say it was awesome thinking, I sewed on my own button and it looks darn good!

#4 Turtle neck: I looked everywhere for a brown turtleneck and could not find one anywhere, so I bought a white one and dyed it. Ive never dyed anything and wasn’t even sure how to do it so I did the easiest way on the package and filled the sink with hot water and let it sit. I used chocolate brown (get it? chocolate, Willy Wonka. I thought it was very appropriate, lol!) that was too light, so I dyed it again with dark brown and it came out the perfect color.

The hair: This was a Marilyn Monroe wig, because of course, I couldn’t find a oompa wig. With this, my sister said she would style it for me but she didn’t have time, so there I was trying to make this crazy thing look like an oompa. I played with that thing for hours, then I thought “why am I doing all this work when I have to color it!” so I clipped the top part back real quick and it looked like the poof on the front of the oompa, I thought, that figures, it looks right, now but I’m going to color it and its going to ruin it, Oh well, I’ll work with it.

What I did not realize was that that green hair spray I got was hair SPRAY so I sprayed it up and left it outside for a while and when I went to grab it, it was stiff as can be. It kept that perfect shape, total luck! It wasn’t green enough, though so I had get another can, I was in a hurry and got a different shade, darker. It turned out the perfect shade when combined, another total luck moment.

Brown knee highs: I bought three different pairs of knee highs and a pair of tights before I found the right ones. women’s ones, lol. I got some interesting looks walking the sock and tight aisle at Walmart comparing colors and sizes, it was fun.

The “puffs”on the shoes: These were Styrofoam balls that I drew brown lines on with a sharpie. The cool thing about these was that I attached them to my shoes with tied up wire, so when I walked around, it bobbled, adding to the look!

The reaction: My family loved it. My Dad didn’t know what an Oompa Loompa was, I had to show him, It cracked him up! I could not have anticipated the reaction I got from this costume. I went to the store and got thumbs up and had people saying “great costume!” When I got to the party, Everybody LOVED it. People I didn’t know wanted to take their picture with me.

The winner of the costume contest came up to me and said you got this, you are the winner. The best part was that everyone thought I bought it, when I told them I put it together, that reaction was even better. This was so satisfying and enjoyable from conception to finish. My only regret is that I did not put it on sooner so I could have more fun with it! 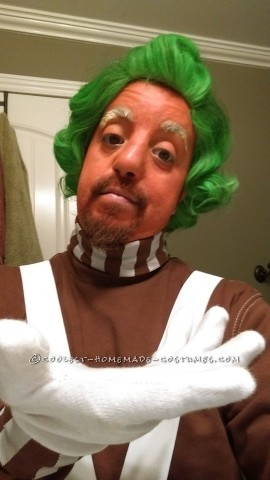