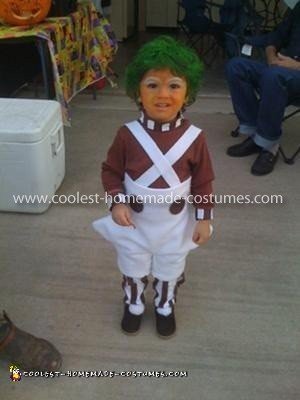 I wanted an original costume that I couldn’t buy from any costume store and that I wouldn’t expect to see on the street. After a lot of thought I decided to make my 2 year old an OOMPA LOOMPA!!! I need to add, never in my life have I made any type of costume, clothing etc. I can barely sew on a button -no joke..

For this Homemade Oompa Loompa Child Costume I printed a picture of the original Willy Wonka oompa loompa and the shopping began. Basically the majority of the costume came from the fabric/hobby store. I bought the cheepest fleese material I could find both white and brown. I bought needles and thread, fabric glue, some poster paper, brown fabric dye, some pom pom balls and some snap buttons. I also went to Carters to find a brown turtle neck and some white or brown leggings..

To begin I measured my son and drew what I hoped would turn out to be overalls. I chose white fleece because the material was cheap and stiff so I did not need to stuff the sides. I then cut out my drawing placed on the fabric and cut a few inches larger than the drawing just incase my measurements were off. I cut two of the same thing then sewed them together- easy enough except it was all by hand. I cut 2 long strips for the white straps and cut 4 circles out to imitate buttons. I sewed all of it together,added the snaps for the overalls and glued the “buttons” on..

Next, I took the white leggings (that is all I could find) and cut brown fleece material into strips and glued them on the leggings to immitate the stripes. I only found a white turtle neck so I followed directions on the .99 box of Rit dark brown material dye, dyed and dried it.

My son had brown boots so I just opted to add a white pom pom ball to each shoe using 1 stitch. I cut a strip of material and alternated color patches for the collar around the neck. The same was done for the sleeves. A few other things-not shown in this picture is a white material bag that I bought black iron on letters for and ironed on the word “sugar” -that was his trick or treating bag.

Lastly I bought cheap orange facepaint and a white makeup stick-total about $3.00. I also bought 1 can of green hair spray paint $3 (and I used the whole can in his-drk brwn hair).

The costume is great, totally original. Probably a little costlier than if you buy one premade however, it is priceless to me. Total cost was about $50.00 and part of that was due to my trials and errors..

I would do it all over again in a heartbeat! 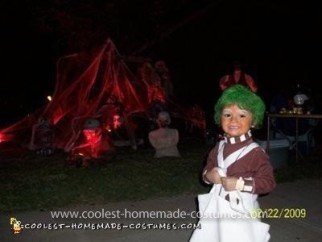 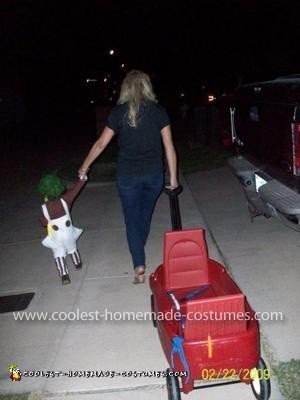 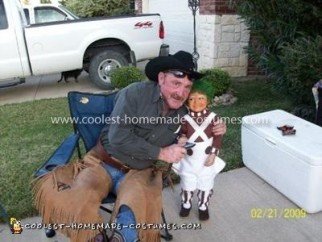