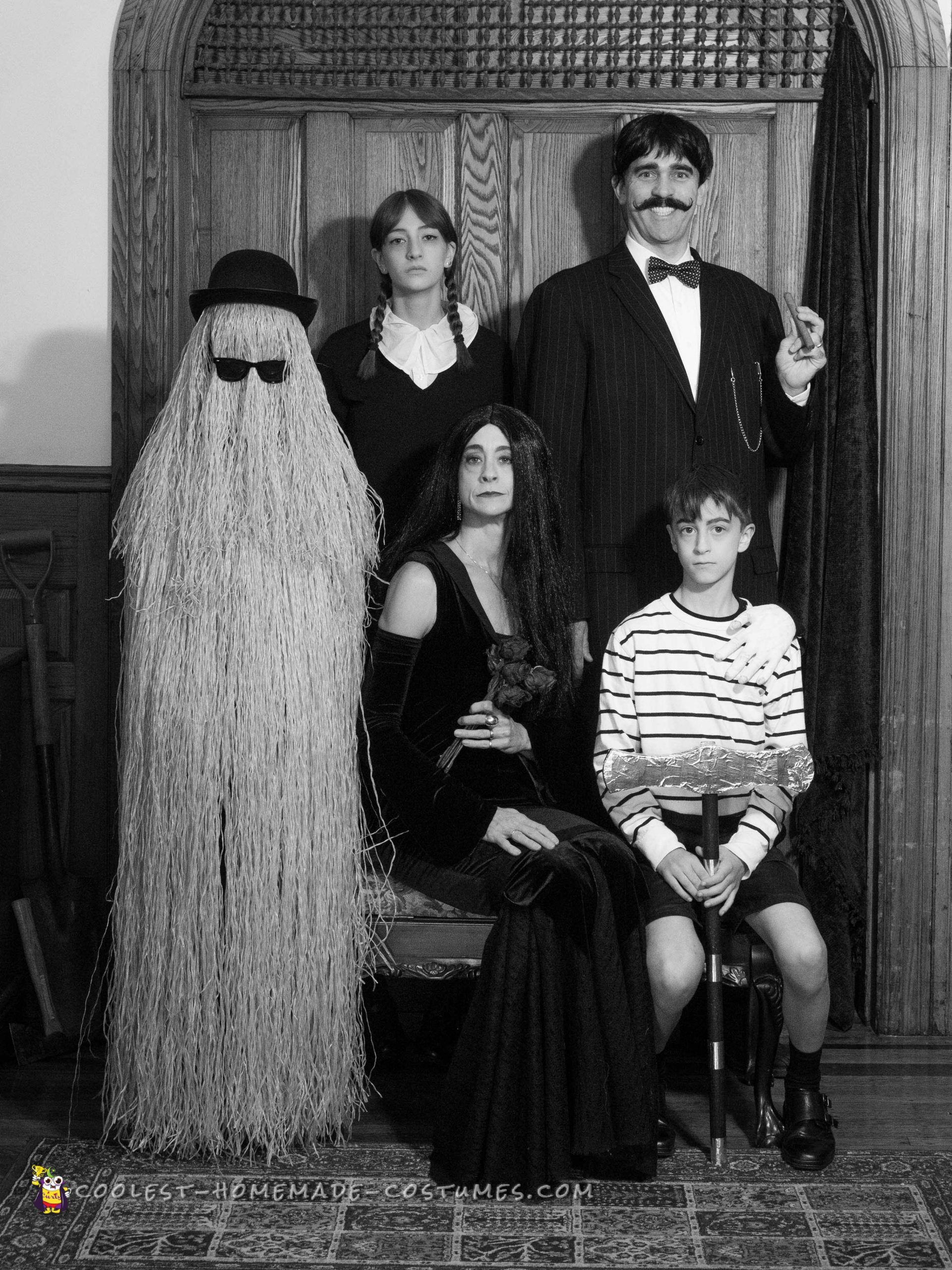 I, along with my husband and three children love dressing up for Halloween and here are our Addams Family costumes.  It’s a family tradition! This year we decided to go with a classic, and chose the quirky, creepy, lovable Addams Family! Presenting… Morticia, Gomez, Pugsley (guest starring The Thing) and Wednesday Addams, along with the ever-so-adorable CousinItt!  On Halloween, we literally stopped traffic when we walked out of our front door.  Cars were honking and pulling over to take our pictures on our way to our local Halloween festivities.  Our neighborhood has an annual Halloween parade and really goes all in!  We enjoy sharing our costumes with the community every year.  No local costume competitions, just good old fashioned dress-up fun!

Aside from Gomez and Morticia’s wigs, and Cousin Itt’s bowler hat, all other items were either from thrift stores, re-purposed, OR were  from dollar stores or deep discount stores. Total spent for the costumes (wigs and black hairspray too) combined was around $65. Gomez’s suit was the single greatest cost which came in at $22 from Goodwill.

Cousin Itt’s costume took the most time to create. 700 ft. of polypropylene twine from The Dollar Tree was unraveled to get the effect of hair. The hair was made in two tiers.  The top section was affixed to a stocking cap from The Dollar Store which hid underneath the bowler hat (see photo), and the lower tier was attached around my son’s shoulders with a safety pin. Both sections used the technique of looping a double length of the twine around a strong cord (think latch hook technique). After experimenting with a couple different method this ended up being MUCH easier than sewing or gluing on individual lengths of hair.

Pugsley’s clothes came from thrift stores. I cut off and sewed a pair of dress pants to make Pugsley’s knickers. My son decorated his own wooden axe with silver tape from the dollar store. The Thing was made by stuffing doubled-together latex gloves with cotton balls (to keep it light!). Magic marker was used to draw hand-like features. To hide the end of the glove, the hem from the cut-off pants was used to make a cuff for the hand.  Glue was used to affix an extra piece of material into the end the end of the glove before it was carefully sewn to Pugsley’s costume. This prevented the latex glove from ripping. (see photo).

Gomez’s suit came from Goodwill. The mustache is real! My husband cut off his full beard and left the mustache for the night.  He darkened it with mascara, which worked worked very well to give it form and shaping ability.

Morticia’s dress was repurposed from an earlier Halloween and had previously been purchased at a thrift store. I wore it backwards and opened up the seam to create the neck-line plunge. The sleeves were removed from the dress and worn upside down for a dramatic effect. Also, the width of the lower part of the dress was drastically tapered by sewing, then a circle of black lace fabric was added that trailed onto the floor, again for more drama.

Wednesday’s dress was found on a clearance rack at Forman Mills for $1!  Wednesday’s shirt came straight out of my closet and thankfully fit my daughter.

Our Addams Family costumes were well received and t was another year of great Halloween adventures, made even better by our amazing neighborhood in Philadelphia!