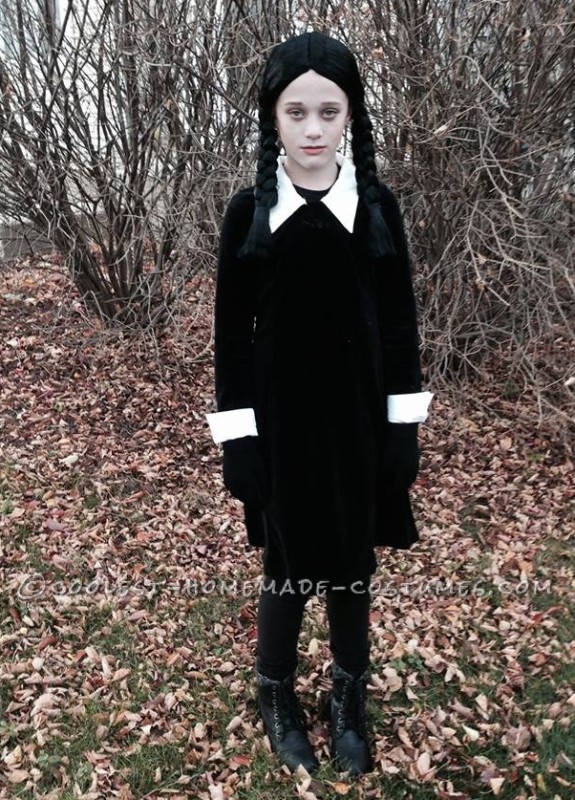 The Addams Family black and white TV show came out before I was born. The  Addams Family movie and the sequel, Addams Family Values, came out before my daughter was born, who is now 10 years old. However, once she saw the movies on TV she became a fan of the dark, morbid daughter of Morticia and Gomez and she wanted to dress up in a Wednesday Addams costume this Halloween.

So, I set about researching Wednesday’s look (as per the movie character played by Christina Ricci). I found a plain, black velvet dress on eBay, I found two white shirts at a thrift store – one I used for the large white collar, and one I used for the white cuffs on the sleeve which were then sewn on to the dress. I found a black braided wig, and black leggings (it was a freezing cold Halloween so we added black gloves and black under armor shirt and pants.) She also wore black combat-style ankle boots.

The makeup was what made the costume work but it was the trickiest. My daughter is fair and has freckles. Wednesday Addams has pale translucent looking skin that looks like it never sees the light of day. So getting the freckles covered to achieve a smooth yet natural look pale look required some trial and error with cosmetics. I tried white face paint but it was too clownish looking. Trying to find pale white concealer and foundation seems easy until you realize it is still too pink and “fleshy” looking. I had two practice sessions before I finally landed on the right combination of makeup. I found a lavender colored concealer in a small container by NYX at Ulta, which I used to dab on her freckles. I also found a liquid concealer in a tube by NYX in a grayish tone. I used that as the all-over face makeup and rubbed it into her face and neck. I followed with a very pale translucent pressed powder by NYC to set it. I then used some grey eye shadow below her cheekbones for some contouring. I darkened her brows and shadowed her eyes using the NAKED palette by Urban Decay – using mostly browns and purples just under her eyes and the inner corners of her eyes. I applied some mascara on her top lashes. For her lips I used MAC lip liner in “Spice” and used a MAC lipstick in “twig”.

For her trick-or-treat bag we used a plain white pillow case and cut the top off to look more ragged. We wrote with a black permanent marker, “I’m not perky.”, “Touch my candy and you will pay the consequences”, “I hate everything”, “Be afraid”, “Property of Wednesday Addams”.

My daughter totally got into the part! She normally is a very smiley, happy girl but the minute she had this costume on, she became “Wednesday Addams”. The reaction was amazing! I would say not all kids knew who she was (but a few did). Adults told her that was the best costume they had seen and so unexpected! 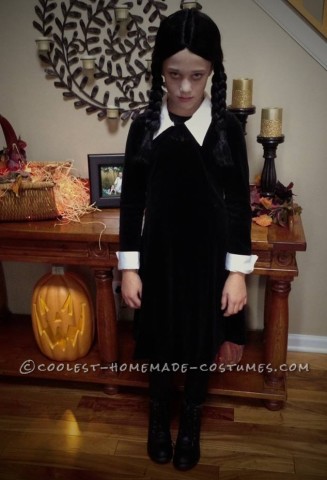 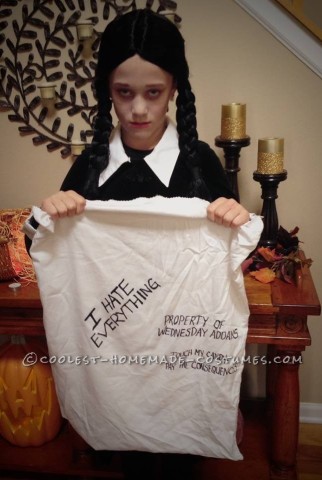 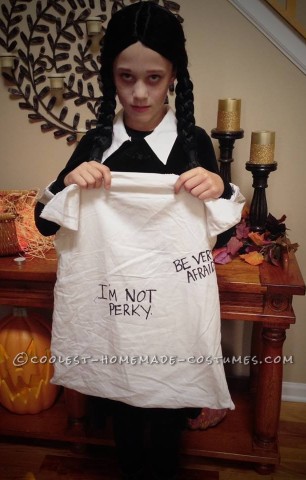 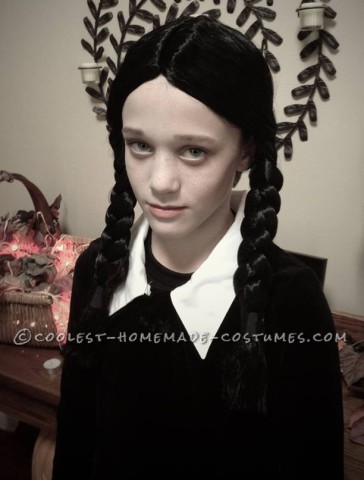 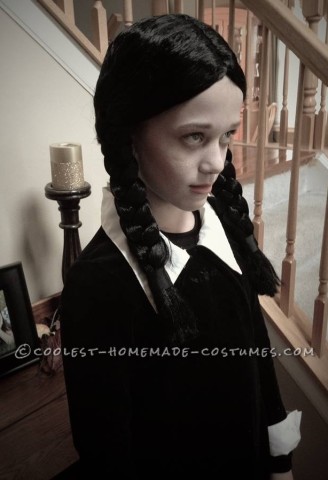