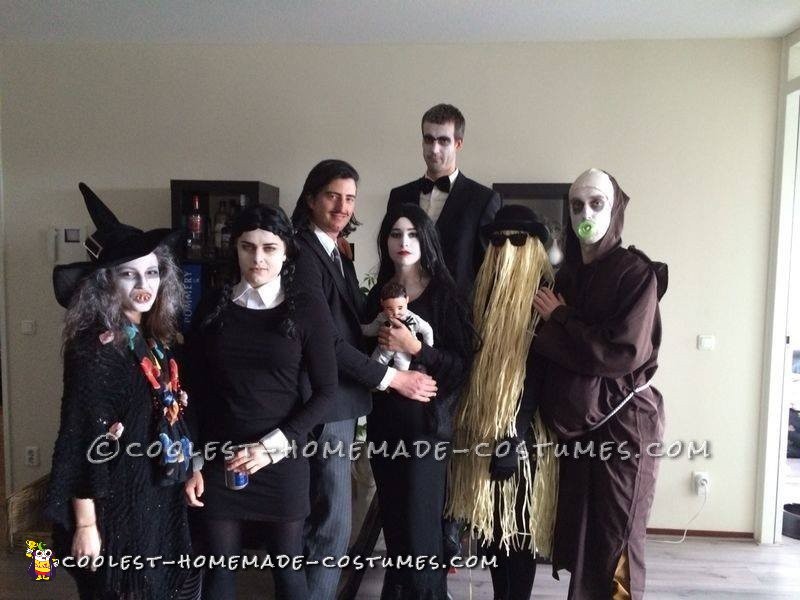 Carnival in the  south of Holland, 2014. After the previous year with an excellent result of the Simpons Family costume, the expectations of my participating friends were high. This year I went for The Addams Family. Quite a risk as it is not as well-known in the Netherlands as it is in the USA, I guess.

Best thing about the Addams Family is that it doesn’t matter that much with how many group members you are as a group. It will be okay with five, but eight or nine members is possible too. We had seven.

Start with white schmink, grey/black eye make-shadow and a black eye-pencil. You will need it for almost all the characters.

Morticia needs black long wig. I already had a long black dress and with spider rag furniture I made it a Morticia dress. I made it at the bottom of the dress, nice and tied. It was quite hard to walk but perfect for Morticia. I also put it on the shoulders to have beautiful long sleeves.

Aubert: I bought a puppet/baby on a flee market and painted it’s hairs black and of course a mustache like his dad. With a little bit of furniture I made a little body suit with a big spider on it.

For Gomez I bought a secondhand suit with a spider-tie. The hair of my friend was blond so we painted it black and drew a mustache of course. I bought a plastic hand toy and prepared it on the shoulder of the jacket. The Thing was born.

For cousin Fester we used brown furniture to make his dress. Tied it together with a rope and under it a pillow for a bigger body. We use a bald hair mask and I painted a lamp/light with glow in the dark paint. (to put in his mouth)

Wednesday was made with a black wig where we braid ponytails in it. We bought a simple black dress and made of an old blouse the with collard and wristbands. Like a college girl dress. Black polished shoes and a fake rat and ready.

Cousin Itt was made of two straw skirts (Hawaii skirts). This with an English bowler hat, black glasses and under it all black, gloves, ties, shirt etc and Cousin Itt was born.

Lurch: We bought a second hand suit again and the maquillage was very important. We also had a duster.

Grandma: We painted the hair of my friend gray, both fake witch teeth and a witch had and used an old ugly plaid as a dress/ clothing.

We only missed Puglsey, luckly we found some ‘prison-like’ figures at the festival which we adopted as the lost family member. ;) 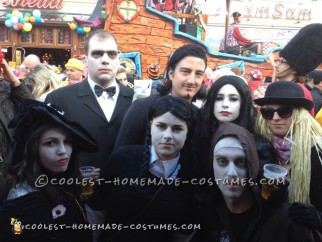 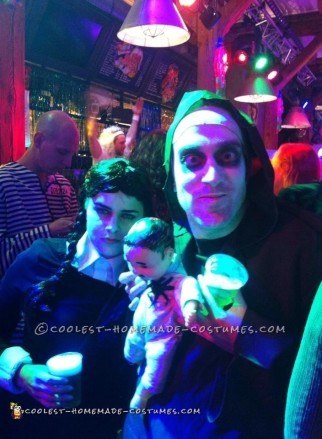