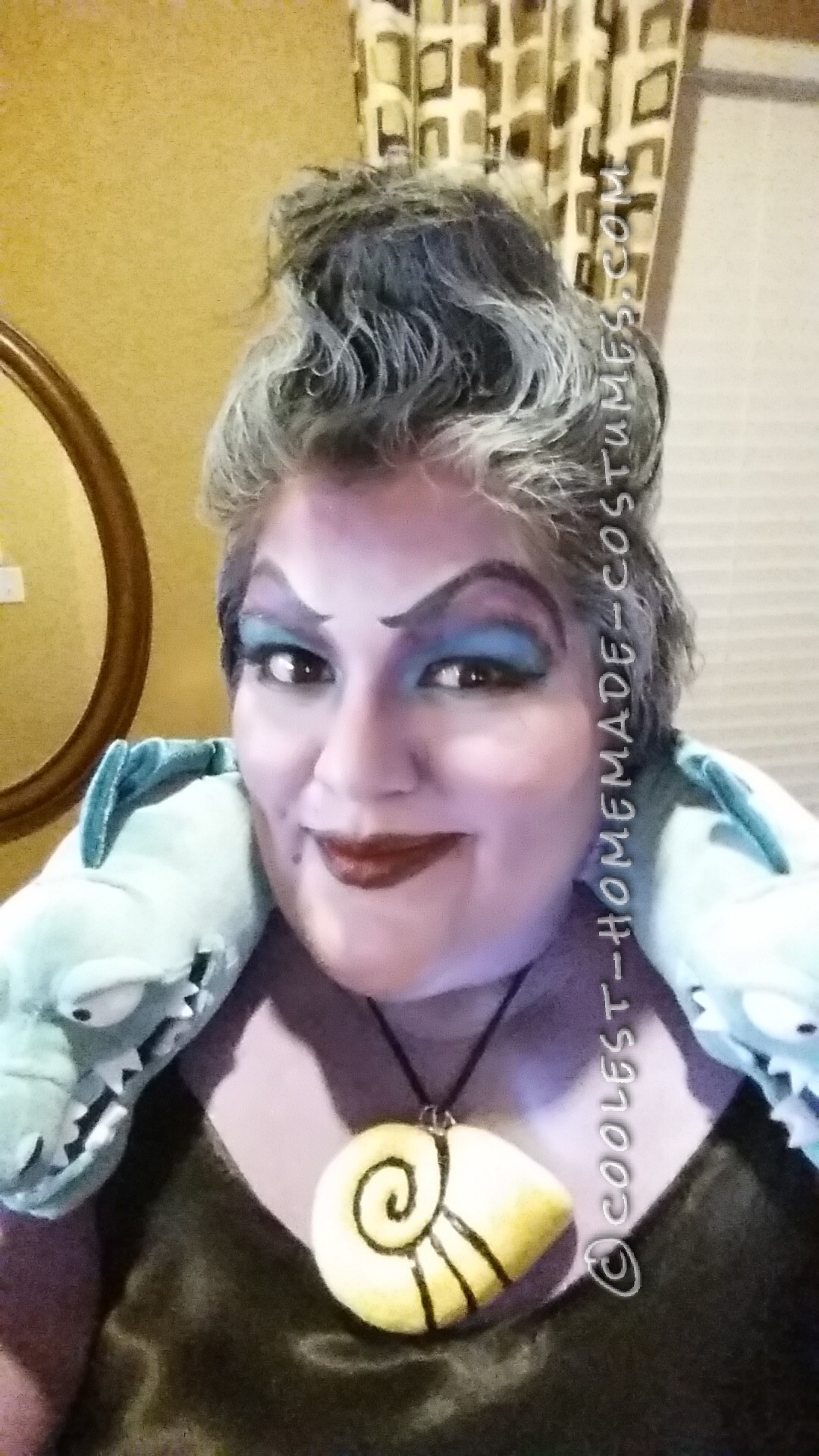 For the past few years, I’ve wanted to be Ursula for Halloween. I looked online, but to my dismay, every “plus size” Ursula costume I found was barely that, running a size 14-16, which is about a 1x. I found that hilarious since she is one of, if not the largest Disney villain, and stores and shops had her costume in smaller sizes, most of them not even full length.

So I set about making my own. I knew how I wanted it to look, covering my legs and appearing as though the tentacles were floating. I thought about attaching the tentacles to bracelets on my arms to move them as I walked, but found that was difficult and would get in the way once I was passing out candy to trick-or-treaters. I did a LOT of research online for tutu and makeup tutorials, and how to sew the tentacles, etc. It took About a year, with planning, and buying materials, finding what I already had and how I could use that.

I had only kicked the idea around, when the inspiration came from a friend’s garage sale. I found two of her old high school formal dresses and “Pretty In Pinked” them by restyling it into a new dress. One was black, one was purple. I used the black satin lining from the first one, I had to seam rip the entire sheer overlay, and the black finish reminded me slick octopus tentacles, so I had to use it as the main dress! The purple dress was an entirely different material, but it also had a satin lining, which was this iridescent purple, it had different shades of purple when the light hit it a certain way, so I cut that lining out in section to use as the underside of the tentacles. I had to buy some extra black satin material for the top parts of the tentacles, but not too much.

I measured six tentacles, I thought Ursula had eight, but looking at the pics, she has six. After trying to sew them on two different machines (one wouldn’t catch the stitch, the other kept snagging the material) I had to HAND STITCH all six of them, which was time consuming! That was the hardest part, after which, I used dark purple felt and hot glued them for the suckers. As per the suggestion of my friend’s seven yr old daughter, I added glow in the dark rings to each of the suckers using tulip puffy paint I bought; she said it would make them stand out and she was right! Ha ha, I bought a sturdy leather belt with rows of holes punched in to use as a harness to hold the tentacles. I stuffed each one with cotton  and polyblend batting (I advise using cotton, polyblend adds volume, but doesn’t hold the shape as well, keeps shifting) and then ran a simple coat hanger through each one. I got wire hangers (thanks dry cleaners!) and straightened them with pliers and wire cutters, bending a loop on each end.

Looking back, I would have used more than one hanger to give more movement and angles, but one seemed to hold the weight well. After each hanger was stuffed along each tentacle, I used the top loop to bend and secure inside the holes of the belt, and the other loop at the tips, I threaded with fishing line. Bending each tentacle upward to make a loop, I tied the fishing line to the top hanger loop on the belt to secure it. I then ran duct tape on both sides of the belt to secure it and to prevent any poking of hangers or chafing through the night.

The tutu was made with elastic and LOTS of tulle, I wanted volume and length. I used three different colors- purple, black and lavender, and about 150 yards of each. I found a tutorial on how to measure and tie them, and that went on over a pair of leggings I wore, with the tentacle belt on top. The eels, I wanted to be exact, with Flotsam on the right and Jetsam on the left, and I didn’t want to mess up on making them, so they were bought online. I attached them by sewing their tails together to go around my neck and added Velcro strips to the dress straps to hold them in place. The Velcro kept coming off because of my makeup, so I advise to hot glue, or sew the Velcro to the dress straps. I didn’t want to pay for the light up necklace or earrings online, so I made them. Paid two bucks for a packet of turritella shells, they often already have holes on the sides already, so I painted them over with purple nail polish, and hot glued some earring hooks I had from another pair.

The necklace is made from yellow sculpey clay, I rolled it and made sure the end was hollowed a bit. I had a necklace fastener and ran a string of cord I had through it. I found these light up balloons at Walmart, about four bucks for the pack, cut them open, and they had those small LED lights inside each one, so I hot glued those puppies on the back and inside the shell. I also used the aforementioned glow in the dark puffy paint to glaze over the front of the shell after baking it to make it stand out.

The makeup was mostly Mehron brand, two different purple shades of powder. Started with lavender creme foundation first, large sponge application recommended for bigger areas like arms, for even coat. Purple powder over that, and then lots of translucent setting powder over that. I had Urban Decay eye primer and their eye shadow palette (great stuff!) but I’m sure any aquas and purples would work. Makeup tutorials online on how to contour and blend, I wish I could have covered my eyebrows better, maybe next year. :) Nails were fake, press-ons with bright red polish. My hair was short already, so I teased the life out of it and used Got 2 B Glued hairspray and novelty store white hair spray paint in layers over that (about three small cans for this do).

I had one of the best nights ever in this costume! The plan was to wear it for early evening to pass out candy to the trick-or-treaters, and then later, head out downtown with my younger sister and some friends to hit the bars and clubs.

The second little boy who came to my door, told his mom “look mom, she’s a monster!” And I was like “Yes it’s working!” I got a lot of little princesses asking me to take pics and telling me I was their favorite, or that Little Mermaid was their favorite movie. I was milking it, telling kids I was going to “steal their voices” with my necklace. Kids asking if they could grab my tentacles, parents and kids loved it and I got a lot of requests for pics, and to sing “Poor, Unfortunate Souls”, which of course, I did. I got two kids who cried and were scared and a mom who told I had the best costume of the night!

After trick-or-treating was over in the neighborhood, I had some time to touch up my makeup, which surprisingly, was not a lot. None on my face, that stayed in place the whole night, but my arms smeared on the dress a little, but that was a quick cleanup and touch up. My sister, friends and I went downtown to a popular strip of gay clubs, and it was SO crowded, but great fun! I made the joke that maybe people would think I was a drag queen, and sure enough, I got asked several times if I was a guy or girl in my costume, which I took as a high compliment, because really, who does better makeup? We got there too late for me to enter any contests, but I kept getting told I would have won. I was the belle of the ball, because I kept getting stopped and asked to take pictures, to do different poses, and to sing again!

I think Ursula gets a bad rep, people love her sassiness! Ha ha, I also saw two other guys dressed as Ursula, one in a purple miniskirt who high-fived me and told me to “Keep it going, sister!” The other was dresses as The male version of Ursula, and he is in one of the pics I posted here, turns out I knew him and used to work with him! Small world! I barely had to pay for any drinks, because I kept getting drinks bought for me, Miss Popular over here. :) Had I known the huge response, I would have dressed as Ursula much sooner. Even on the way home, we stopped at a diner to eat, and the staff loved the costume as well. I took pics with some of them, and they kept calling me Ursula, as in “more coffee, Ursula?” “Your order is coming up, Ursula!”

All in all, it was a great night, I had a blast! I wanted to say, to all the kids who called me Ursula when The Little Mermaid came out and I was a chubby 11 yr old, THANK YOU! You were absolutely right, you poor, unfortunate souls, and you helped me to have a fabulous Halloween! :) 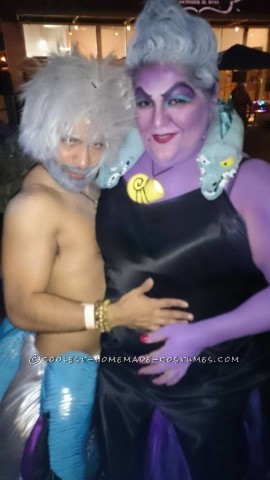 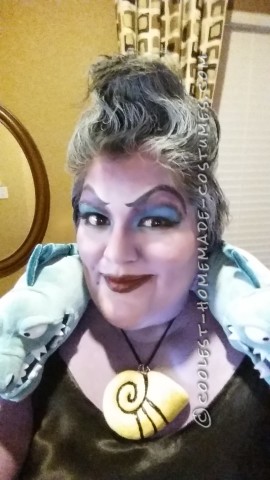 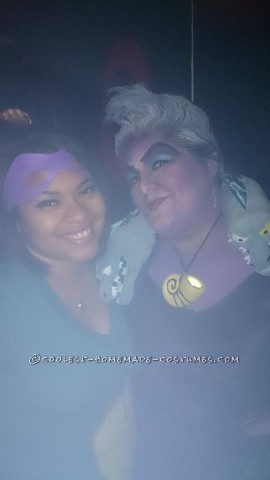