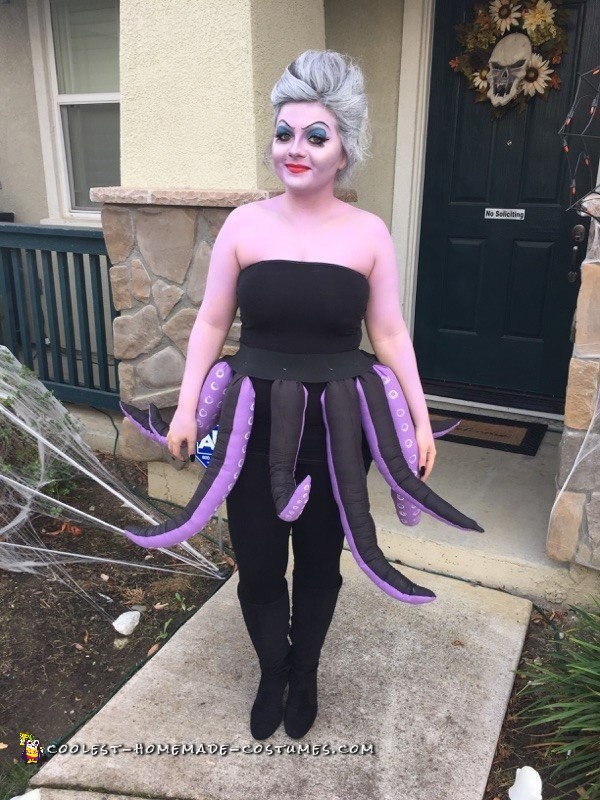 A group of friends decided to be Disney villains this year. I have to say – over the years I’ve worn my fair share of store bought “cute” costumes, but as I get older, the “cute” phase is over. I no longer want to be something cute on Halloween – I now aim for creative and accurate – none of those leg avenue attempts at a costume. With that said – here is how my homemade Ursula costume came about.

We actually went on a group trip to Disneyland. While walking around the park seeing all the Disney Princesses, we realized the Villains don’t get much love. So we all picked a villain. I knew I wanted something extreme so I went with Ursula so that I could paint my whole body.

(These ready-made Ursula costumes are a great inspiration for more ideas.)

So the prep work began. I googled “Ursula Costume” to get some ideas and I saw some pretty sorry store bought costumes. Then I saw some geniuses who made tentacles out of everyday items. Like pool noodles, attached them to the bottom of their dresses, and tied a string at their waist to bring them upwards. I contemplated this idea but I knew I would be taking an hour car ride to my Halloween party and this might not be the most comfortable. So I started to think – is there a way to bring the tentacles up further so that they don’t get in the way while I walk.

I knew it would take some time to come up with a plan so I moved on to the challenge of painting myself purple. First, I searched the web for best face and body paints and in the end I went with Mehron products. I got some clown white paint and some purple water activated paint and hoped they would blend well to make a good purple. Then I ordered a large inexpensive pallet of bright eye shadows. I figured it would come in handy for costumes in the years to come. I bought a black strapless dress and some white hair spray and called it a day.

So after all of my items arrived in the mail (I am sure UPS and FedEx loved me, they were making deliveries every day in the week leading up to the Halloween party) I got to planning. I decided to attempt to sew my own tentacles by hand and attach them to an “empire waist” belt that I had sitting around. Rather than wearing the dress I opted to just wear leggings and an old black tube top for maximum comfort.

Believe it or not I made my entire homemade Ursula costume the Friday night before the party. After work I went to my local fabric store and purchased 1 yard of inexpensive black fabric, 1 yard of inexpensive purple fabric, some white puff paint, 4 yards of elastic, and 2 20oz bags of fiber fill (only ended up using 1 full bag). I cut out 8 strips of black fabric (4 strips were ~18inches long and the other 4 were ~24inches long for variety) I cut them wide at the base and thinned them out at the tip, rounding out the tip. Then, I did the same with the purple fabric.

Sewing Machine to the Rescue

After cutting up the fabric I remembered that I had purchased a $20 mini sewing machine a few years back. So I dug that out and it was a life saver! I was prepared to pull an all-nighter but it only took about 3 hours. After YouTubing how to thread the sew&sew mini sewing machine (that should tell you how much experience I had with a sewing machine) I was all set! So, I took one black strip of fabric, and a matching purple strip. I lined them up as close as I could and sewed one half shut.

Then, I opened it up and sewed elastic on the inside side of the black fabric. I figured this would help them curve. I found that the more I stretched the elastic the more it would curl. So I varied the amount of “stretch” on all of the tentacles. After the elastic was sewn on I stretched the fabric back out to match up and sewed the other half shut leaving the opening at the wide base of the tentacle. I flipped them inside out after sewing, stuffed them with fiber fill and, ta da! tentacles!! after they were stuffed I sewed them shut to prevent the stuffing from falling out. Once that was all done I took the white fabric paint and drew circles on two rows on all the tentacles and set them out to dry overnight.

I had originally planned on sewing them directly on to my belt but the belt was too thick to fit in my tiny sewing machine. So I safety pinned them avoiding the back of the belt so I didn’t have to sit on them.

This was the fun part! The party started at 6pm and I knew I would have to be out of the house by 5pm. So I started early. I did my hair first. I just teased the heck out of it, hair sprayed it before and after teasing and used about 500 bobby pins to pin it all up. Then I went outside and sprayed it white. It only took about 20 minutes. So I relaxed for a while with my Ursula hair, sent some snap chats out to friends for a sneak peek, and started my makeup at about 3pm.

I took a plastic spoon and scooped up two big spoonfuls of white paint. Then I took the purple “starblend” paint and placed it under the sink to soften it up. I scooped up about 1 spoonful and mixed them together. The clown paint was no joke! It was very creamy and thick. I used a foundation brush to paint it on my face. Then took my damp beauty blender and started to blend it on my face. I was really happy with the consistency and color. So I kept painting it on my neck and chest and blending it out.

In addition, I did all of this in small patches. Because the paint would dry up a bit and be hard to blend If I let it sit for too long. I also had some loose translucent powder lying around that I used to set the paint. It was a little tacky because it was so creamy so the powder helped with that. It never fully dried though, I had to be careful not to rub up against people or things all night.

After I was all purple I took a white pencil and sketched out my eyebrows and exaggerated eyelids. I glued my eyebrows down to help conceal them and took some liquid liner to draw on my brows. Then I went on to the eye shadow – just lots of blues and blacks for a 3d shading effect. I took those same blue and black shadows and contoured my cheekbones a little bit to give my face a shape. Also, I contoured my collar bone and chin to round it out like Ursula’s. I over lined my lips, painted on my beauty mark, and applied some false upper and lower lashes to complete my homemade Ursula costume look.

Voila, I was a Disney Villain!