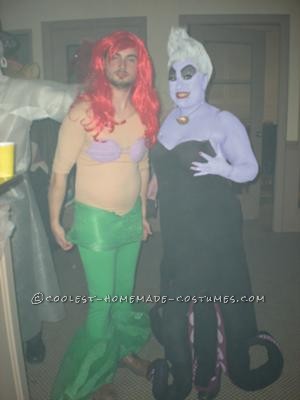 I had been wanting for years to dress as Ursula, as I have always loved the character, and the drag queen Divine which she was modeled after. So when my fiance agreed to be Ariel, I finally had the motivation to do all the work and made these Ursula and Ariel costumes. I love the sale bins at fabric store for Halloween, so it was the first place I hit for black jersey (Ursula’s octopus skin always came off as very matte to me, as well as for comfort factor) and some cheap purple polyester. I also picked up some green jersey and green sparkly Halloween fabric.

These costumes were completely custom made. For Ursula, I made myself a pattern for a sweetheart tube dress that flared out into four wide triangles (tentacles). Four slightly smaller purple triangles attached to the reverse of the black jersey, this way the black would fold over the under side of the tentacles for a more realistic look. I then sewed wire around the edges of all the tentacles so they could mold into any shape I wanted.

I used Dollar store acrylic to paint the suction cups onto the purple part of the triangles. I tried to stay really true to the colors of the original animation. I then stuffed the tentacles, careful not to over stuff to avoid that funny pillow-look that can easily happen. So that’s 4 tentacles, but Ursula has six! (I was careful to count, her arms, make the octopus 8).
So out of the same jersey, I made myself some extra long tentacle-shaped “leggings” with the same purple triangle backs. About 10 inches from the tip of the tentacles, I cut a shoe-sized hole, that fit snuggly around the soles of my black shoes. I then sewed the same wire into the 10 (or so) inches of tentacle extending out of the toe of my shoe, so they could curl back.
Now my original intention was to stitch the top of the dress onto my strapless bustier, but because I was going to go dancing and partying, I just stitched it onto a purple bra for comfort and security. Like Ursula, I am bustily gifted.

Now came the hard part. I have long brown hair, down to my butt. Also, I HATE WIGS! They are itchy, uncomfortable, and always LOOK like wigs. And I was very dedicated to Ursula, and her short, floating in the water hair was a challenge accepted. Enter my best friend, florist foam (previously used in my Dora costume). I carved it out into a small swirly triangle, almost turd shaped. Taking my que from extreme punk hairstyles I concocted a mixture of hair gel, egg whites, and white glue. I slathered this bit by bit into my hair as I lifted and molded it over the foam. My hair was long enough to go up one side and over the other. Bobby pins were used here and there, and breaks were taken to hair dry the style into place. An hour and a bit later, I had short hair! Standard Halloween white hair colour spray, and I was becoming the sea witch!

This is where I splurged. Because I was so dedicated, I called around to all the costume shops looking for heavy duty latex body paint. I ended up having to go the a specialty, umm, leather shop to find it. I mixed purple and white to get the right shade, and slathered it on, chest and arms up. I found the biggest, thickest fake eyelashes I could, and cut them at an angle. As I said, Ursula was inspired by the Drag Queen Divine, and so I used some drag queen techniques (gluesticks and coverup) to disappear my eyebrows. Regular make up in exciting colours to create Ursula’s look, complete with beauty mole.

For her necklace and earrings, I found real sea shells the right size and shapes. I painted the necklace shell gold with acrylic paint, drilled a hole and laced through some black ribbon . I painted the earring shells purple (using the same paint I used for the tentacles suction cups). More drill holes, wire and earring hooks. Some cherry red nails, and some chest shimmys, and I WAS Ursula the Sea Witch!

For Ariel, I made some green leggings that had a sparkly green skirt attached that could be pulled up and down for dancing comfort. I constructed big sparkly fins out of the same skirt fabric, and lots of tool. These were attached to the bottom of the leggings, to flare out like fins, and fit right over the shoe.

I paper mached Ariel’s shell bra. I painted them, and some elastic purple (same purple as Ursula’s suction cups). The big splurge for Ariel’s costume was the wig (there was no make shifting her hair out of my fiance’s). We also bought a nude colored body suit so that he wouldn’t get cold, but the costume could have easily gone without. A little red lipstick and a thick fluffy beard, and he was the most graceful little mermaid.

This costume was a lot of fun to make, and wear. Totally worth all the hard work! It will be tough to top! 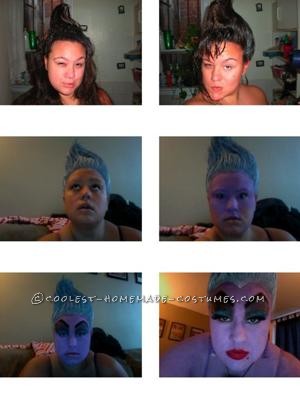 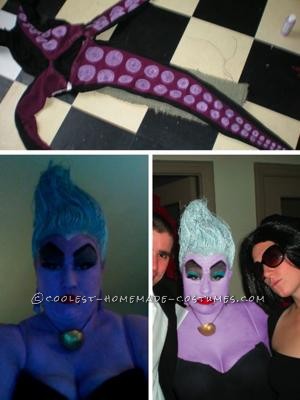 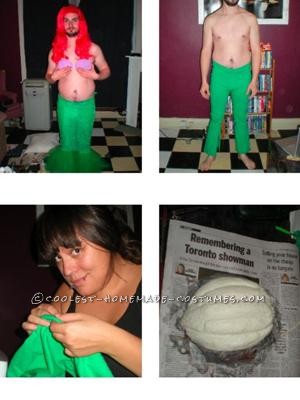