I bought the blue dress and shoes at Gabriel Brothers. The red ribbon I used to make the suspenders and belt was something we had lying around along with the fur that lines the bottom of the skirt. I purchased boning to make the skirt stick out a bit from a fabric store. The felt used to make the stars and the rainbow on the dress. The ribbon in my hair was from Wal-Mart. My earrings and ring came from Claire’s. The knee highs and armbands came from a previous costume.

I had the idea for Rainbow Brite costume because it was one of my favorite cartoons when I was little. I don’t have any sewing skills so I knew I was going to have to depend on what I find at the thrift shops. I found a cheerleader skirt and a blue t-shirt at one, the rainbow sweater suspenders and red belt at another and finally the boots and a fur scarf for the trim at another.

All in all I went to about six stores in two days (I didn’t find something at every store). I then went to a craft store and purchased craft foam to make the rainbow belt buckle. I took me less than an hour to hot glue everything together. I ended up winning “best female costume” for the party I attended. The boots were a rare find that I can’t expect everyone to come across so I would suggest finding some old snow boots and getting craft foam and gluing the rainbow stripes on there. 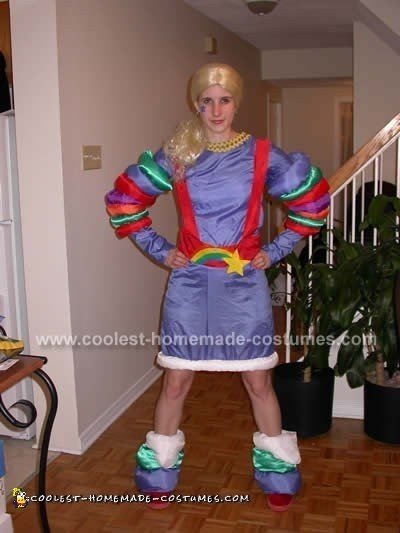 This is Rainbow Brite. I loved this cartoon as a kid and had wanted to create a costume for some time. This costume actually took a few years since I have no sewing experience and after I broke the sewing machine had to do the rest by hand and glue gun. I had to make a sleeve of each color for the arms and legs, then stuff each one to give it the puffy style just like Rainbow Brite.

I couldn’t find red shoes to fit the costume so I had to dye them red. In the end it was all worth it. 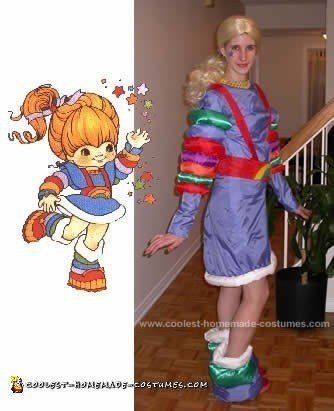