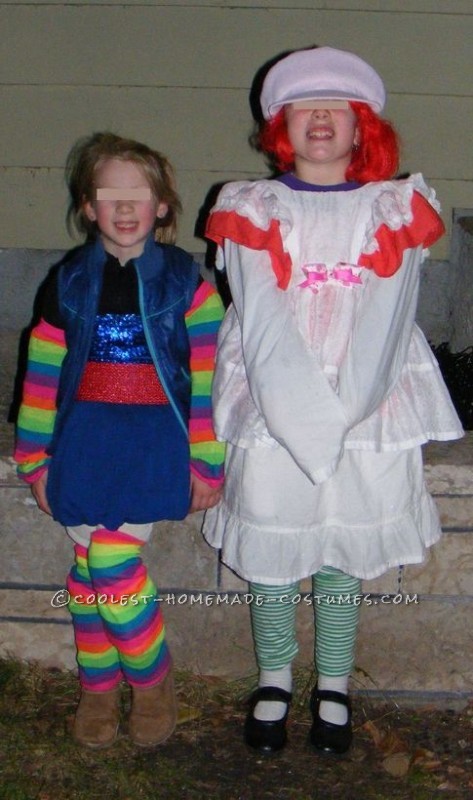 My two girls were my childhood dolls for Halloween last year. They both already knew who Strawberry Shortcake was, but I had to go online and show them who Rainbow Brite was. Once they saw her, there was no question as to whom they would be for Halloween.

About a month ahead of Halloween I started collecting ideas in my head as to what I would need to make these Strawberry Shortcake and Rainbow Brite Kids Costumes work. Then, I set out to our local Value Village…it was an AMAZINGLY successful trip!

I bought the clothing pieces large enough to go over warmer clothing, as it’s chilly here for Halloween, but we had a relatively mild one last year so sweatshirts, leggings/tights were enough.

The picture was taken at the end of the trick-or-treating fun so they were both pretty frazzled already (note the lopsided red wig), but everyone who saw them, knew who they were!  They had a great night!

The white peasant blouse went on first, then the red blouse, then the white skirt (with the blouses tucked in) and finally the pinafore apron (the barrette was taken apart and the bow was pinned to the pinafore).

She wore white knee-highs and then I cut the sleeves from the green and white striped t-shirt and tacked them to the tops of the socks (inside). Then she put on the Mary-Janes. My daughter has loooong dark blonde hair that I made into a bun and topped with the red bob wig. This helped to hold on the hat.

You cannot see it here, but the hat has white strawberry seeds hand-stitched onto it and a fun-foam stem was tacked on top. Some roll-on Pink Glitter Gel for the rosy cheek glow.

The party dress was brought in to fit around her tiny frame and the skirt of it was darted up around the tutu to make a balloon skirt. Belt attached around her waist (she was so tiny it went around her almost twice.) A fun foam star/rainbow applique was cut-out and attached to belt (the buckle was closed at the back.) The vest was popped on over the dress.

My daughter’s naturally golden blonde hair was pulled up in a high side ponytail. More roll-on Pink Glitter Gel for the sparkly rosy cheeks.