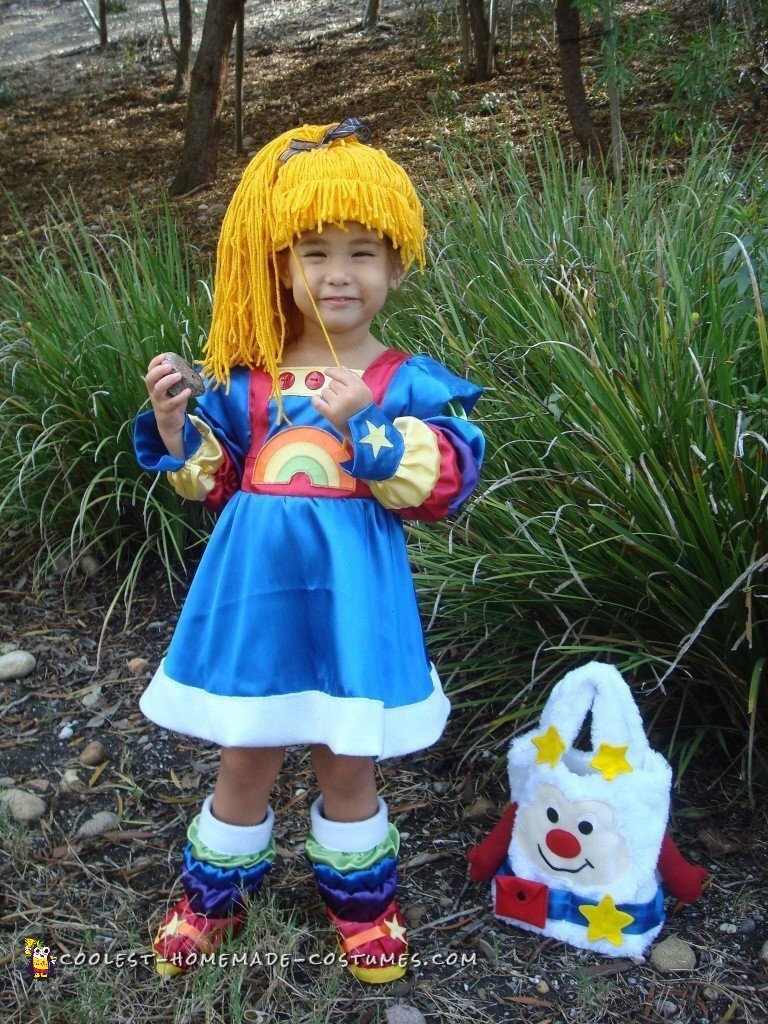 Growing up in the 80’s, Rainbow Brite was one of my favorite cartoon characters, but sadly I never got to dress up as her for Halloween.   This year I decided to relive my childhood memories by transforming my 3 year old daughter into Rainbow Brite for Halloween.

Because I work full time, I decided to start the costume two months early to avoid the last minute stress.  I didn’t include step by step instructions here, but I will try to share some tips that I learned along the way.

Armed with a picture of Rainbow Brite and her sprite Twink, I first headed to Joann’s and bought some costume satin and fleece to make the dress and boot covers.  Because my daughter has brown hair, I also purchased yellow yarn to make her a wig.  I later returned to Joann’s to purchase fake fur and felt to make a trick or treating bag to resemble Twink, her side kick.

I knew the dress was going to be a challenge because I didn’t want to spend $40-$50 on a vintage Rainbow Brite costume pattern.  Instead I used a dress pattern I already owned as a starting point.   I then drafted the red suspenders, belt and most importantly the puffed rings around the sleeves and added them to the bodice.

Constructing the puffed rings was one of my bigger challenges as I have never done anything like that before and wasn’t able to find any tutorials on line.  I live in a warm area so I decided it was going to be too hot to have the rings fully stuffed.  I’m glad I made that decision now because it was 85 degrees on Halloween!

To create the puffy look on the sleeves, I cut over-sized pieces of fabric and gathered them to create some volume.  I then sewed the gathered pieces to the inner sleeves.  The rainbow on her belt and yellow stars on her sleeves were then appliquéd onto the dress.  Lastly I added a basic circle skirt to the finished bodice and added white fleece trim to the bottom of the skirt.  I finished with 3 red buttons along the neckline.

I found a basic pattern for boot covers on line and used that as a starting point.  Once I figured out how to construct the puffed rings on the sleeves, I used the same method on the boot covers, which is also made from costume satin.  I also used white fleece for the fur trim.  Finally I added yellow ribbon along the bottom to make it look like soles of Rainbow Brite’s boots.

Making the wig was the part I dreaded the most!   It also gave me the most headaches.  I don’t know how to knit (and didn’t have the time to learn this go around) so I was going to ask a knitting friend to crochet a beanie cap for me so then I can just attach the yarn.  But then I decided that I shouldn’t drag her into my crazy crafting and costume making obsession.

I found online tutorials that used pantyhose as a starting point, after which the yarn is sewn on, to complete the wig.  I first tried that option but my daughter downright REFUSED to wear it complaining it was too tight!  Plus the pantyhose cap kept slipping off.  At this point, I was feeling a little defeated because Rainbow Brite is blond and I definitely wanted blond or yellow hair on my daughter to complete the look.

Onto version two…. This time I decided to sew a looser fitting beanie cap out of yellow fleece (that was the only semi stretchy fabric I was able to find in yellow).   I learned that picking a matching color for the under cap is very important as it allows less yarn to be used (bald spots are easily camouflaged), preventing the wig from becoming too heavy.

After sewing the cap, I attached the yellow yarn around the brim and pulled the yarn up into a pony tail.  Lastly I added elastic around the brim of the cap to cinch things up and to keep the wig from falling off.  Thankfully my daughter decided the second version was acceptable to wear.  And to my amazement, it stayed on the entire time, even with her skipping and running around!

At the last minute, I decided that Rainbow Brite could not be without her side kick, Twink the sprite.  Inspired by Pinterest, I decided to make my daughter a trick or treating bag to resemble Twink.  I used a fury material to construct a basic tote bag.  I then cut out pieces of felt to create Twink’s face and sewed it to the tote bag.  I also added a blue belt, red pouch, and yellow star around the middle of the tote bag.  I used leftover red fleece to construct arms and sewed them to the side of the bag.  Sewing the bag turned out to be the easiest and most enjoyable part for me.  If your character has a sidekick, but there isn’t another body to play that part, making a treat bag like this one is a quick and easy way to fill the side kick role.

I took her trick or treating twice, once at Sea World the week before, and then again on Halloween night and we received so many wonderful compliments.  None of the kids knew who she was but she was definitely a BIG hit with the parents my age and grandparents who have kids my age.  People kept telling her how cute she was and they also told me it was such a nice treat to see a completely different and unique costume.  Some even thanked me for bringing back some good old memories.  A few people also asked where I bought the costume and were completely amazed when I told them it was 100% handmade by me.  My daughter loves being complimented – the more compliments she got, the livelier she became.  By the end of both outings, she was dancing and skipping around, flaunting her costume.

Total cost of the homemade Rainbow Brite costume (dress, wig, boot covers, and trick or treating bag) was around $45 (I used a bunch of coupons to purchase the material).  I probably spent 6 weeks on and off sewing, sometimes late into the night but the reaction I got (from both my daughter and everyone else) was well worth the effort! 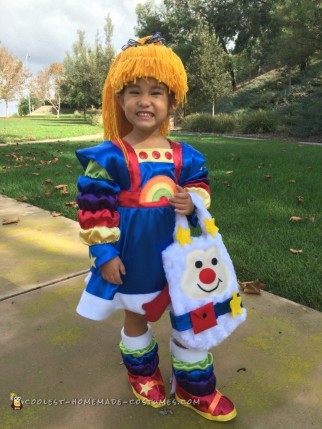 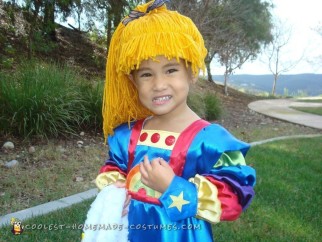 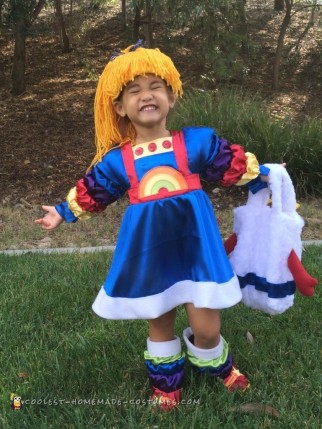 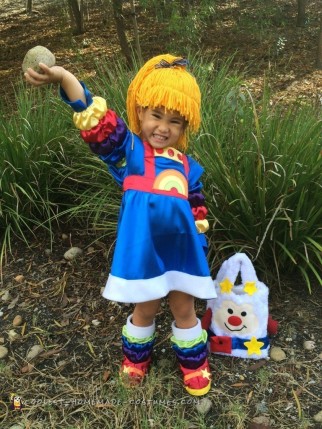