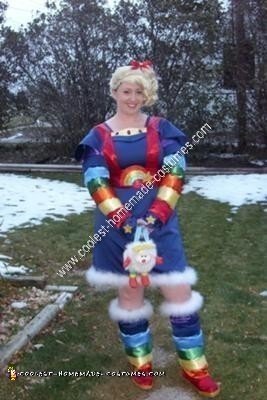 Rainbow Brite was my favorite cartoon when I was a kid, and I’ve wanted to make her my Halloween costume for several years. After searching for Rainbow Brite costumes and only finding blue minidresses with rainbow tights, I decided to make an authentic Homemade Rainbow Brite Halloween Costume this year! I looked over the costumes that were already posted on the Coolest Homemade Costumes website to get some ideas, and then got started.

I bought a long, strapless bridesmaid dress off eBay and shortened it to knee length. I used the extra blue material to make straps and to use in the arm & book covers. Then, I bought some satin fabric and sewed strips together in the spectrum of the rainbow. It was the first time I’d used a sewing machine since high school and I was concentrating so hard that I accidentally mixed up yellow and orange on the arm covers! Since I had limited sewing experience and didn’t know how to shape the arm covers, I took apart a long t-shirt sleeve and sewed the satin to it, then sewed it back together.

The process was similar for the boot covers except I traced the boot pattern onto spandex and then sewed them into boot covers. The “fur” trim on the bottom of the dress and top of the boots was a sparkly white maribou boa. The yellow stars on the arms and boots were made out of glitter foam, as was the rainbow on my midsection. The red belt and suspenders was made out of the same satin fabric as the arms and boots, and the yellow strip above the bust was satin as well. I glued red jewels onto the yellow satin. To make the purse, I bought a plush Twink doll and took the stuffing out. Then I sewed on the purse straps and Velcro to close the hole. I found an 80’s side ponytail wig online and attached a red ribbon to the hair.

For the finishing touch, a purple star was drawn on my left cheek with an eye pencil. I loved the final look and had so much fun wearing it out on Halloween! 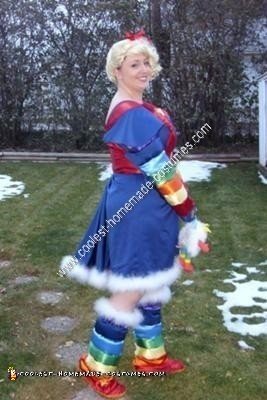 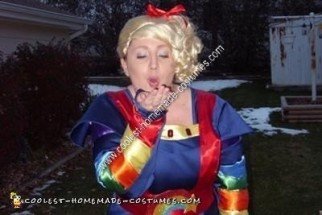 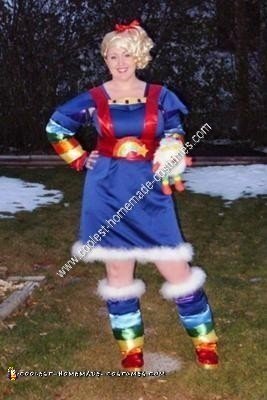