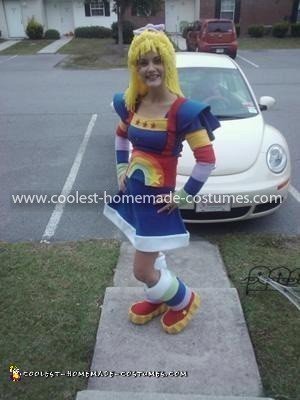 I debated a long time with what to be this year…and finally picked after my husband decided he was going to be Optimus Prime. I picked Rainbow Brite for 2 reasons 1: HELLO, it’s Rainbow Brite, how awesome is that!! and number 2: Cause I like to do the Couples costume thing with Adam, this year I thought guess its “Greatest 80’s cartoon characters”.

So to start my husband and I make our costumes every year, but normally we can use lots of things we buy from the store and just add on to it, but Rainbow Brite was made mostly from scratch!! We bought all the material at Walmart. Went home and started cutting and gluing, it’s truly amazing what a glue gun can do!

The dress was cut and glued to fit me exactly, the pieces were made separate: the top, the skirt and the Rainbow belt in the middle. It was all easier to get into that way. After having the top on and the skirt I wrapped the Rainbow belt around and that easily hid the separation from the top and skirt. The shoulder pieces were done by taking an old poster covering it in the fleece and gluing it to the rim of the top, that gave it the flared out look. The arms were made by gluing individual rolled and stuffed color bands to one long sleeve that I could pull off and on.

The boots are the only thing that we already had and just adjusted. We made rolled stuffed color band and glued those around the boots. My favorite was the bottom of the boots. Adam took cardboard and glued it to the rim of the boot, then took rolled up poster pieces and stuck them spaced out on the cardboard. Once all that was one he applied the yellow felt…and that gave in that bumped affect all around the boot! JUST AWESOME!

The hair!! my goodness did it take me forever to figure out what to do about the hair. Again I wanted her to stay and “cartoon-ish” as I could so buying a wig was out of the question. Finally I bought some plastic headbands from the Dollarstore and spent nights gluing yarn to it! I bought one for the top and one for the bottom of my hair, just to cover everything. Then I leaned over while Adam gathered it all into a pony tail, tied and we were DONE!. Simple as that!

I love that this is a great way for my family to spend time with eachother and I love this Homemade Rainbow Brite Costume! 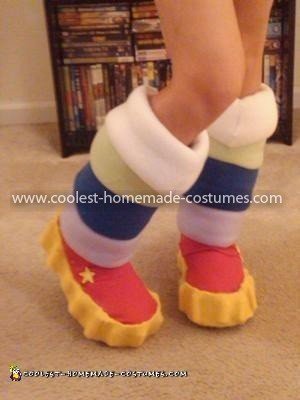 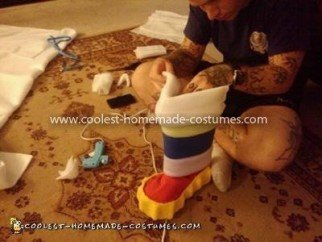 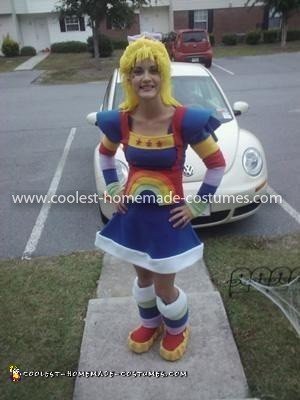