Rainbow Brite was one of the most amazing cartoon characters from the 80’s and my all time favorite. As a bigger girl I always have a problem of finding costumes or even clothes for that matter that fit well and make me look cute. So I decided that this year I was going to make my own and this Homemade Rainbow Brite Adult Halloween Costume turned out far better than I expected.

There was a lot of time put into this costume, the only thing not made from “scratch” was the shoes. I painted an old pair of skater shoes and they worked perfectly. The rings for the feet and the hands were all single rings, I tried them on multiple times and re-sized them. The rings are stuffed with pillow batting.

The skirt was the easiest part. It was supposed to be a poodle skirt, a friend had given me all the fabric pre-cut into panels for a poodle skirt, but for 2 years I did nothing with them so decided that they needed to be my Rainbow Brite skirt.

The two most difficult pieces were the corset top and the wig. I found a pattern online for a corset and thought that it would be the best choice for the costume because I wanted something form fitting for the shape. It is three layers, black inside, interfacing, and blue outside. The eyelets in the back took a bit of force to make them work, since they were going through 2 layers of each fabric.

The wig was my favorite and most frustrating item to make. It took so long but in the end I think that it was the best thing for the costume. I started with a band of elastic about the size of my head and tied long strands of yarn all the way around. Then I used an old baseball cap for the base of the wig and attached the elastic to the cap. Once it was on I adjusted the hair and made the ponytail on top. Then I used a crochet hook to attach more yarn to do the bangs. All in all I believe the wig took me about 8 hours on and off over the 2 weeks I made the costume.

I love this costume and I am thrilled to wear it out. It lasted through an afternoon Halloween party, downtown, as well as an 8 hour shift at work. My hope is that this costume will last for years to come because it makes me happy to just look at it. 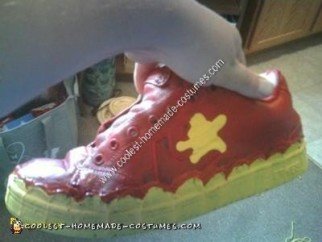 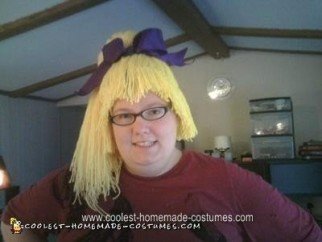 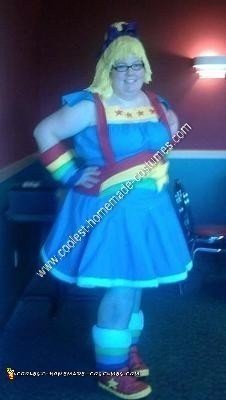