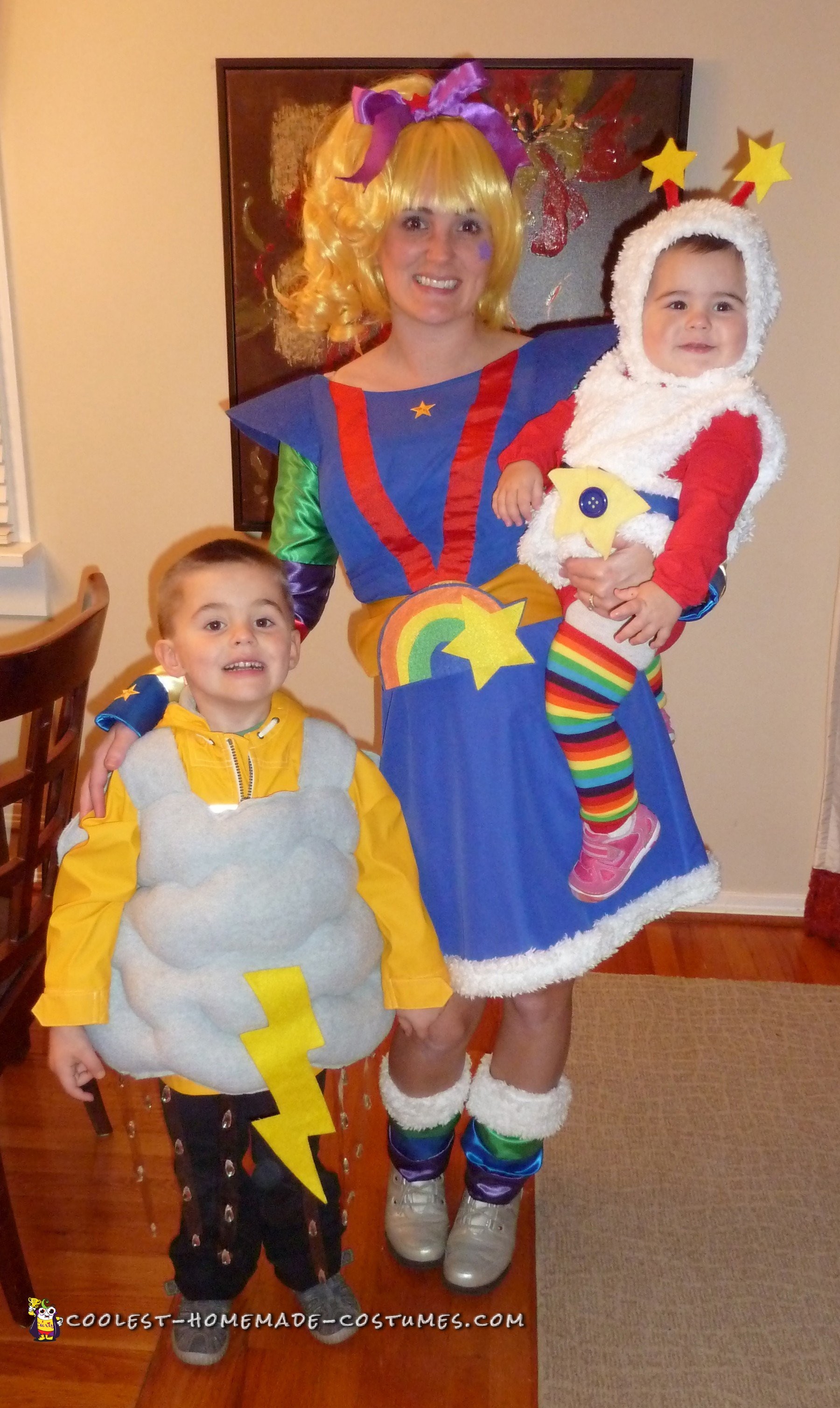 The inspiration for this idea came from a royal blue bridesmaid dress that I wore in my brother’s wedding. Instead of having it sit in my closet for eternity, I decided to upcycle it. I loved Rainbow Brite in the 1980s and knew the dress would be a good base for my costume. Once I decided to be Rainbow Brite, I thought it would be cute to make my daughter a Twink the Sprite costume since Twink is Rainbow’s loyal sidekick. I was discussing my idea with my husband and my 4-year-old son overheard me. He then said, “Mommy, maybe I can be a storm cloud because you need rain to make rainbows.” So glad that my little guy enjoys my love of a good theme. The rest is history!

For the Rainbow Brite costume, I cut off layers and pieces of the bridesmaid dress that weren’t necessary. I added fluffy trim at the hem, sewed red ribbons on the front, and made the shoulders point out with reinforced felt. Then, I used colored strips of satin and stitched them together to make a striped fabric for the sleeves. I made a template for the sleeve with excess fabric and made changes until it fit me. After a lot of trial and error, they were even and looked great.

Then, I decided to make striped covers for my winter boots. I used excess satin and white trim and I added a little Velcro to hold them onto my boots. For the final touches, I added a yellow ponytail wig with a large ribbon, some stars on my dress and cuffs, and a foam star sticker on my cheek.

For the Twink costume, I bought a pattern for a pumpkin. I’d never used a pattern before and panicked a bit when I started to realize how many symbols there were and the various pieces and size options.  I finally figured it out (sort of) and was able to cut the pieces I needed out of a fluffy white fabric. I stopped using the instructions, and figured out the rest on my own (sewing the pieces together, stitching Velcro to hold the shoulder straps together and adding an elastic band in the hem.) The hat was from another part of the pattern. It was supposed to be for a lamb, but I just didn’t add the ears.

For the finishing touches, I used a glue gun to put stars on pipe cleaners for her hat, used a blue ribbon for her belt, and made her belt buckle and little pouches out of felt. I added a large button and an extra piece of felt to the back so I could slide them onto her belt. I was lucky enough to find toddler sized rainbow leg warmers online and a red onesie for underneath (thanks to stores putting Christmas items out ridiculously early!) Finally, I had to figure out how to make a storm cloud. My son chose a nice light gray fleece at the fabric store. I cut out the shape of a cloud and sewed the edges together leaving an opening to stuff it. I then randomly sewed curved lines to give the pillow more dimension. I stuffed fiberfill stuffing into each crevice and sealed up the opening.

The stitches in the middle of the pillow added great texture and made it really look like a cloud. I made two of them and sewed them together with straps for his shoulders. I added Velcro under his arms to keep the pillows from flopping around. I used reinforced felt to make the lightning bolts. The raindrops were the part that really pushed the costume over the edge. I had what I thought was a fantastic idea. I strung teardrop beads onto fishing line and attached them to the bottom of the clouds. It looked awesome. I clearly underestimated the real thunderstorm that my 4-year-old was capable of though.

He ran around the house in it for no more than two minutes and every strand was twisted and wrapped around the others. It was a mess. I resolved the issue by cutting strips of clear vinyl (that was left over from covering  the cushion of one of our dining room chairs in order to protect it from the aforementioned busy child.) I sewed the beads onto the strips (about 3 inches apart) and attached the strips to the bottom of the clouds. They worked perfectly.They weren’t twisted or tangled and they held up throughout the night.

We had a lot of fun wearing them. So many people came up to us and asked about the costumes. Some people said that they loved Rainbow Brite and still have the doll and Twink stuffed animal. I had others asking if they could take pictures. There was a lot of positive feedback on social media. At one point, my son got overwhelmed by all of the attention and asked if he looked silly. I told him that his costume was different and that’s why people were interested in it. He recovered quickly and seemed to enjoy it after that.

It turns out that everything seemed to stick to the white fluffy fabric that I used. By the end of the night, the baby had collected a ton of grass, twigs, and leaves from falling when running across the lawns (she’s a relatively new walker and tends to roll when she falls over.) The cutest part though was when my son was shooting lightning and thunder at others with scary costumes. I had a number of late nights when completing them, but it was well worth the effort. 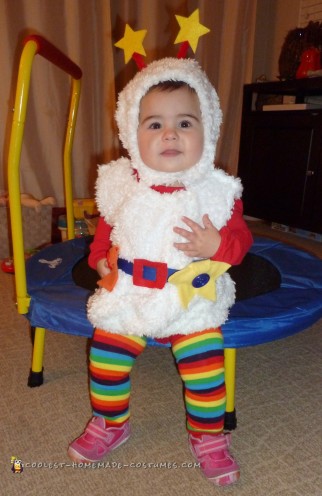 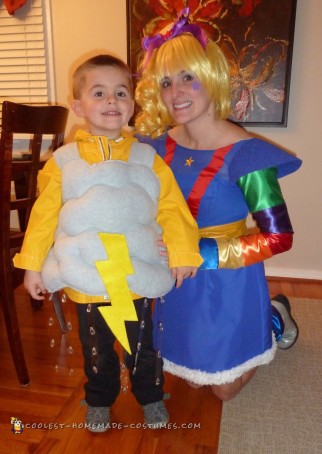