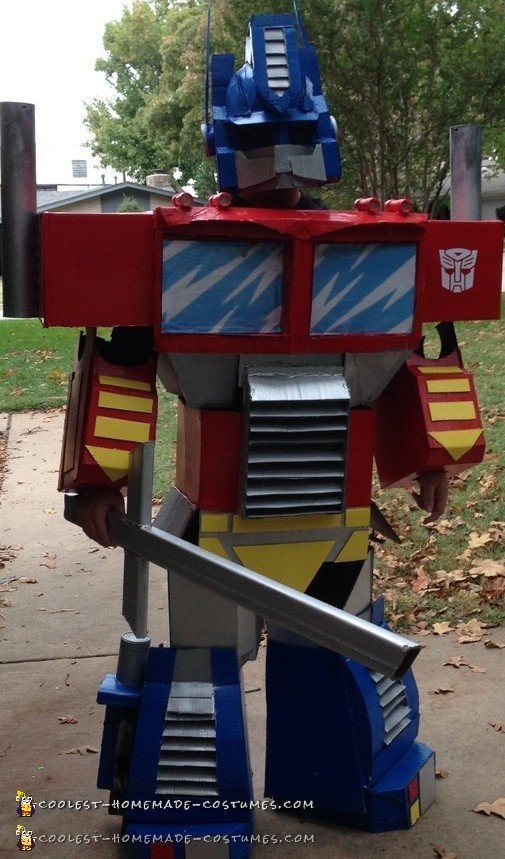 This is a custom cardboard Optimus Prime Transformer costume. I started my search for this years costume last year by googling through costume ideas and took pieces of ones that I liked and made my own version. I started off with the helmet because I knew it would be the hardest and most important piece of the costume. Without it, it wouldn’t have been worth it to finish the rest.

The Helmet is based off a construction helmet with cardboard added to it one piece at a time to make up the frame of it all. This piece took the longest and was the hardest because of all the trial and error on getting the “ears” and face plate to look just right. Once this piece was completed I got a big surge of excitement and was even more inspired to get the rest done in time for Halloween.

Once the helmet was done, I started on the chest piece next as it was the next important piece. This took considerably less time than the helmet and turned out just as I’d hoped it would. Flashlights were added to the top of this part to represent the KC lights. laminated print offs were used for the windshield reflection.

The Arms and Legs were next up. Creating the grills for the legs took a while to make it look right. The legs were a little harder than the arms because they had to be a trapezoid shape instead of a standard square piece. The feet and the legs were attached via parachute clips to keep them forward facing. The arms are filled with pipe insulators to allow a tight fit so it moved in the way i wanted.

The sword was just a really thick piece of support cardboard cut apart and glued back together for the handle. It is magnetized to the back of the chest plate for when its not in use.  The wheels on the legs were made of foam board and spray painted. The pipes on the shoulders were made from an old mailing tube and the spoilers on the legs were used bean cans.

I have used this year’s Transformer costume a couple times already and won 1st in my contest at work. Many of my coworkers like to walk around downtown area with our costumes. Several of them wear my costumes from prior years that I keep on display in my office. We get a lot of fun reactions from people passing by. Many drivers also pull over to request pictures. It’s like being a little kid again and just makes people happy. People’s reactions were by far the best part of all of this. All the hours, countless hot glue burns, and details added are well worth it to bring smiles to everyone passing by and its always fun to show off all the hard work and dedication it takes to make such a detailed costume. 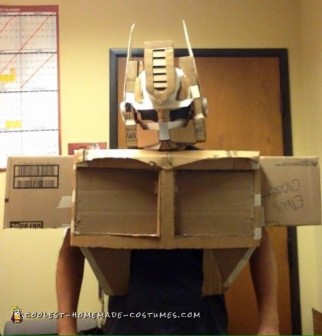 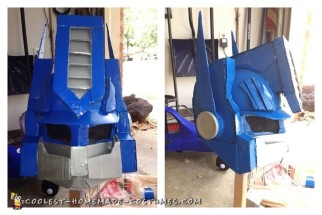 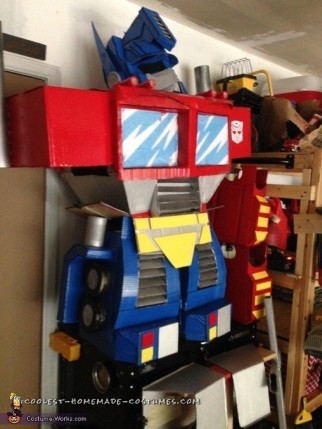