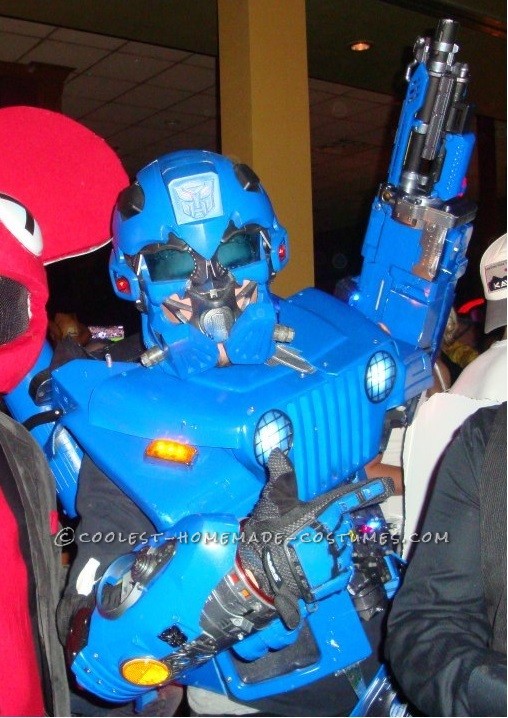 This Transformer costume idea was rolling around in my head since ever since my sister bought a used power wheels jeep at a garage sale for my nephew.  The basic idea was to cut apart a power wheels jeep (I bought my own, I promise, and used everything I could from it to to build a costume I could wear.

At first I focused on the Torso. I knew I wanted the jeep grill and hood to be prominently displayed so I decided to put it right on the chest. This was achieved by mounting it to a used plastic chest protector I picked up at a dirt bike rally. An old distributor cap is also placed in the front and houses the switches for the lights. The abs are made from some spare plastic and the jeeps windshield.  The back of torso consists of the jeeps roll bar, some ink cartridges, the main jeep body and back bumper.

The helmet I focused on next. After a few failed attempts I decided to cheat a little and bought a toy bumblebee helmet. Due to its original size I had to make modifications to the back, sides and front bottom of the helmet which was done with fiberglass, tag board, bondo and paint. I also placed the two “filters” as I came to call them on the front to give it a unique look. To finish it, I installed side lights and back lit the emblem on the forehead, then painted it.

The challenge really started making the legs and arms. Lets start with the arms. The right arm also consists of the bumble bee toy arm purchased from the local Goodwill.  Again, size issues required me to basically rip it apart and keep the pieces I needed. This was a shame as I really liked the mechanical motion of the original toy. Eventually the toy became a collar for my lower arm and an armored BMX glove use as the gauntlet.

No transformer is complete without some serious weaponry! The left arm basically consists of a Nerf machine gun (purchased from the local Goodwill) which was cut apart and gutted to accommodate an arm.  Some drainage pipe helped cover the rest of the lower arm and bondo and fiberglass used to complete the surrounding gaps. A light bar was placed on the side for effect, however during testing I burnt out the control for it and spent the next day re-soldering the LEDS to get it working again, but it turned out awesome. It mounts to the arm using Styrofoam for padding and a handle inside

The legs! I was really channeling Optimus when I put these together. I knew I wanted the upper legs to be light and smaller so I can have decent movement. Essentially they are just pieces of a 5 gallon bucket with odd pieces of plastic bits attached and supported by elastic and Velcro.

I really wanted to use the jeep wheels in the lower legs so 3/4 of the wheels were cut away and attached to half a plastic trash can. The knees consist of some old welding helmets I scrounged from the workplace dumpster and half a wall vent. They are attached to the legs using some old baseball shin guards I found at a local thrift store.

Once the costume was built and painted, I really wanted to top if off by installing lights. Most of these were LED units purchased from online or actual trailer lights purchased from the local hardware. All lights run of 9v power systems and really give a great effect when they are all on!

Halloween is my favorite time of year. I take my costumes seriously as they fulfill my need to be creative and build. I started working on this costume starting in April of 2012 and finished it just before Halloween 2012. This is by far the most labor intensive and, despite buying from thrift stores and dumpster diving, one of the most expensive costumes I have ever built coming in around $350.

All the work paid off however when I attended by brother’s Halloween party that year. No one had seen anything like it before. It looked great in bright rooms, dark rooms, close and far way. I received many appreciated compliments. It also help later that night when we went to a local costume contest. Walking into the crowded building, heads turned as people spotted a 6’4″ transformer step trough the door with all lights blaring!  The night resulted in the costume taking 1st prize! Cant wait to try and top it! 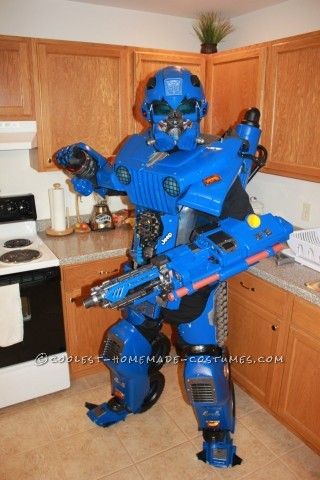 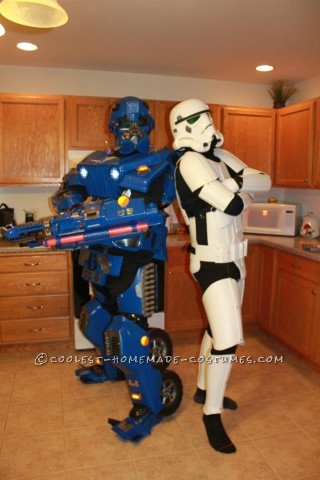 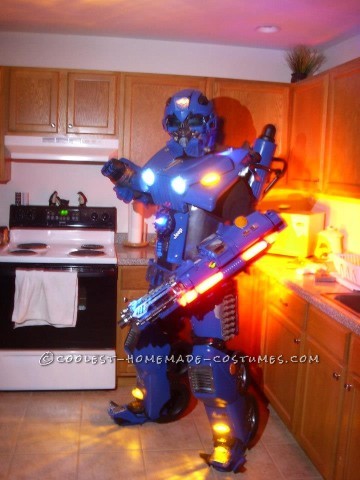 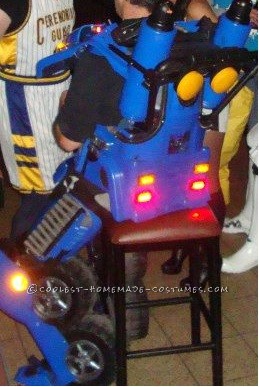