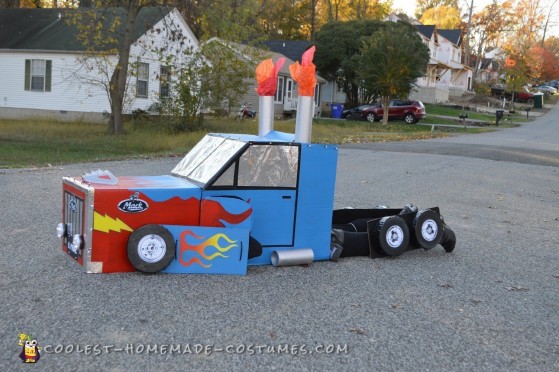 This was a fun costume to make! We weren’t sure if we could pull this off but it ended up coming together better than we had imagined. We took 2 boxes and painted them up and used LOTS of tape to hold the “hood” on so that it could flip back and forth. This was the hardest because we needed to make sure that with the many flips it wouldn’t break off.  We were going to use real wheels but wanted it to be a bit lighter so we used styrofoam and black tape with a print out of rims, I think it worked better. We used poster shipping tubes and some tissue paper for the flame look (all of which we already had). We used lots of zip ties too for the side barrels and to attached the wheels to his legs and arms. The best part of this costume was seeing people’s reactions to it!. They would see him walking in and think ok this is an ok costume but then I would yell out TRANFORM and he would drop to the ground and look like a Mack truck people LOVED and awweed over this costume!!!

We put approx. 15 hours into this but only cost us approx. $12 for the lights the rest were materials we had around the house.

The best part was having the crowd of people we didn’t even know cheering for him to TRANSFORM!!!

Boxes: You have to find the right size boxes. Luckily my wife had started her Christmas shipping and lots of stuff was being delivered so we had the boxes right there!

We had to tape them together with LOTS of tape so it could be used as hinges. Cutting the bigger box for the windshield effect was tricky but worked out well and then we used some aluminum foil to create the effect of a windshield.

Paint: We went with the colors of Optimus Prime, Red and Blue. It was easy to paint and add some flames on the front with paint. The rest of the flames were computer print outs..

Wheels: We used 2 inch styrofoam and cut them in 8 inch circles and covered with black tape and printed out a picture of rims.

We attached 2 for each “leg” area and 1 for each arm. We used zip ties to hold the tires to the cardboard.

Lights: These were store purchased battery operated lights.We just a drill to drill holes for them bulbs to fit through.

Mask: This was part of our sons store purchased transformer costume so we borrowed the mask but added the Optimus Prime on it 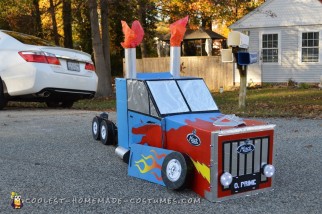 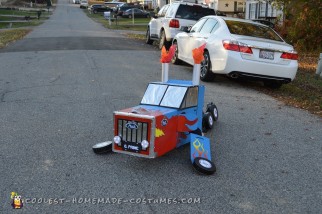 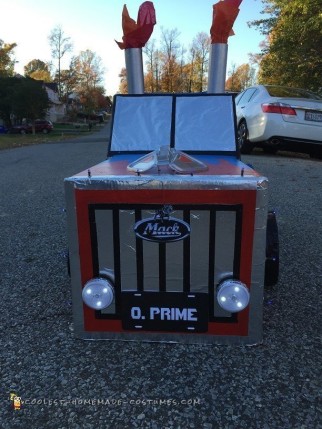 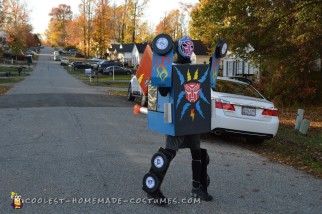 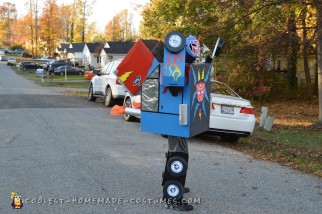 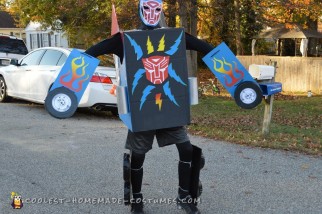