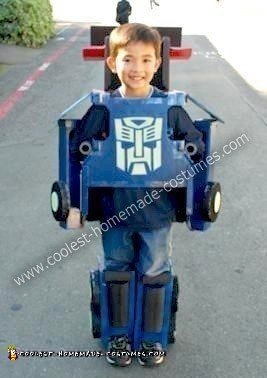 When Standing, the Homemade Optimus Prime Transformers costume looks like a robot and when kneeling/crawling, it transforms into a semi-truck.

See the costume in action:

I got the idea for this costume on youtube, with the various “transforming” costumes out there and decided to try my luck at it. I chose Optimus Prime since a semi-truck has a more “squarish” type of build and is easier to fashion out of cardboard. Plus he’s the coolest transformer in my book.

The materials used for this costume is black hardboard, around 7 sheets, which I have learned is not the ideal material, since the costume started falling apart when he wore it, I had to re-enforce all the corners and moving sections like the cover for his head with tape. I still don’t know what material is best for this, but I think hard foam might be best. Other materials i used are wood glue and spray paint and foam tube.

The costume consists of 3 sections. The arms, the torso/head, and the legs. I started out with the chest piece, which is really the bottom of the main body of the semi-truck which consists of the back and drivers area. I measured it to my sons torso, from his neck to his waist so that when he kneels down, his legs are not hindered. Then I proceeded to attach on the sides (driver cab only), then the roof to that.

I then measured the back portion, which is the largest part of the costume (the cabin area of the semi-truck). I made this slightly wider than the cab area, like most semi-trucks are nowadays. I then attached both the cabin and the driver cab with a slanting piece. By the way, to attach these pieces, I had cut each piece with an extra “flap” which I used to glue on to the pieces I am attaching to. I then proceeded to attach the doors, which will cover his arms when he is in truck mode. I also placed Velcro in between the door and body to keep the door closed. Then I created an open box for the hood with the bumper and attached that to the body of the truck.

In painting the costume, I used canned spray paint. Since the material was made of black hardboard, I had to paint on a 3 coats of white “primer” and then I painted it with another 2 coats of blue paint. The hood was then painted another 2 coats of red paint. The bumper was painted directly with 2 coats of silver paint, as that didn’t need any priming. The decals were basically graphics I found on the web and re sized to fit my needs. I used a carving blade to carve out the stencil. I sprayed on “tacky” glue or re positionable glue on the back of the stencil and stuck it on the area to be painted and just sprayed over it. The green paint seen on the photos are glow in the dark paint mainly the autobots logo.

I then bought a foam tube used to insulate copper piping and cut that out to be the trucks exhausts. Since gluing it seemed flimsy for me, I used zip tie to secure it to the main body of the truck by drilling a hole through the foam and hardboard and running the zip tie through it.

The arms are just rectangular boxes where I carved out a section at the top for his arm to go into and a hole in the bottom where the wheel is for his thumb to hook on. I attached the wheels with zip tie as well. I used a piece of hardboard as the hubcap and ran the zip tie through that, to give extra strength, since the wheels themselves are hard foam which come apart easily. I then placed foam on the underside of his forearms. This is the part that he will lean on when in truck mode. The legs are also rectangular boxes, which his leg can go through. I cut notches at the bottom front to fit his shoes, this also helps the legs from moving around when he walks. I also put foam at the front for when he kneels on them to transform. I re-enforced is with more foam inside as well. I painted both arms and legs before attaching the wheels and foam, using 3 coats of primer and 2 coats of blue paint.