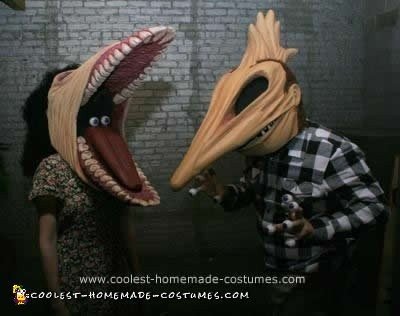 For years my girlfriend Libby has wanted to do a couples costume. Now she loves two things; Halloween and Gina Davis, so what came to mind? Adam and Barbara Maitland from Beetlejuice of course!

I am no stranger to making costumes, and have created The Fly, a full size LEGO Man and two Rock ‘Em Sock’Em Robot costumes.

I have no qualms about barely being able to see out of a costume if it looks awesome, but since I was making a mask for her as well, and she is rather small, it was important to keep the costume simple, easy to dance in (her prerequisite), and most of all light weight.

Since I was pressed for time I decided to use high density construction foam, available at Lowe’s or Home Depot for about $13 for an 8’x4′ sheet. I looked up some photo reference online for the masks and got to work.

I cut the sheet into squares larger than my head and used Liquid Nails to glue the pieces together. When it dried I used a drywall saw to carve out the main shape of the Adam mask. I then used the saw as well as a Dremel drill to carve out the head cavity. Then, using coarse sand paper and those spongy sanding blocks I began carving out the stretches and creases. Sandpaper eats this foam like butter, and it is very easy to get great details very quickly. I used the Dremel drill to carve out the eyes, nose and mouth holes. The hand on the top of the head was added later from a second piece of foam and glued on. It was them painted in acrylics and faux fur added for the hair.

For the Barbara mask I carved the large “C” shape of the head out of 4 pieces of foam. For this one, before I glued them together, I carved out a pre-existing head hole because drilling the hole out after it was all glued together took a long time. This new way proved much easier and quicker. After the pieces were glued together it was a matter of going in with the sanding again. I started my ‘mapping out’ the lip line and then drew on the gums where I wanted the teeth to go. I lightly carved out the notches with the Dremel for the gum-line and then smoothed it out with sandpaper, using the edge of the sanding block to make the divots between the teeth. I then used the Dremel to carve the details of the roof and floor of the mouth out as well as the holes in the teeth.

Lastly, I carved the tongue out of a separate piece and glued it in place after making sure Libby would be able to see out over it when completed. I then painted the head in acrylics and added the wig for the hair as well as the eyes on the tongue.

Every year we see a lot of Beetlejuice costumes, but the Stretched Faced Maitlands are in rare company. Looking them up online yields about 3-4 couples who have made these, and none to this caliber.

Why there are no latex masks of these I have no idea, but I am glad there aren’t any. These were a blast to make, and relatively easy. You can make anything out of foam and it is strong, lightweight, warm and cheap. What more could you want? I highly recommend it.

The one thing we were looking forward to on Halloween was seeing someone dressed as Beetlejuice. The previous year we saw a little kids dressed as one and we were hoping to see another, go up and tap him on the shoulder and ask to get our picture with him. We did end up encountering two people dressed as Beetlejuice, both women (an interesting and strange trend we have noticed) and they were just as excited to see us as we were them. When we got our pictures taken with them many people crowded around to get theirs as well.

We have a Halloween Parade in our town and we got to lead it in our masks, passing out copies of the ‘Betelgeuse’ flyers from the movie to the crowd, from which we heard many calls of “Beetlejuice, Beetlejuice, Beetlejuice!”
At one point the parade had to halt and the two of us linked up and danced as we waited. That must have been a site.

Both masks were a little tricky to see out of; in the Adam mask I was looking out the eye holes and the nostrils, but I could not see the end of the nose, causing me to poke a couple people, but I will never let being able to see get in the way of having an awesome costume. Libby could see straight, but had bad peripheral vision, and I had to remind her if someone said something to her from the side to turn slowly or she risked clothes-lining them with her huge jaws. We stuck close to each other and watched out for the other and didn’t have too many problems. The Nose on Adam proved very handy for pushing through crowds.

We went to a party on Friday night with some friends from out of town, one of whom went as The Shadow (who Alec Baldwin also played) and we were Team Baldwin all night.

The thing that was the most enjoyable was that the masks were easily removable, meaning that when people came and talked to us about how I made them, I could take it off and show them the inside and such. So many people were astounded I made these myself, and I encouraged them all to try their hand at carving this foam. It wasn’t just about ‘Look what I can do’, it was about “I did this and you can too!’.

All in all, despite the limited visibility, the masks were extremely easy to move in because they were so light weight. We could hear out of them fine and since they were essentially just helmets we had full range of motion with our bodies. They were also quite warm, which was good since it was really cold the night of the parade.

Response online has been interesting as well. Everything from people claiming I bought them (show me where), to asking me if I had actually WORKED on Beetlejuice and if they were the actual masks!”

Here are some more photos from the construction process:

18 thoughts on “Coolest The Maitlands from Beetlejuice Costume”