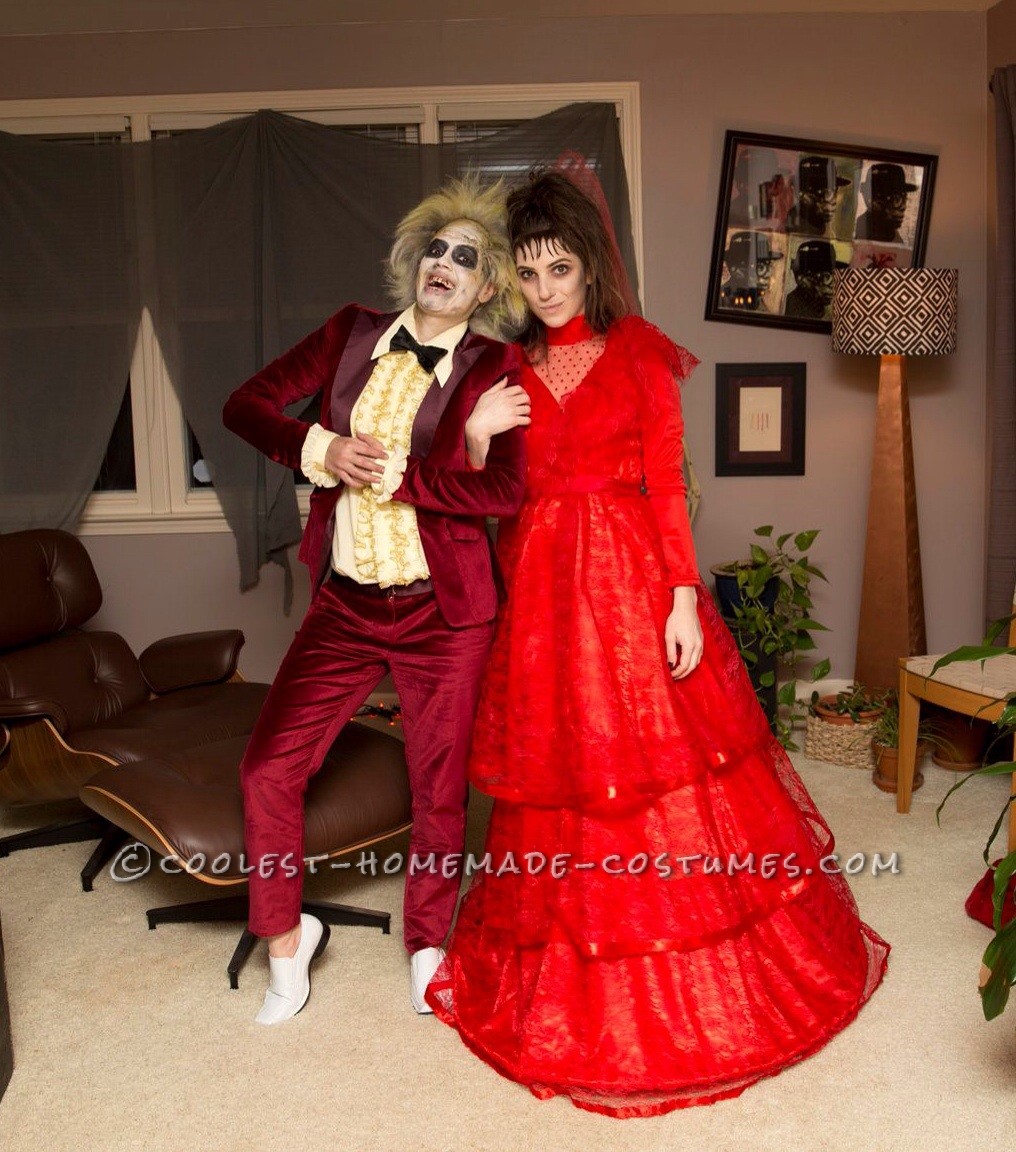 This was one epic Halloween for my girlfriend Jacquie and I. Yes, Beetlejuice is a girl under there; a very pretty one actually. See, my very festive and enthusiastic coworker throws a HUGE Halloween party every year. And basically if you don’t show up in a fully committed costume, you may as well go home. We spent the last few months putting these Beetlejuice homemade costumes together.

We both have art backgrounds and an obsessive appreciation for film, not to mention a nostalgic love for iconic Tim Burton movies. Target just so happened to have a women’s velvet burgundy suit this year. And YouTube has some awesome Lydia makeup tutorials.

The styling and spraying of a good wig plus a latex bald cap helped make Beetlejuice look truly grotesque. The grimy yellow teeth and creepy Michael Keaton mannerisms put her costume over the edge. It was an experience to say the least.

She really became Michael Keaton. It was hilarious and creepy actually. I kept pulling out photos of Jacquie to prove to people she wasn’t actually ugly. It was also a reminder for myself. I created the perfect clip-in bangs and just so happen to look enough like Winona Ryder to pull Lydia off.

We also got to celebrate Jacquie’s (aka Beetlejuices) 34th birthday at the party. You can see in the photos I had a kick-ass birthday cake made that doubled as a prop to our costumes! It was decorated to look like a Beetlejuice and Lydia wedding cake!

Our costume was modeled after the wardrobe from the END of the movie when Beetlejuice tries to capture and marry Lydia. Two birds- one stone! So anyways, I have Xena the Warrior Princess and a minion distract Beetlejuice in the other room while we get the cake ready.

Reactions to our Beetlejuice Homemade Costumes

The surprise birthday cake is a huge hit and also a success. In true Beetlejuice fashion my always entertaining and slightly sauced Scorpio of a girlfriend soaks up her shining moment and throws her face into the cake. Literally; with her mouth wide open. Tim Burton would have been impressed.

I’d like to think we nailed it this year. ;) 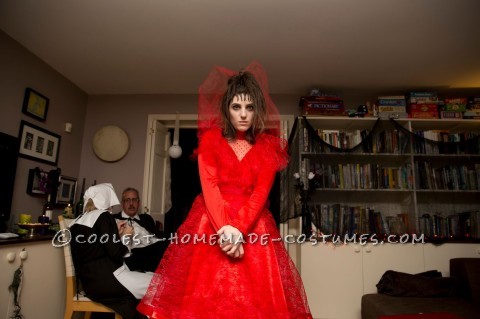 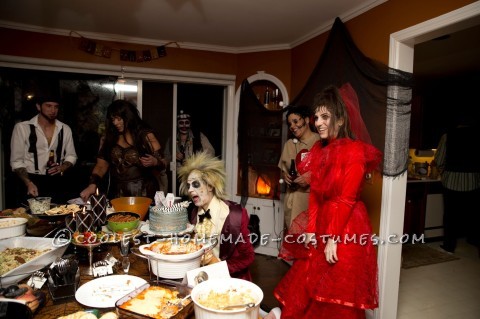 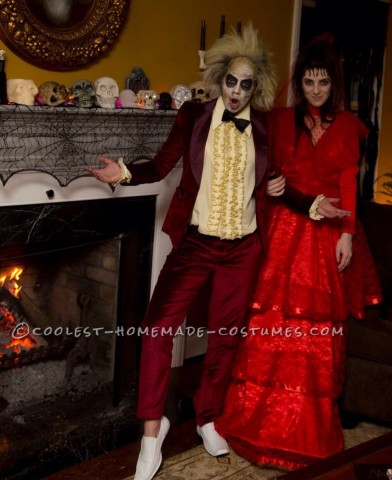 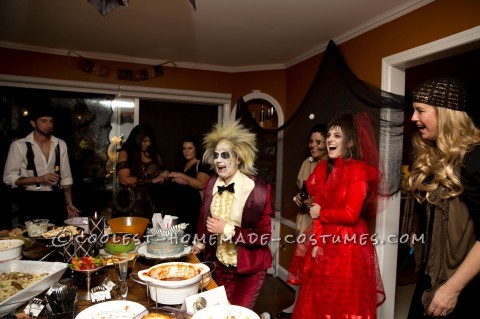 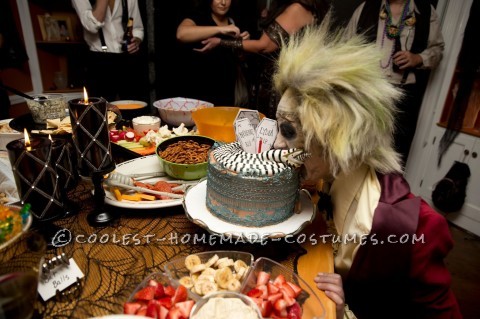 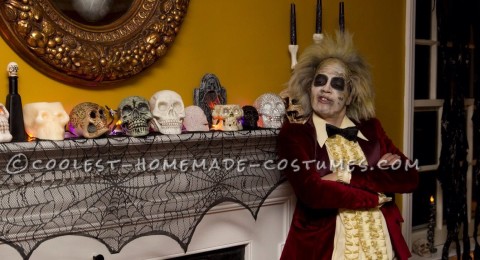 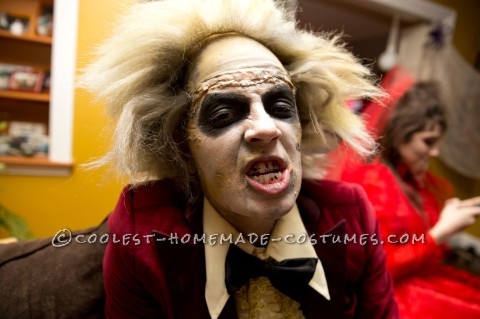 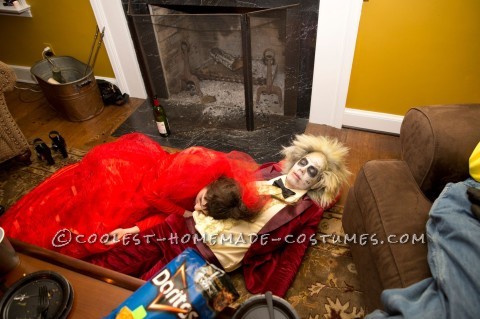 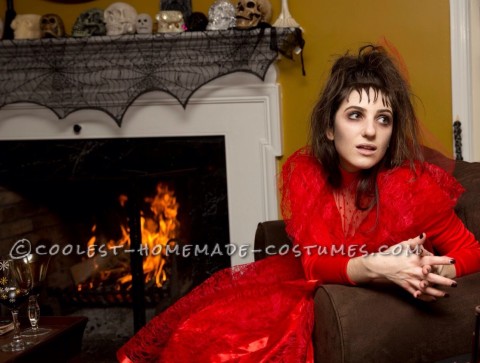