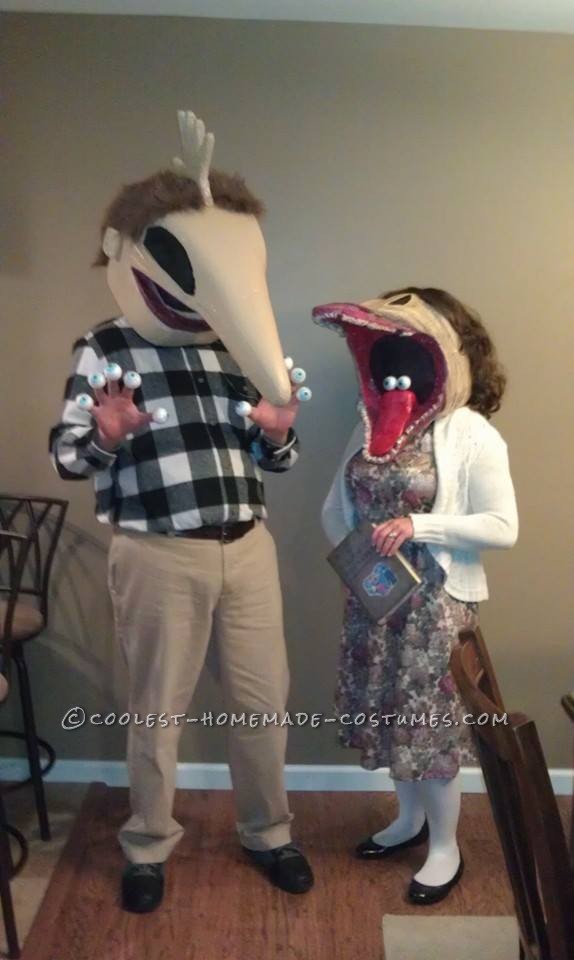 My husband and I attend a halloween party every year where most of the adults dress up, and usually we try to come up with a cool idea to dress up as a couple. This year we had a really rough time coming up with something awesome, we have done bride and groom zombies (which is when my husband proposed), Al and Peggy Bundy, but nothing this year was catching my eye. After countless hrs researching ideas for couples I found this website and the idea for Barbara and Adam Maitland from Beetlejuice in the scene where they stretch their faces to scare the new family in their home. I found the directions that were posted and saw a lot of paper mache options but the one with the construction foam really caught my eye. It sounded easy enough, even though neither my husband or I are extremely artistic. My husband went as Beetlejuice the first year when we met, so I thought the theme would be fitting as well. The idea of using the foam seemed like the right choice to get the detail that we really wanted in the masks. So I bought the foam and got to work.

I started my costume (Barbara) a month before the party, and it took me up until 3-4 days before the party to finish it. So it was very time consuming but well worth it! Apparently I am not as talented as the one before me who was able to have his sanded down into shape in ~ 5 hours because mine took me almost  4 weeks just to shape. I found my dress at a local thrift store for only $2, but his shirt was much harder! Who knew that you could not just walk into any store and find a black and white flannel?? His we had to order online, and then after I got it I found one at a menards store when I wasn’t even looking for it! I got a cheap wig in the halloween dept for Barbara’s mask and we used faux fur for Adam’s hair. We were going to use the black tights to cover the face holes so we could see out but the double sided tape we used wouldn’t hold it, so instead I came up with the idea to use some window screen that I already had which turned out to work great! At the hobby store I found a pack of 12 small styrofoam balls that worked perfect for the eyes on my mask and  for Adam’s eyeballs on his hands. I found a fake book at the store that I covered in brown craft foam and then etched with a pen “Handbook for the recently deceased”. I found the picture for the cover online, edited it a little to look old, and glued it to the front. Then I roughed it up a little with sandpaper and dusted it with baby powder to make it look old. It was hollow on the inside and had a magnetic closure so I used it as a makeshift purse and also kept my husbands extra eyeballs in it when he wasn’t wearing them. It made for a really nice extra prop for our costumes!

My husband’s mask which one would think would be the easier of the two, ended up giving us the most trouble. Although he did wait until the last minute to start his; I think he was waiting to see if I would give up on mine, but it just made me that much more determined! We started his just over a week before the party we cut and glued just like the other one, and had the overall shape cut out and sanded smooth. But no matter how hard we tried we could not get the angle of the eyes/nose right. It just kept looking more and more like a mascot duck!! So we tried cutting the nose off and gluing extra spacers in to get more of a straight angle but the glue wouldn’t hold. So 4 days before the party I decided we were going to start from scratch!I bought more foam cut it out, glued it together and Prayed for the best!! After 2 days the glue still wasn’t dried but there wasn’t anything we could do at this point. He held the pieces together while I sanded away trying to get the right shape. I was ready to conceit to defeat, he took the day before to finish sanding and molding the head and attaching the hand. The day of the party I still had to primer, paint, attach the hair, the screen that covered the face openings, and ensure that the hand and jaw would not fall off (because the glue wasn’t holding) by using toothpicks to hold them in place! Needless to say we finished his 2 hours before the party started!! If we had more time we could have made his look so much better.

Regardless of all this the costumes turned out really good! Everyone at the party loved them and were ready to just hand over their money for the contest because they knew we had won. No one could believe that we carved them ourselves out of foam and we had a lot of fun taking pictures with them! I would say the most satisfying thing about this was the fact that even though there were times I was ready to toss my mask I’m so glad that I stuck it out. They were the hit of the party and it has opened up a whole new world for us for costume ideas! We already have some great ideas for next year; this stuff makes any costume idea imaginable!!! 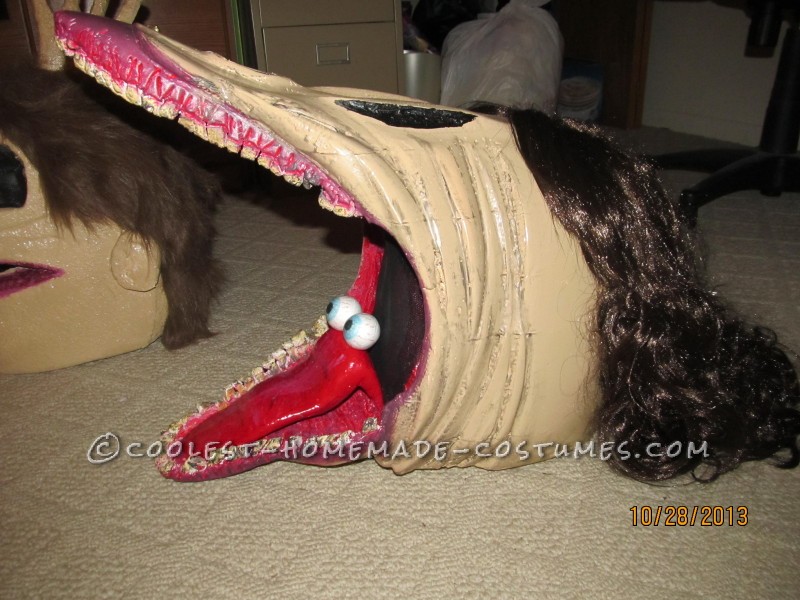 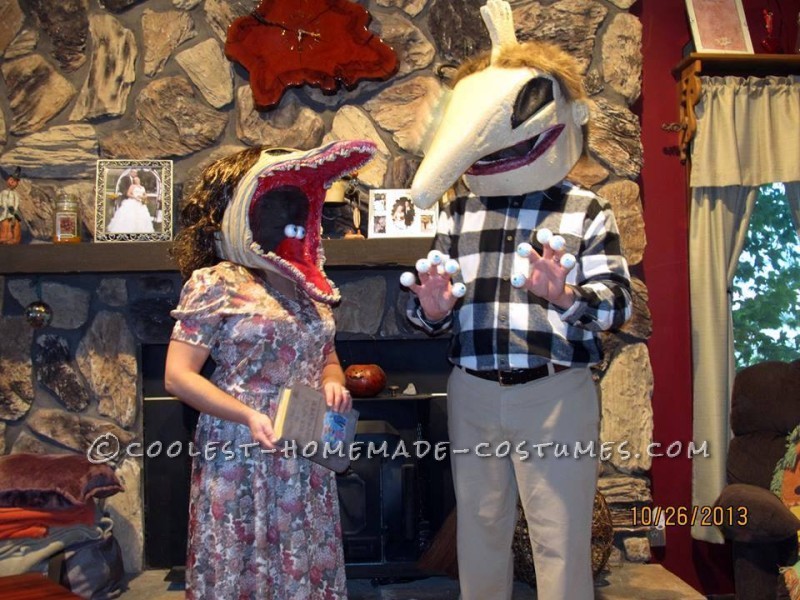 At your local hardware store you can by sheets of dense construction foam which is what they use for a lot of new home insulation. I measured out how much space I would need for my head space with a little extra room for shaping/ sanding and then how large I wanted the the jaws to be. (Some of this was already pre- determined for me as I had to cut the sheet in the parking lot so I could get it home in my SUV). I cut out the head opening before gluing it together to save time. I used loctite glue specific for foam to glue them together and waited for them to dry. Make sure you are careful what kinds of glue/ paint you use as some of them will eat the foam!

Once the glue was dry I drew out the shape I wanted for her face on the side and figured out where my eyes would be so I could be sure to see out once finished. I said a quick prayer and started cutting the shape out with a drywall saw. It made me really nervous at first as boxy as it was but I knew it had a long way to go! Once I had the initial shape I Could start sanding and rounding things out and making it smooth. This was when I started to feel much better and excited to see the end result! 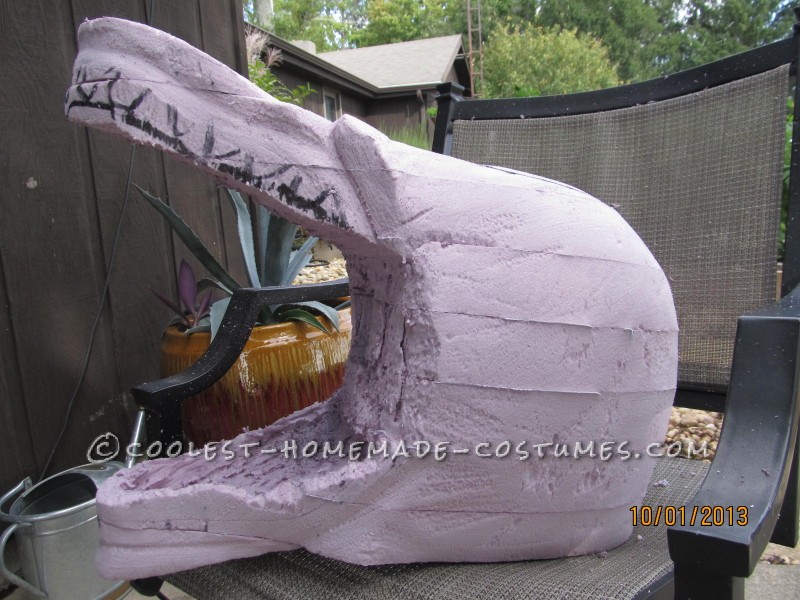 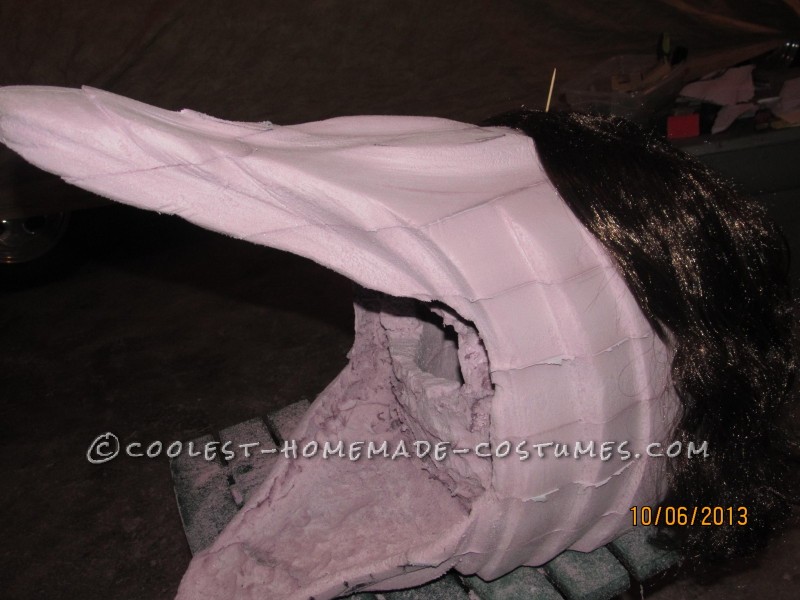 I cut the tongue out of a scrap piece of foam and sanded it down for the curvy shape. Then spray painted it red. The eyeballs I painted and attached with toothpicks into the top of the tongue. 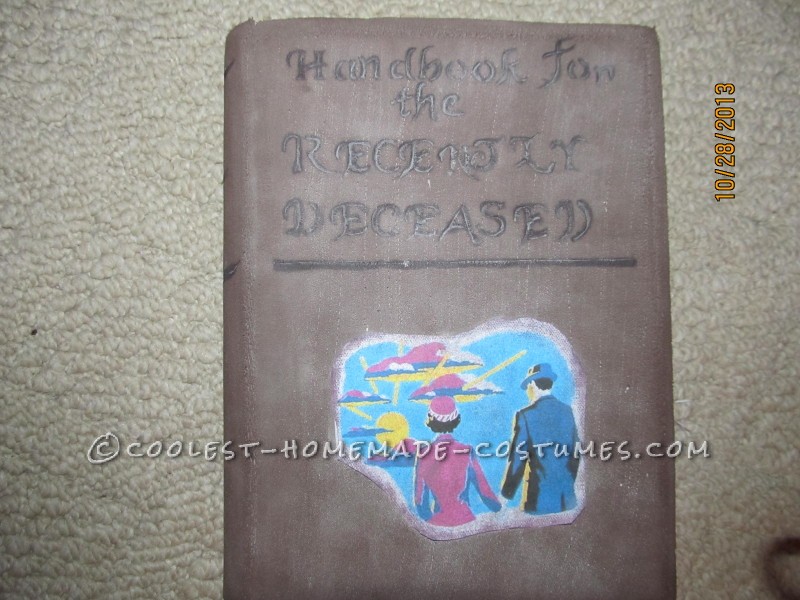 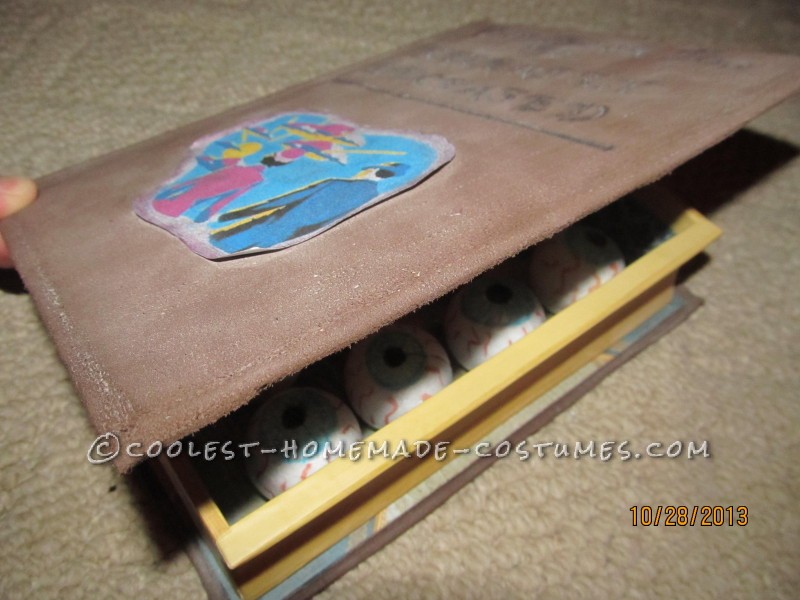 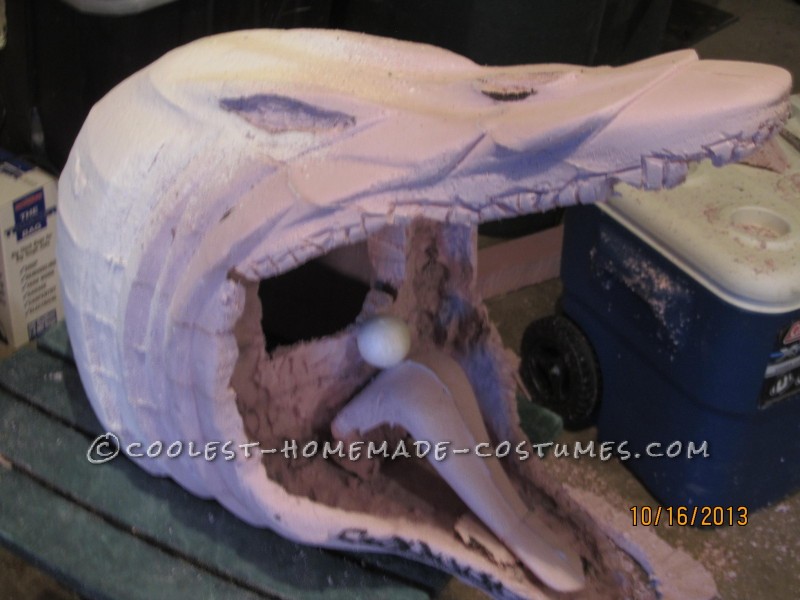 About halfway through my project I realized that the last person to do this had glued his pieces vertically, and I had done mine horizontally. Not a major concern, except that I think my way proved to be much more difficult and time consuming! And now I had to figure out how to cover up all the horizontal lines that were showing up were I glued them together. So I used a spray drywall spackle to coat the entire mask and the lines and then sanded it down. Then I was ready to primer and paint!

I used a water based spray paint to get the flesh tone color on the outside and then a red spray paint on the inside of the mouth. I used acrylic paints and painted all the teeth by hand giving them a yellowish, blackish color to make them look rotten. I added some more acrylic paint to give a more natural look to the gums, and did some shadowing around the stretches in the side of the face. I also had a few spots were the spray spackle did not fully cover, so when I spray painted it started to eat the foam. Luckily it was in the stretch lines on the side of the face and was able to easily cover them with some of the dark shadowing so it wasn’t noticeable! We added the wig with bobby pins, glued the tongue and attached the screen inside the mouth with a clear double sided tape so  I could see. The end result was so much better than I could have imagined!! 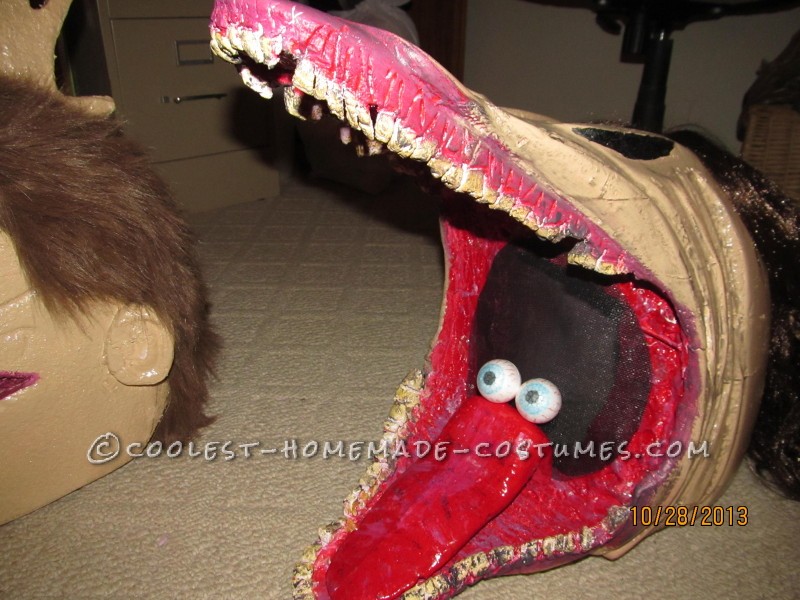 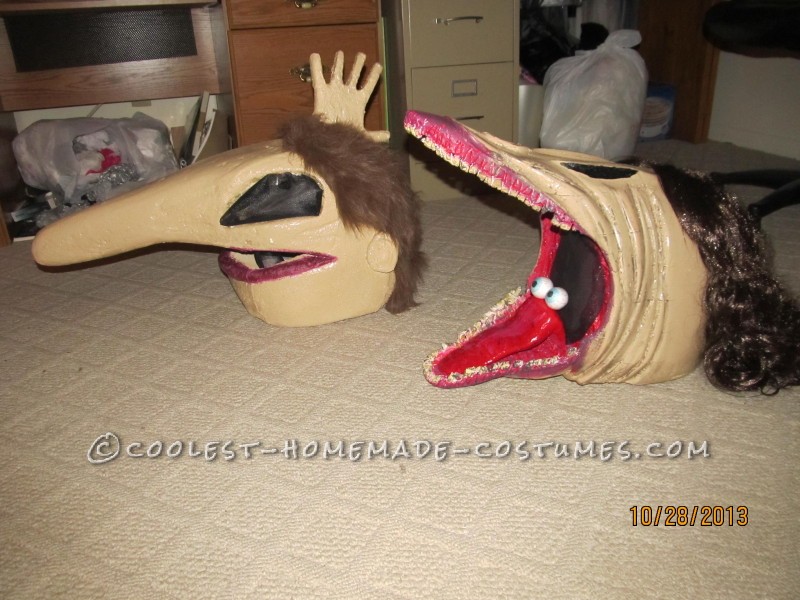 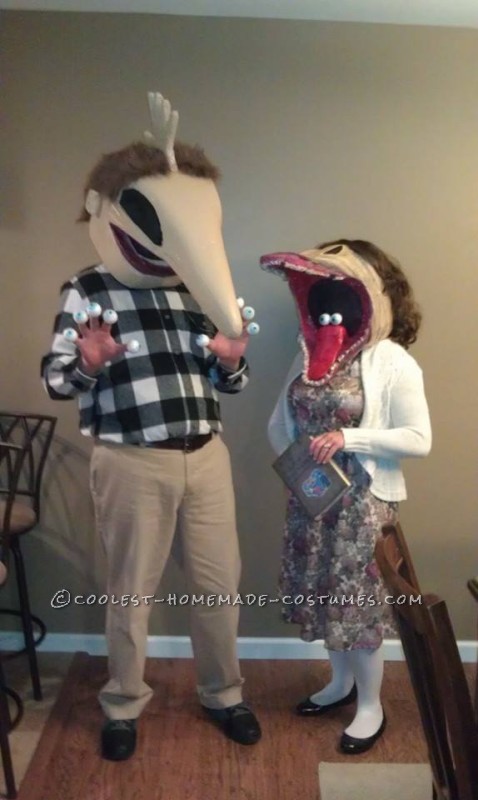