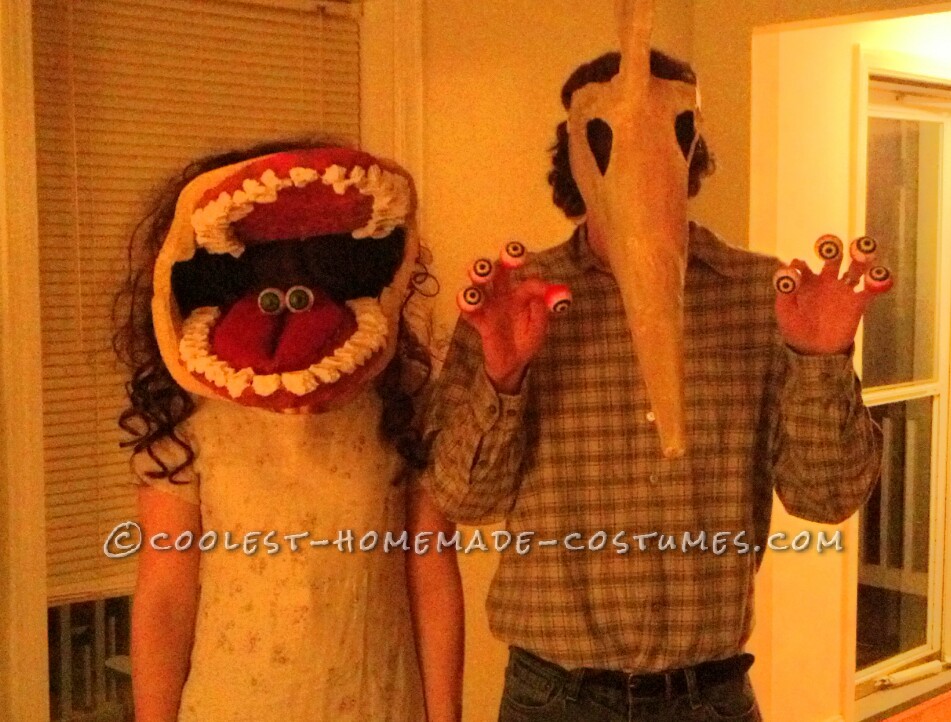 I watched Beetlejuice to get me into the Halloween spirit this year and knew that Adam and Barbara Maitland would be the perfect choice for our Halloween costumes. Unfortunately, I didn’t make this decision until a week before we had a large Halloween party at my house. I spent my entire weekend along with almost every night leading up to our party working on our costume. It was a huge hit and was worth scrambling to get it done. In addition, every year, my husband and I travel to Salem, MA to walk with the thousands of people that flood the downtown area on Halloween. I always try to top my previous year’s costume and I think I have succeeded. We were constantly being stopped for pictures and people were giving us so many compliments. Many people said it was their favorite they had seen all night. It was a fantastic night and all of the hard work paid off. 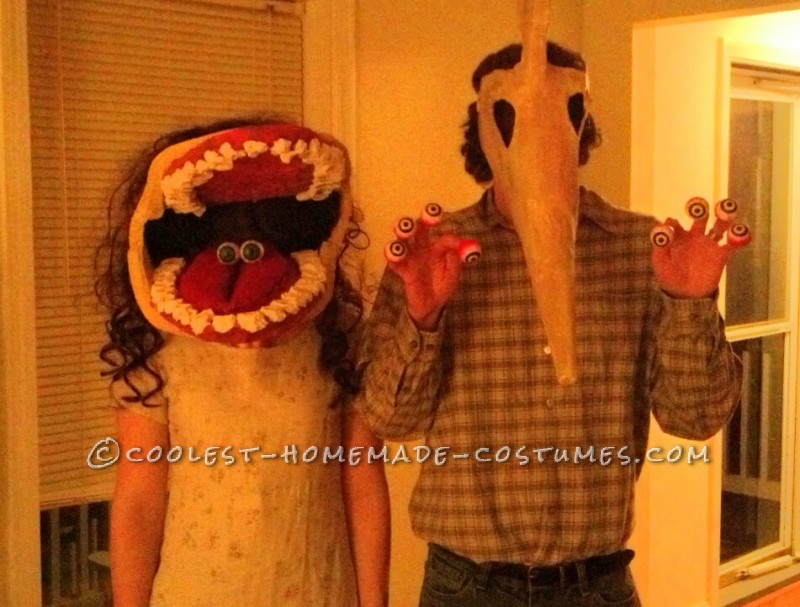 Creating The Mouth For The Barbara Maitland Costume

I started the Barbara Maitland costume with Styrofoam, soft foam and a glue gun. I cut out of the hard Styrofoam into the shape of the mouth and then added the soft foam for the tongue and teeth. I then glued down the middle of each individual tooth to give it more of a realistic shape. I then used a product similar to paper mache to create the inside of mouth’s texture and sides of the teeth and gums. After it dried, I painted and blended colors until the mouth had a worn texture to it. 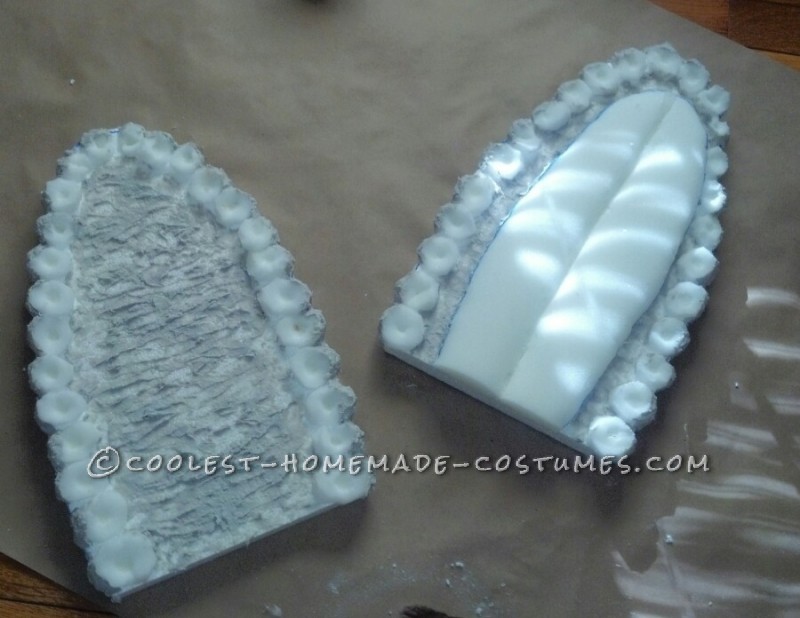 Getting Started On The Mouth 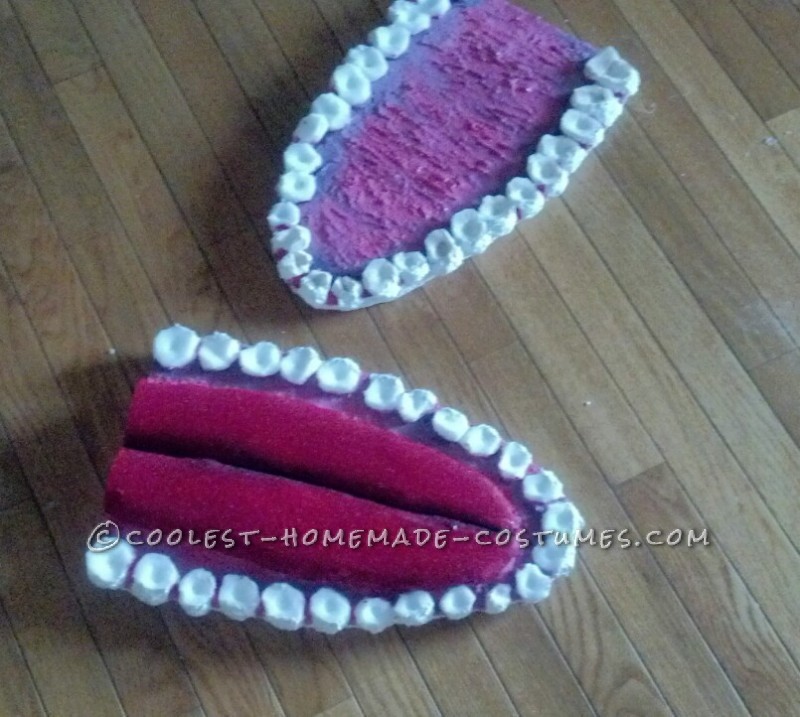 Once the two mouth portions were done, then came the challenge of connecting them. I built a cardboard structure in a circle shape and glued in the Styrofoam mouth pieces. I also used a piece of cardboard behind each mouth piece prop open the mouth to give the visual effect that the mouth was opening wide. I then covered the cardboard in soft foam and connected the mouth pieces. I painted the outside and cut out two holes in the top for the eyes. I then glued on two eyeballs on top of the tongue made out of an eyeball ring I found. 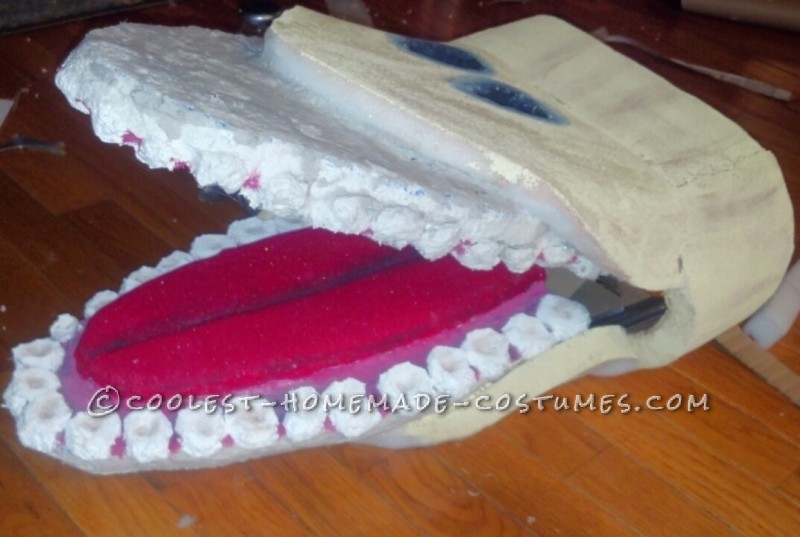 Covering My Face and Getting It To Stay On

I added black netting behind the opening of the mouth to conceal my face and added padding for my chin to rest on. I added elastic straps to the back of the mask and concealed it with a brown wig. I then added a dowel to the base of the mask as the straps did not fully that the mask was very top heavy and kept leaning forward. On Halloween night, I concealed the dowel inside my dress and wrapped my torso with a medical bandage to hold the dowel in place.

For the Adam Maitland costume, I bought a Styrofoam cone and also used cardboard and more Styrofoam to create the shape of the mask. I used duct tape to shape the mask and cardboard. I cut out the eye holes and put black netting under the hole to keep the area dark.  I then paper mached the entire mask and painted it when it dried. I added a strap to the back to hold it on his head. 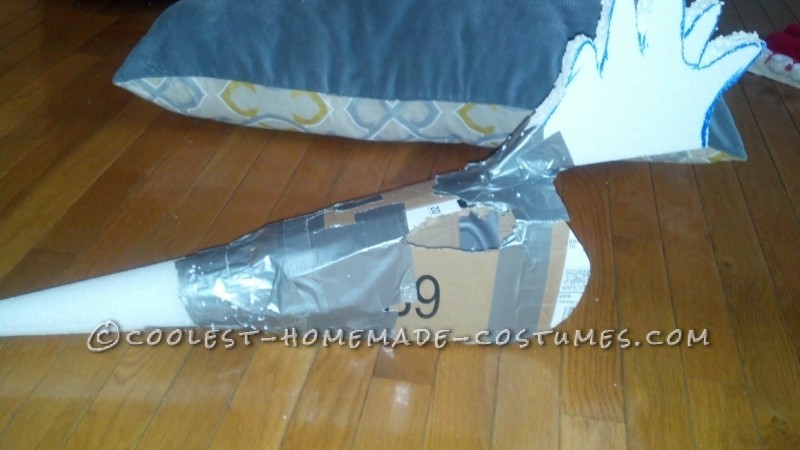 Structure Of The Mask

Eyeballs On The Hands

For the eyeballs on the hands, I found pre-painted Styrofoam eyeballs. I used the tip of my glue gun (without pushing out the glue) to melt the Styrofoam to create holes for fingers. I used a putty to keep them in place the night of Halloween.