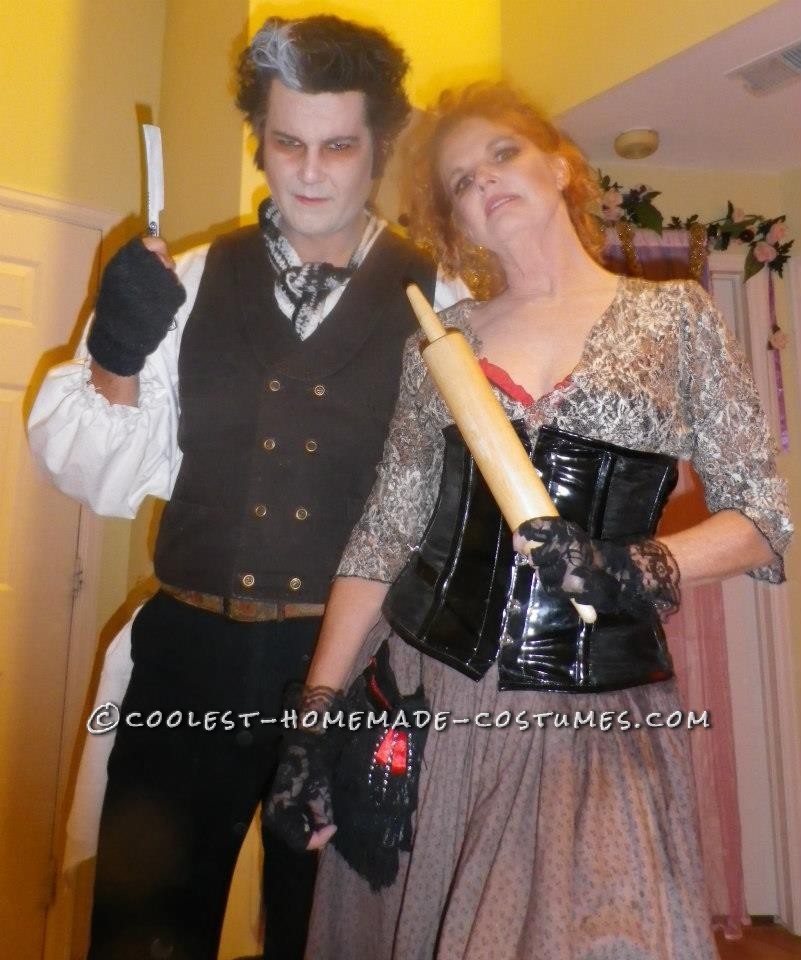 We decided to be Sweeney Todd and Mrs. Lovett for Halloween near the end of August.  This gave me plenty of time for shopping at the thrift shops and locating items that would need to be used for the costume.  It also gave him some time to grow out his hair since he didn’t want to use a wig.

I found an awesome site that provided information on some of the details people miss when they are putting together his costume, like his ring and his belt hook.

VEST – This was the hardest piece to find.  I knew I wasn’t going to be able to find a brown canvas double breasted vest at any thrift shop, so I started looking online.  I was able to find a Scully double breasted canvas vest for about $45 online plus shipping and it took 4 weeks for shipping, I think it was coming from China.  Once it arrived, I still needed to do some tweaking to so that it would be tight enough around the waist.  I took a seam ripper and took off the original belt loop off the back and added one that would allow the vest to be more fitted.

SHIRT – I couldn’t find exactly what I wanted here.  It was supposed to be a linen shirt with puffy sleeve and a V neck with button collar and with button cuffs.  The closest I could find was at a costume shop, which they sold to me for half price since it was used.  It was a V neck with puffy sleeves, but no button on the collar of cuffs.  It also had lace around the cuffs (for a pirate I think) which I removed with a seam ripper.  If I had more time, I probably would have added the cuffs, but unfortunately I only found it a few days before our first party.

SCARF – Sweeney wore a thin black and white knit scarf in the movie.  I decided to purchase some yarn and make this myself.  Although I don’t know how to knit, I was able to crochet the little thing.  It still turned out well, and I don’t think anyone noticed it was crocheted instead of knit.

STRAIGHT RAZOR – Most clubs won’t allow weapons of which a straight razor certainly would be considered.  Therefore I opted to purchase an imitation straight razor from the Wizard’s Chest (local costume shop) which also came with a razor sleeve on the belt.  We placed this belt UNDER the belt we actually wanted to show so that the sleeve would still hang down and he would have a place to keep the razor – although, I think he never really let it out of his hands.

BELT CLIP – This was interesting to make.  I found one similar to the one used in the movie online, however I thought the cost plus shipping was just too much for the prop. I used a silver heart charm (3.99), a couple of heart jewels ($1.99/package) that you would use on a shirt from Wal-Mart and I also found an ornate butterfly earring (it was in a set of 6 earrings that were on sale for $2).  The belt clip itself I had purchased from Amazon ($1.79).  I used a piece of wire to attach the butterfly to the belt clip.  Took the backing off the jeweled charm hearts and placed one on each side of the silver heart charm then attached the heart ensemble to the butterfly with the already present hook on the silver heart charm.

RING – In the movie, Sweeney took a ring from Mr. Pirelli after he killed him.  He wore the ring on his pinky.  I found an awesome elaborate ring at thrift store.  It didn’t quite fit his pinky, so we cut the back with metal cutters and expanded it a little, filed the sides where it was cut so it wouldn’t pinch his fingers, and added a piece of wire to ensure it wouldn’t fall off.

OTHER ACCESSORIES – Grey fingerless gloves, brown belt, and black dress shoes were all items he already had in his wardrobe. And we can’t forget the white rag used on the belt clip – for shaving cream and blood.

HAIR – Thank goodness he was able to grow this out some.  We still said he looked like Sweeney with a haircut.  We got a couple of cans of spray on hair color, one black and one white from Wal-Mart (WM).  These can also be purchased at Halloween stores, but it was about half the price at WM. We took the strip that should be white and covered it with some plastic wrap, keeping it in place with bobby pins.  Sprayed the rest of his hair black and pulling it straight out to make it look fuller.  Then we took the strip and sprayed it white – keeping really close and not getting any over spray on the black.  The white hair color spray didn’t work quite as well on his hair color, so we actually got out the white liquid shoe polish to finish off the job.

MAKEUP/SIDEBURNS – Neither Sweeney Todd or Mrs. Lovett are “white”, they are pale.  I found an IVORY base makeup and used this from on the neck area up and covered his face (including eyes).  I used a plum blush very low on the cheek line.  I also used this same plum as the base for the eye makeup.  Then I used a rust color shadow closest to the eye on top and bottom.  He had natural colored lips, so I went with a muted orange similar in color to the rust shadow.  This was the same makeup used for Mrs. Lovett, just in a more masculine manner.  And don’t forget the sideburns.  Sweeney Todd had bushy sideburns.  Since my Sweeney Todd had a “hair cut” we also used shorter sideburns… mostly because that was all I could find in black.

He received so many comments on his costume, it was amazing!  Plus he had studied the movie and got many of the mannerisms just right.  We didn’t add any blood to the costume so the pieces could be used with other costumes in the future.  Like Mrs. Lovett’s costume, the Sweeney Todd costume was warm for the October night air walking from the car to the Halloween party.  Look for the Mrs. Lovett costume, also posted on this site. 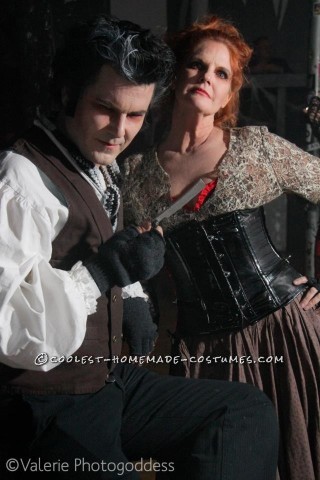 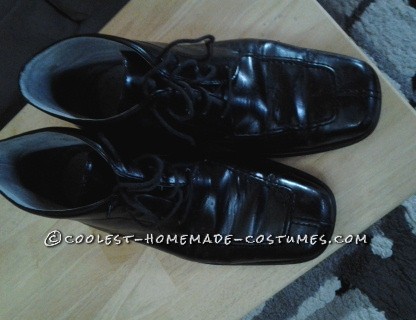 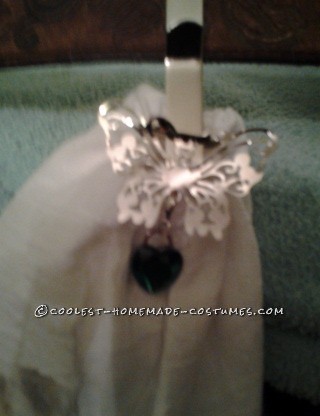 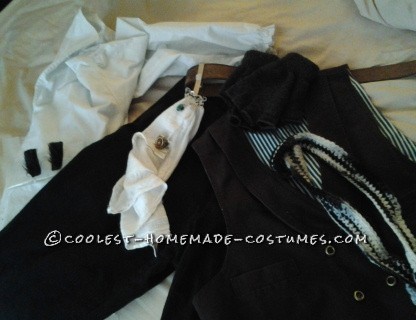