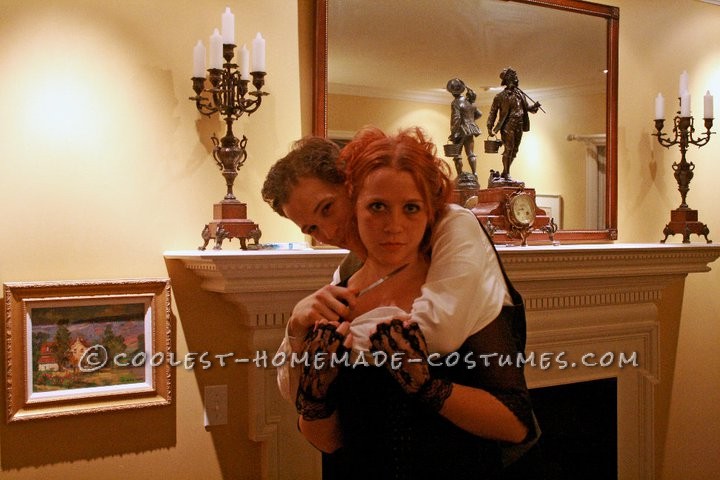 A few Halloweens ago, my then boyfriend and I decided to dress as Sweeney Todd and Mrs. Lovett. The trickiest part was his vest.  I’m not too handy with the sewing machine, so we set out to find a double breasted vest that wasn’t obscenely priced. Unfortunately, we weren’t very successful with that, but did find a grey vest at Buckle that was close enough.

He wore a dress shirt and pants he already had, and I did spray a grey streak in his hair (although you can’t see it in the picture for some reason). I used a corset I already had from a previous Christine from Phantom of the Opera costume and a long black skirt. For the top, I bought a blouse and added the sheer sleeves and lace. Gloves were found at a costume shop for around $2. We also went hunting for a vintage razor blade at antique shops in our area.  We did find one, but it was surgically sharpened and we decided we probably didn’t want something like that around our group of friends. So, I found a letter opener that would look similar.

My hair is already red and curly, so I just let it air dry, back combed it, and pinned it up.  All in all the cost probably ended up being $40, most of that being spent on his vest.