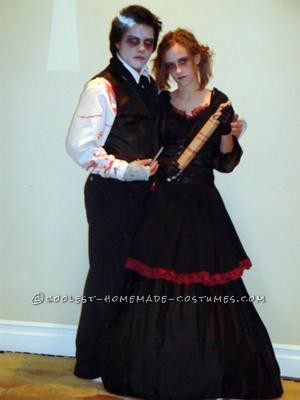 The Sweeney Todd movie just came out so my boyfriend and I knew exactly who we wanted to be for Halloween. Everything that you see was bought at a thrift store and altered.

Sweeney Todd: basic white shirt, black cloth tied like an old fashion tie, a red vest that we found and turned inside out (because the other side was black), black paints, and grey socks that were cut and made into gloves. The hair was sprayed black and then the white strip was added after. The razor is just a flip comb that we sprayed painted silver.

Mrs. Lovett: (A little harder than Sweeney Todd). First I bought a large black skirt and rented a Pettiskirt from a local costume shop and wore it underneath to give it some shape. Then I found another shorter black skirt and bought some reddish/maroon lace to add to the bottom. I found a light see-through-ish shirt and added the same red trim from the skirt to the top of the shirt. And finished it with a corset on top. The gloves were bought and the fingers were cut off. Hair was curled and crimped and put up in messy pigtails.