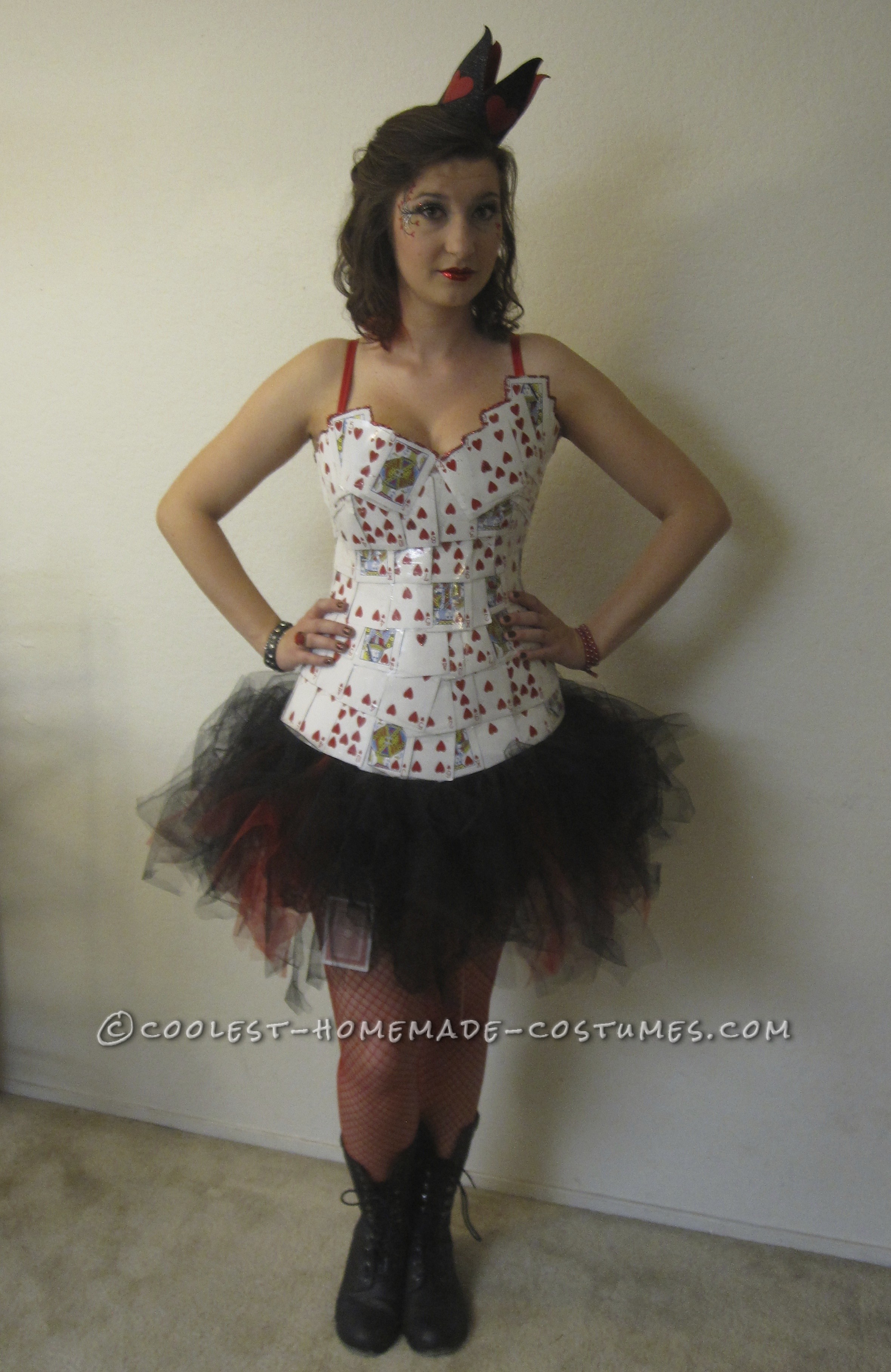 To make the homemade Queen of Hearts costume, I used playing cards, red and black tulle, black elastic, a white tank top, hot glue, red glitter, red ribbon, black tape, clear tape, a black headband, red scrapbook paper, and glittery foam! I used about 9 decks of cards, but since I only used one suit for the outfit, it came out to about 115 cards.

First, I put the white tank top on, and my friend helped me to hot glue cards to it. This step took a little bit of experimenting, but we finally figured out how to make the cards more flexible. Before we glued the cards, we soaked them in a bowl of water to soften them and then allowed them to dry before gluing. We started at the bottom and worked our way up, gluing one layer at a time, all the way around, about 2/3 of the way up the tank top. Once we finished the bottom part, we began to fan the cards out to form the sweetheart-type neckline. On the back, we glued the cards face down. Fair warning… for this step, you get very tired of standing and rotating as your friend helps you glue the cards, but the product is definitely worth it!

Once the cards were all glued to the tank top, we put clear tape over them, cutting small pieces and taping along the edges of the cards in a horizontal direction so that they would not bend up as easily. Then, my friend cut in a straight vertical line directly up the middle of the back, and I carefully took it off so that the cards would not fall where they were cut at the back. I recommend not wearing anything underneath the tank for this step, because otherwise it may get sliced accidentally!

After we got the corset off, I cut a small section out of the back, and then put the black tape along the edges of the cut on both sides. Then, I hole punched along the edges, and used red ribbon to lace up the back in a corset-style pattern. It was tough to hole punch through the cards at certain places, particularly where the hot glue was used between the cards! The entire process of the top took around three to four hours– again, it is a long and difficult step, but the end result came out awesome!

For the skirt, I used red and black tulle, which I cut into strips that were about 2-3 feet long. I used two strips of elastic, tied together at one place to go around my waist. On the top layer, I attached the strips of black tulle by folding each in half, looping it around the elastic, and pulling the ends through the loop. I did this all the way around the elastic, and then repeated the process with the red tulle on the bottom elastic. I then trimmed the stray pieces of tulle so that the red was barely peeking out from under the black, and then hole punched extra cards, tying them to random pieces of tulle so that they would hang from the skirt, almost reminiscent of a mobile that hangs over a baby’s crib!

For the crown, I cut a crown shape out of black glittery foam, and stuck it together in a circle for the crown shape. I cut two slits in opposite sides of the crown and inserted the headband through, so that I could wear the headband to keep the crown on my head. As a final touch, I cut hearts out of the scrap-booking paper and glued them to the crown.

The reactions to this homemade Queen of Hearts costume were priceless! The end result was exactly what I had hoped for, and I couldn’t wait to show it off to my friends and family. I got compliments from nearly everyone I met, and people couldn’t even believe that I made the costume myself! :) 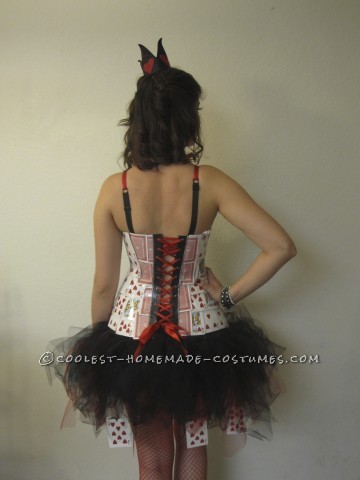 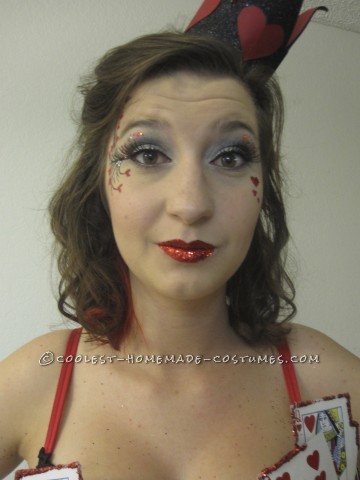