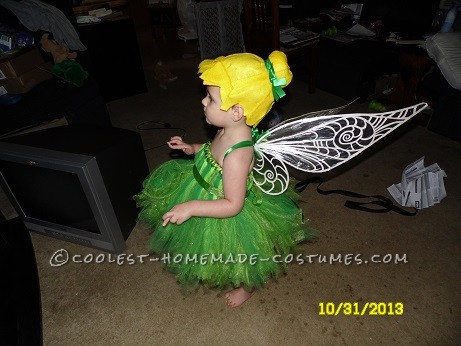 Planning out the Tinker Bell Costume

I started planing the costume back in August. Thinking and researching different things I could do to make all the hard work I was going to put into the costume well worth it in the end. I knew that the wings would be the hardest thing to do. Since I decided the old wire clothes hanger bent into shape with stockings stretched over them was WAY overrated. And like the store-bought Tinker Bell costume looked nothing like the real character.

So I did some research on YouTube and found the perfect way to make wings for only $10! So I sat down with my baby girl and watched Tinker Bell for the millionth time. And started to draw out her wings.

Next I thought about how I could make my daughter appear more like Tinker Bell. Since my poor baby barely has any hair I thought, what the heck, I will make her a wig too! So once again watched the Tinker bell movies. And drew out each angle of her head and how her hair laid. Then I thought that the best type of fabric to use would be yellow felt. Mainly since it has that “hairy” texture.

Then I thought about how I wanted her dress to be unique. And I thought about how much I had fell in love with the look of Tulle tutu dresses over the past year. So I decided why not make one for the costume. Since she didn’t have green shoes I figured green socks over a pair of shoes would be just as good.

For the wings I took a trip and bought 3 poster boards, gift wrap cellophane, spray glue, silver glitter paint, 16g wire and an exacto knife. For the wig I bought 4 pieces of felt (only used 3 but it is always good to have extra cause i would rather be safe than sorry), 1/2″ elastic, 1/2″ green ribbon and a bun maker scrunchie. Then, for the dress I bought 3 different shades of green 6″x25 yard of tulle rolls, 3/4″ elastic, and 2 rolls of 1″x3 yard ribbon. And finally for her “shoes” I went through her socks and, since she didn’t have green socks to match her dress, got a white pair and dyed them green.

Well like I said, I drew everything out, then made more trips to the store than I wanted before I started making anything. Then I started with the wings. I took the poster boards and glued them on top of one another with the spray glue. And I let them dry overnight. Then I laid my small drawing of Tinker Bell’s wings next to the poster boards. And I started drawing them according to the measurements of my daughter. Then I took the exacto knife and started cutting out the details of the wing. This turned out to be a big pain. After 3 days, sore fingers, many frustrated tears and one blade later I realized this might have been a bad idea.

But the show must go on. So I took the finished wing and laid it over, traced it to make the other half of the wings and prepared to finish the nightmare. The second half of the wing took me only 4 hours with breaks to rest my fingers. This was since I realized that I didn’t have to bear down so hard to cut the details. So naturally I was silently cursing myself for wasting 2 days on the first half of the wing. when the cutting was done I painted each side of the wings with the silver glitter paint to give them that sparkle the real Tinker Bell has in the movies.

When the paint was dry I sprayed both sides of each wing and laid them over the cellophane (on a flat surface) then laid cellophane over them, pressed down and let them dry over night. I then took the wire and bent it into a shape to fit the wings and make them more controlable while not being seen, then hot glued them to the “veins” of the wing in two places then connected them in the center with another piece of wire.

In order to attach them to her while allowing them to be removed when she was in her car seat, I made a bow from the two types of ribbon I had in order to hide the wire I used to attach the wings together, and cut 2 long strips of ribbon glued one end of each to the bottom of the bow and i was able to wrap them around her arms and tied behind her back.

For the Wig I took the bun scrunchie and wrapped strips of yellow felt around. Then I hot glued them until it was covered. Then I cut the elastic to fit my daughters head sewed the ends together. I measured from where the elastic sat on her head to the crown of her head to see how long the strips of felt should be. Next I looked the the drawing I did of Tink’s hair and started cutting strips to match. Then overlapped and hotglued them together, then to the elastic in select places, (so that it was still able to stretch) and then to the bottom of the Felt bun and VIOLA! the wig was done!

For the Dress I took the Tulle rolls and measured strips to 36″. Then, I measured my daughters chest under her arms with one strip of elastic. And just over her belly with another strip. Then I sewed the ends together. Since I wanted the dress to fall just above her knees I folded each strip of tulle in half and tied the center to the elastic alternating colors by 2. One of the colors was a golden green with glitter. I got this color in order to make the dress appear more magical. Or rather more like it was infused with pixie dust. This however I would not recommend unless you like tons of glitter all over you, your kid and EVERYTHING in your house.

Then I chose a regular green and a lighter apple green. When the top strip of elastic was well covered by the tulle I then wrapped ribbon around the elastic and in between the strips of tulle. Next, I hot glued the ends together where they met. Then I pulled each strip of tulle 4″ down and tied them to the second piece of elastic to give it the dress appearance. When all the strips of tulle were tied to both pieces of elastic I then measured out another piece of ribbon. Then, I found the center put a dot of hot glue and glued it to the front center of the bottom piece of elastic. Then, I let the rest of the ribbon flow free. Since when she wears the dress the ribbon can be wrapped around and tied in a bow at the back.

For her “shoes” I dyed a pair of white socks green pulled them over her regular shoes. Then I hot glued cotton balls to the top close to the toe. AND THEN I WAS DONE! YEY!!

I finished the whole Tinker Bell costume the day before Halloween. I let my daughter model it for the first time for my sister Halloween morning. My daughter was so happy and amazed by her reflection in the mirror. She kept saying “Tinker Bell” while pointing to herself. And my sister was flabbergasted! She just kept saying how amazing the whole thing was. Then that night came the true test! How would strangers react to it?

Well EVERY person that walked by us stopped and rained down complements! It was crazy!!! I had people asking me if and how much I would charge them to make their kids costume next year! Don’t get me wrong I love to be told how good a job I did. But it took us twice as long to get to and from the candy givers because of it. Lol. I enjoyed it and so did my baby girl. Unfortunately we were not able to enter into the one local costume contest in our area because of our lack of transportation. But I am sure that if we had it would have been very good for us.

Thank you for reading my rambling. I hope you enjoy this Tinker Bell costume as much as I did making it and seeing the happy look on my daughters face. 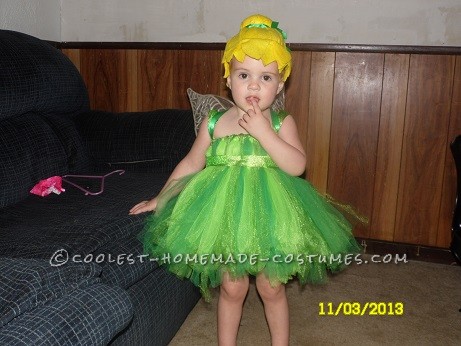 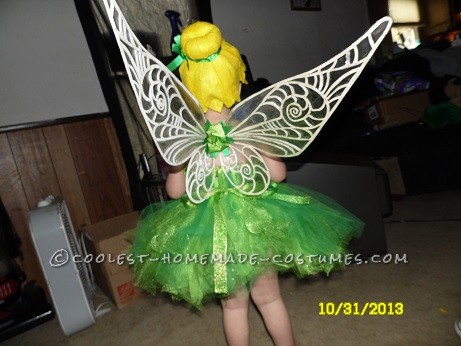 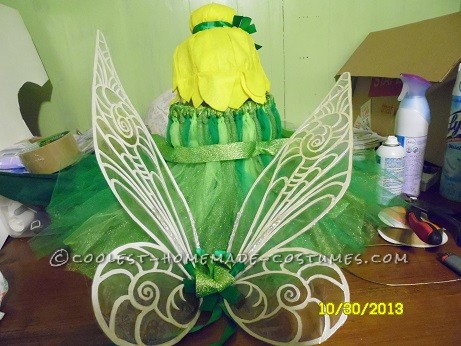 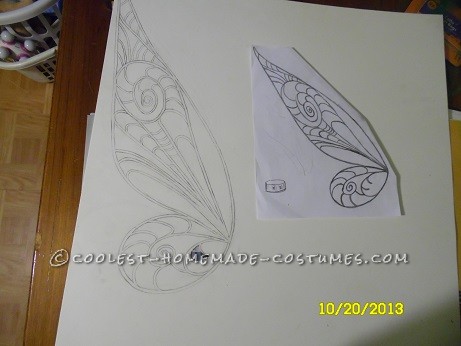 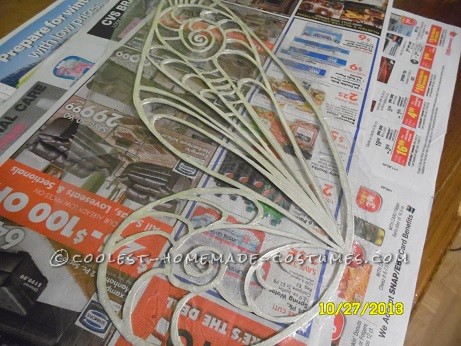 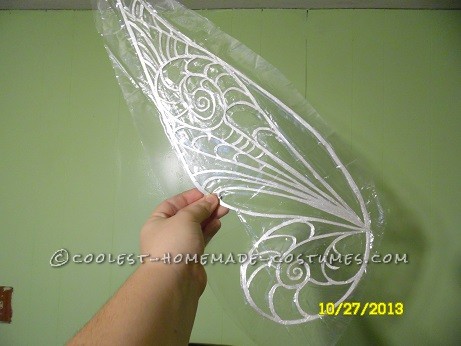 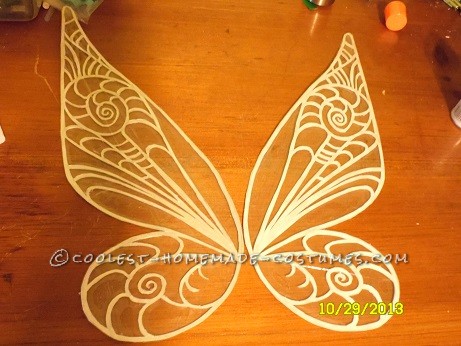 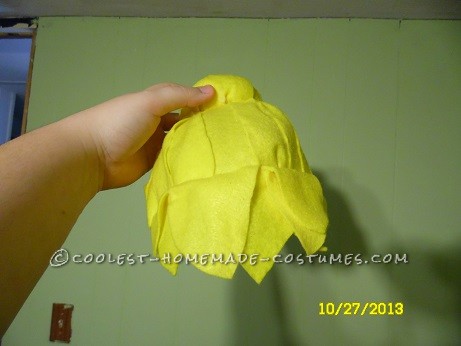 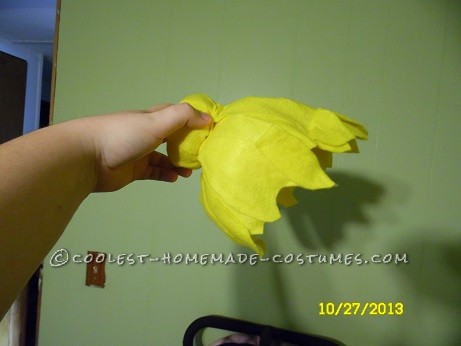